Curzon Street: The former Principal Building of the Birmingham Terminus for the London-Birmingham Railway

A Grade I Listed Building in Nechells, Birmingham 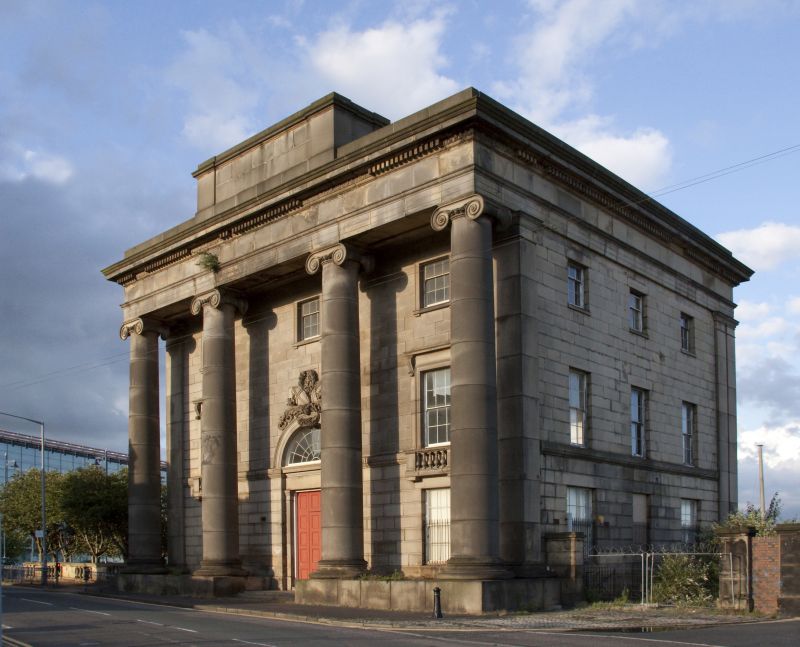 Entry Name: Curzon Street: The former Principal Building of the Birmingham Terminus for the London-Birmingham Railway

The Principal Building of Birmingham Station, the northern terminus of the London and Birmingham Railway, designed in a Greek Revival style by Philip Hardwick and opened in 1838.

The Principal Building of Birmingham Station, the northern terminus of the London and Birmingham Railway, designed in a Greek Revival style by Philip Hardwick and opened in 1838.

MATERIALS: Sandstone ashlar with a lead and slate roof.

PLAN: the building is approximately square on plan, and has three storeys with a basement. The interior plan revolves around an entrance and staircase hall, at the centre of the western side, which extends upwards from the ground floor, through the building to an octagonal lantern. As originally built, the building had waiting and refreshment rooms at ground floor level, with the board room and administrative offices at first floor level and further offices above.

EXTERIOR: the principal, entrance front faces west onto New Canal Street and has a giant order of four Greek Ionic columns which are unfluted and rise from a podium. These support a full entablature with stepped architrave, blank frieze and dentilled cornice which continues around all four sides of the building. Above this is a blocking course and, to the central bay above the entrance is a blind attic with projecting corners which contemporary prints show bearing the words ‘LONDON AND BIRMINGHAM / RAILWAY’ (now removed). Behind the colonnade are three bays, with pilasters in antis at the corners. There is banded rustication to the ground floor and a projecting band at the level of the first floor window sills and both these features are common to all four sides of the building. The centre has panelled double doors, above which is a fan light, with radiating, metal glazing bars. Immediately above this is a large, carved cartouche incorporating the arms of the London and Birmingham Railway Company. To either side are sash windows of 3X4 panes. Similar sashes at first floor level have bracketed, projecting lintels and shallow, stone balconies with vase-shaped balusters. The three, second-floor sashes are of 3X3 panes and have projecting surrounds with square brackets.

The north and south flanks are essentially similar; each has three bays with a central doorway to the ground floor and sash windows at either side and to the upper floors. The northern front has superficial indications of the addition of a four-storey hotel wing by Robert Dockray in 1841 (demolished c. 1980).

The east front, which formerly faced towards the station yard, has three bays, with two engaged Ionic columns to the centre, flanked by antae. The central bay has tripartite windows to each floor, and the first floor window of the board room has a triangular pediment supported by brackets, and a balcony. Lateral windows are sashes of the same types seen on the flanks.

Extending to the north and parallel to the western wall of the building is a portion of stone walling which previously enclosed the area in front of the hotel extension of 1841. This has vase-shaped balusters and rectangular piers.

INTERIOR: the entrance and staircase hall is entered from the doorway on the western side. There is a later-C19 canted wooden lobby with glazed upper walls immediately inside the door and a similar porter’s lodge to the southern wall. The open-well staircase has stone treads and iron balusters of circular section with a mahogany handrail. The eastern wall has a three-bay screen of columns to both the ground-floor and first-floor levels. That at ground-floor level has square columns with pilasters in antis. At first-floor level are two baseless, Greek Doric columns without fluting to their shafts, but with ridges (annulets) to the lower capital, also with square pilasters in antis. The first-floor screen has a full entablature. Doors above basement level have four or six panels and are generally original, with panelled surrounds. Those connecting with the entrance hall at ground and first-floor levels have glazed, semi-circular fanlights. The former Secretary’s Room at first-floor level retains a fire surround and two rooms have cornicing of the original pattern and one room has panelling below the dado.

The railway line between London and Birmingham was engineered by Robert Stephenson for the London & Birmingham Railway Co. (L&BR) and built between 1834 and 1838. The London terminus was located at Euston Grove. The line required substantial engineering works throughout much of its length, passing through the Chilterns at Tring, and having Rugby and Coventry as the principal intermediate stops.

Birmingham Station, the northern terminus, was situated about a mile to the east of the town centre. It did not continue into the heart of the city at that time for topographical reasons. The company purchased the site, known as Nova Scotia Gardens, from Lord Howe. It was an area of market gardens and fields on the edge of the town, bounded by Curzon Street (north), New Canal Street (west), Banbury Street (south-west), and the Digbeth Branch Canal (east and south). The bridge built in 1838 to carry the railway over the canal is listed (Grade II).

From the outset, it was envisaged that the site would be shared by the L&BR and the Grand Junction Railway (GJR), whose line between Birmingham and Liverpool had opened in July 1837. The LB&R, as the primary developers, had a head start, and used the site at Nova Scotia Gardens to their best advantage, leaving an awkwardly-shaped triangular parcel of land for the GJR.

Euston opened to passengers on 20 July 1837 and Birmingham Station followed on 9 April 1838, when the LB&R line to Rugby came into operation. The first uninterrupted service between Euston, London and Birmingham Station ran on 17 September 1838 and covered the 112 miles in 4 hours, 48 minutes. It was the first railway journey that joined London to a major provincial city.

Philip Hardwick was appointed as architect to the London and Birmingham Railway in 1836 and in addition to acting as surveyor for the company, negotiating the sale of land along the proposed railway route, he designed the buildings at Euston Grove (notably the Propylaeum – now demolished) and Curzon Street. At Birmingham Hardwick designed the three-storey, classical building which he called the Principal Building, and he also designed the range of waiting rooms to the north side of the station yard. The assembly of buildings also included a train shed, designed by John Joseph Bramah, an engine house and a turntable. The contractors were Grissell and Peto and the work cost £26,000 (as compared with £35,000 for the London terminus at Euston Grove).

Hardwick’s drawings for the Principal Building also indicated his intended function for each room. The ground floor was to have had a General Office, a Traffic Office and waiting room and lavatories, while the first floor was reserved for a boardroom and the Secretary’s and assistant secretary’s offices. On either side of the main block were intended to be portes-cocheres to protect passengers from the weather, with gates giving access to the station yard. Although planned, the southern gate appears to have been built at an angle and the porte-cochere may not have been constructed due to the presence of a row of houses in independent ownership. The plan was clearly in flux during construction, and continued to be after its completion. The Times of April 1838 (see SOURCES) recorded, in anticipation of the opening, that the ground floor would have a refreshment saloon approached from the arrival side, which seems to have taken over the space of the planned Traffic Office. In 1839 Hardwick prepared an estimate for the conversion of the board room for further refreshment space. The building, thus adapted, was called first the Victoria Hotel and then the Queen’s Hotel, although the word hotel referred to the provision of refreshment only. In 1841, however, a wing was added to the north of the Principal Building which did include three floors of bedrooms, together with additional space for refreshment on the ground floor. This supplementary building was designed by Robert Benson Dockray, the assistant of Robert Stephenson, the company’s engineer, and required the demolition of the porte cochere and station yard gates on this side. The functions of the various rooms in the Principal Building during its time as an hotel are not known, but the original internal plan was little altered.

The situation of the station and hotel, roughly a mile from the centre of Birmingham, was seen as a disadvantage, and in 1846 an act of parliament was passed for a ‘Grand Central Station’, which was to become known as New Street. By 1854 all services had been directed away from Curzon Street and the hotel closed in the same year. The site was then converted to become the London and North Western Railway goods depot and this work was completed by 1865. Little subsequently changed on the site until its closure in 1966. The Principal Building and its hotel wing served as offices for the goods station. During the Second World War the goods station was subject to bombing and an oil bomb and an incendiary bomb hit the Principal Building and other bombs fell nearby.

Demolition was mooted in 1970 and again in 1978 but resisted. Ownership of the site passed to Birmingham City Council in 1979 which undertook an extensive programme of restoration and general repairs between 1979 and 1982 which included demolition of Dockray’s hotel wing. The building has subsequently been used as office space and in 2003 planning permission was granted for its conversion for the Royal College of Organists. It is currently (April 2015) vacant, but it is intended that it should form part of the development of a new station for the high-speed HS2 inter-city line.

The former Principal Building of the Birmingham Terminus for the London and Birmingham Railway, designed in a Greek Revival style by Philip Hardwick and opened in 1838, is listed at Grade I for the following principal reasons:

* Architectural distinction: the building was designed by an important architect of the early and mid C19 and is a fine example of Greek Revival classical architecture applied to a revolutionary new type of building;

* Historic interest: a distinctive part of the terminus to one of the pioneering English, long-distance, inter-city railway lines;

* Degree of survival: despite some alterations and replacements, the external form, the plan and the great majority of the original fabric remains in situ.