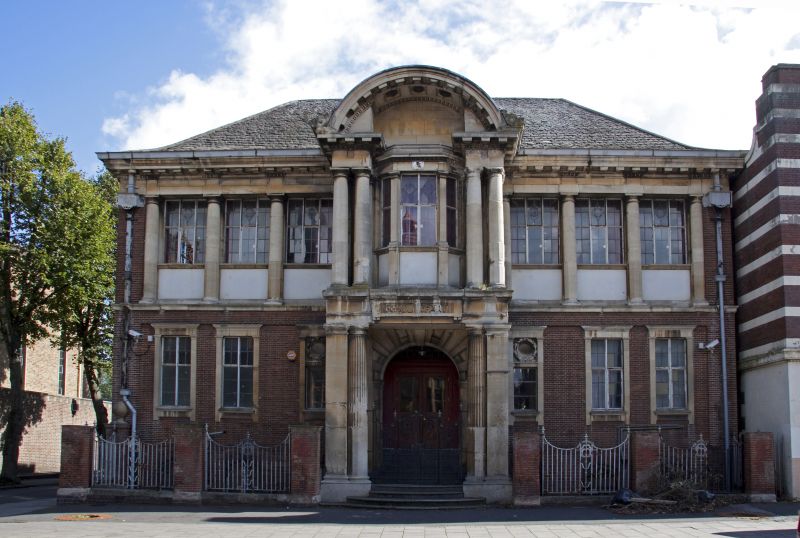 Built as the first municipal branch School of Art in 1899. A fine "Wrenaissance"
design by W H Bidlake with the typical combination of Birmingham Arts and Crafts
detailing and quality materials. Compact 2 storey and semi-basement front block
of red brick with Bath stone dressings and orders. Slightly lower rear studio
wing. Hipped graded slate roof, slightly swept out to the eaves. Projecting
from the centre of the 7 bay elevation to the ball finialed piers and railings
of the area, is a monumental 2 storey ashlar portico-porch. Fluted Roman Doric
columns contained by piers of the same order are set on a bowed graded flight of
steps leading up and through a massive spaced voussoir arch to the double glazed
panelled doors - a powerful tunnel like approach. Above the porch entablature
rises an imposing aedicule of coupled Doric columns backed by pilasters with
deep sections of entablature to the massive almost semi-circular open pediment
(scrolled antae, caisson panelled soffit). The order is returned on string course
as an engaged colonnade across the flanking bays of the first floor but set in antis
to the brick quoin pilasters. Ashlar frieze and bracketed eaves cornice, capped by
paterae studded gutter. The first floor of the porch contains an ashlar pilastered
bay window, its entablature breaking forward for the return sections of entablature
beneath the aedicule pediment. The intercolomniations of the flanking bays are
fully glazed with leaded casements, caveto sills and deep plain aprons the column
drums faceted below sill level as those of porch. In contract the ground floor
windows are narrow, single and 2-light transomed casements in ashlar pilaster
frames with entablatures, those next to the porched with carved stone wreaths in
panels replacing top lights. Semi-circular spaced voussoir arches to basement
windows reflecting the inner arch of the porch. Fine Arts and Crafts leadwork to
rainwater goods and wrought iron work to window latches. Three bay return to front
block, similar but simplified detailing with pilasters to first floor. Recessed
link with simple round headed leaded windows, to rear studio wing. The latter has
5 bays divided by shallow chamfered brick piers. Large leaded ground floor windows
of simplified Norman Shaw type. Blind rendered panels to first floor. Soffit
eaves on large modillion brackets between the terminal piers which are carried up
to contain the slate mansard roof with studio lights. The main entrance leads in
to a square 3 bay pilastered hall. The opposite end is open to a double staircase
with Doric columns flanking the central descending flight, through an archway, to
the lower ground floor. The hall has a central band of stone flagged paving,
returned to feet of staircases, flanked by herringbone brick paving. The double
stairs rise to a mezzanine landing which returns with balustrade across the archway
to the lower ground floor. At this level similar Doric columns to those in hall rise to
support quadripartite vaulting over the stairwell and the landing. This subtle and
restrained Baroque spatial development leads on through the central axis to corridors
on both lower ground and mezzanine floors. That on lower level lit by doorway at end,
whilst the upper corridor has 2 circular skylights. Interior otherwise simple
painted brickwork for functional studios use. Internal corridors have large semi-
circular arched leaded windows into studios and exhibition halls.