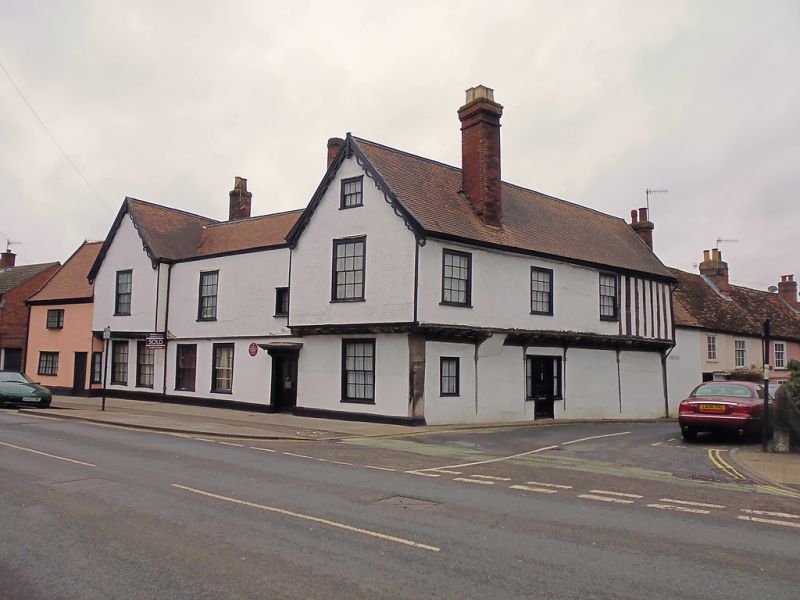 House, now divided into 2. C15, refronted in the C18.
Timber-framed, with some timbering exposed, but mainly
rendered; plaintiles. On a corner site. Half-H form with a
central range and 2 gabled and jettied cross-wings: on the
east the wing is jettied on 2 sides with a moulded bressumer
supported by 5 brackets with moulded capitals and shafts along
the side and a corner-post bearing the damaged figure of an
angel. At the north-east end is a small section with close
studding exposed on the upper storey. Each of the gables has
pierced and fluted C19 bargeboards with spike finials. The
centre wall has been built up on the upper storey above the
level of the original wallplate.
EXTERIOR: 2 storeys and attics; 12-pane sash windows are
spaced irregularly across the front, 3 to the upper storey on
the Eastgate Street front and 5 to the ground storey; 3 along
the upper storey on Barn Lane, all in flush cased frames. The
Ancient House has a 4-panel door in a moulded architrave and a
flat cornice hood on shaped brackets. Oak House has a panelled
door on the Barn Lane frontage flanked by 2 narrow windows.
INTERIOR: not inspected.
(BOE: Pevsner N: Radcliffe E: Suffolk: London: 1974-: 152).