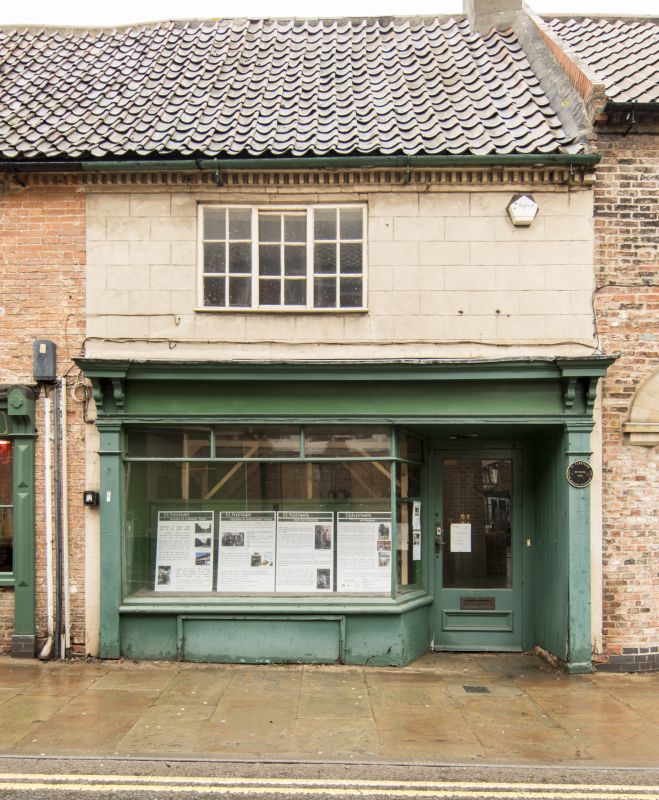 House and shop. Medieval, with later alterations. Front range has C14 timber
framing to rear (west) wall, and mid C18 rebuilt front (forming part of a contin-
uous frontage with numbers 47 and 49, qv), and a later C19 shopfront. Rear (west)wing has C15 timber framing with later stacks and floors. Brick to front,
rendered and incised in imitation of ashlar; brick stacks (that to front range
rendered). Rear wing with full timber frame of 2 bays with brick infill, rendered to south side and west gable end. Pantiled roofs throughout. Plan: 3 rooms, with single shop room to front; and passage into rear wing flanked by stack to left and larder and staircase to right, leading to the two rear rooms, the parlour to rear left, and the kitchen to rear right. Front: 2 storeys, one first floor window. Late C19 shop front has recessed part-glazed panelled door to right and plate-glass window to left with smaller panes above, all in wooden surround with pilasters and entablature with plain frieze, carved brackets above the pilasters, and moulded cornice. 3-light horizontal sliding sash to first floor. Closely-dentilled brick eaves cornice. End stack to right. Rear wing: 2 first-floor windows. Small lean-to on left contains board door to kitchen with plain barred window to its right; 16-pane sliding sash to parlour on right. First floor has 12-pane sliding sash to left and 2-light sliding sash to right with original leaded panes to one light, 6 panes to the other. Large external gable stack of two builds. Massive ridge stack at junction of rear wing and front range. North side or rear wing has 2 bays of timber framing exposed at first-floor level, with a central wall post, first-floor bressummer, wall plate, vertical studs and a straight brace from the bressummer to the west corner post. The five panels of the west bay all retain their medieval brick-on-edge infill, three of them still partly covered with their original plaster; the larger central panel here, with infill of C18 brick, was probably originally a window. The four exposed panels to the east bay have C18 and C19 brick infill. Cracks in the render to the south wall and gable end reveal the positions of other timbers.
Interior: Front shop room has a fireplace with a mid C18 mantelpiece with fluted frieze and dentilled cornice, and an exceptional series of late C19 advertisements for Lloyd's News-paper papered onto the ceiling; a domestic scene and a London railway station. Parlour has mid-late C17 ovolo-moulded beam and late C19 cast-iron fire range. Kitchen has exposed ceiling joists, stone sink and brick-built boiler. Winding staircase with larder beneath. In a cupboard beside the stack at the top of stairs is an exposed section of heavy timber framing of C14 character, with a wall post and pair of curved up-braces to the wall plate, presumably representing part of a former rear wall to the.front range. The framing of the wing itself represents a former open hall, probably dating to between the mid C15 and early C16. Partition walls to the two rear bedrooms have been inserted in the former central open truss; the tops of the two large arch braces are visible in the door heads. Other sections of timber framing are indicated by irregularities in the wall surfaces. The wing has a pegged oak crown-post roof with single butt-purlins; the west bay survives virtually intact, the east bay has been re-arranged to accommodate the inserted stack. The two crown posts have jowled heads, single slightly-curved up-braces to the collar purlin, and straight down-braces to the tie beams. Both the collar purlin and up-braces have plain chamfers. In the west truss the panels below the down-braces have brick infill: original brick-on-edge on the north side, and later C17 or c18 brick on the south. The east truss (formerly open below) has chamfered principal rafters, and retains a large fragment of original lath and plaster infill beside the crown post. The collar purlin continues into the stack, but there is no sign on the crown post of a mortise for an up-brace to the collar purlin on this side. In the east bay the original rafters have been shortened to make way for the stack, and the roof has been reset at a lower level to the east, beyond the stack, where one pair of rafters retain their collar; the other rafters all have slots for collars now missing. The front range has a C18 clasped purlin roof. An important building, notable for its multi-period survivals and lack of modern alteration. The most complete example of a medieval town house in South Humberside, and one of very few in Lincolnshire and Humberside outside of Lincoln and Beverley. The timber framing reveals stylistic links with examples known Hull (all now demolished) and surviving buildings in York. The series of C19 newspaper advertisements in the shop (formerly a barbers) is probably a unique survival.