Fasbourne Hall with Attached Garden Wall at the Eastern Corner 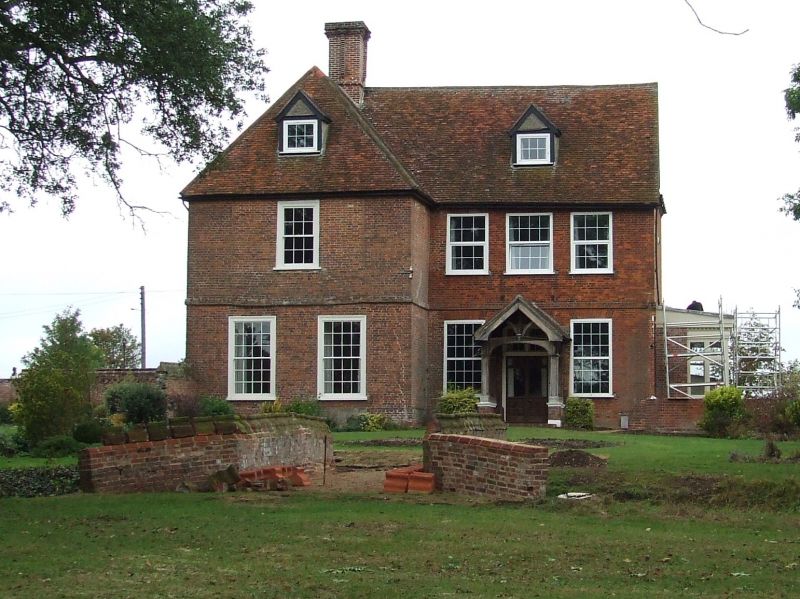 1/52 Fasbourne Hall with
attached garden wall at
9.12.55 the eastern corner

Farmhouse, formerly manor house, early C17 with major C19 alterations;
possible earlier core. Red brick; a moulded band at 1st floor level.
Plaintiled roofs; the main section (originally a crosswing) is hipped; one
gabled C19 dormer with C20 casement. An axial C17 chimney of red brick; a
square shaft with a pilaster on each face and an original cornice of moulded
brick. Small-pane sashes; some early C19 but most renewed c1980 with p.v.c.
sashes and casements. The former main range was truncated and remodelled in
mid or late C19; prominent entrance porch of c.1900; timber-framed with
decorative work, plaintiled roof, a pair of glazed panelled inner entrance
doors. To right is in attached set-forward late C19 greenhouse, to which is
attached a C17/C18 garden wall of red brick, about 2m high with a sawtooth
course beneath moulded terracotta copings. It extends about 20m south-east
-from the eastern corner.