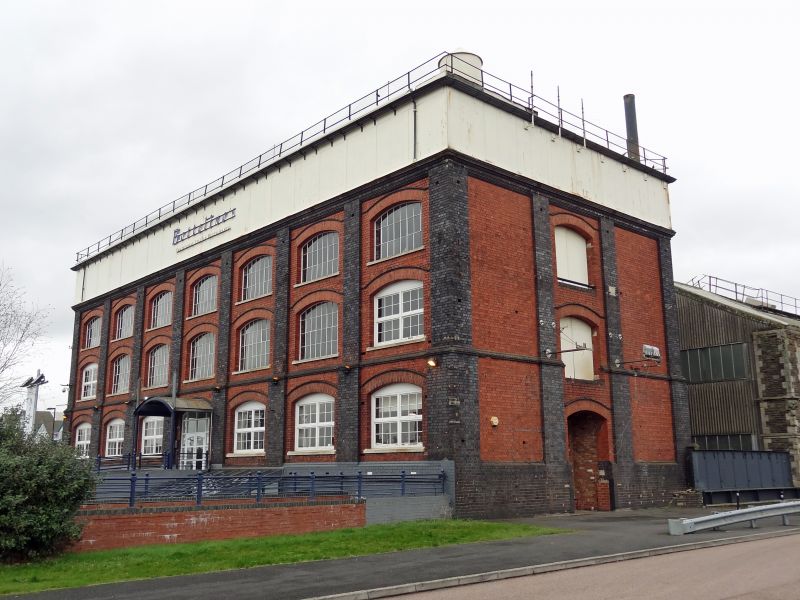 A pattern store, dating from 1897, designed and constructed by the Great Western Railway for the Swindon Railway Works. The building is surmounted by a four-section water tank which covers the entire roof of the building.

MATERIALS: The building is constructed from red brick and blue engineering brick, and cast iron for the water tank.

PLAN: The pattern store is a simple rectangle on plan, oriented north west-south east with an enclosed corner stairwell rising to the second floor.

EXTERIOR: It has three storeys and a basement, and is a seven-bay range, three bays deep, set on a plinth which steps forward slightly, with a string course between the ground and first floors. In the long elevations, the bay structure is articulated by wide pilasters of blue engineering brick, between which are segmental headed window openings with moulded brick arches set in red brick panels. The windows are a mixture of original, multi-paned metal windows and later, timber-framed casements. The returns have similar blue brick pilasters, between which are red brick sections, the central bay housing pairs of round-arched, metal double doors to the ground, first and second floors. The south western, entrance front has a C20 glazed central entrance doorway. The basement has a lean-to conservatory to the central five bays. The rear of the building, facing Rodbourne Road, is set on lower ground than the front of the building, and so consists of five full storeys and a high plinth. It is similar to the main elevation, but has a small entrance door in the basement of the sixth bay. The whole building is surmounted by the cast iron water tank, which has external riveted seams and a continuous handrail. The tank is covered in part with modern shallow-pitched roofs, and in part with a flat roof covered in mineral felt.

INTERIOR: The interior of the building is of fireproof construction, based on rows of jack arches formed from brick with transverse beams, carried on piers made from made from riveted steel plate, some of which are incised GWR. In the north west corner is an enclosed stair which rises from floor to floor, from the ground floor to the second floor. It is accessed from each floor by round-arched doorways housing solid metal doors, to maintain fire separation. The stair has a plain timber handrail; its steel treads are covered in small timber blocks. The basement has a brick floor, now covered; those to the remaining storeys are pine block. The ground floor and basement have been converted to house a restaurant, using lightweight cladding and partitions, behind which much of the original structure survives. The first and second floors have not been converted. A timber trapdoor is set into the floor of each of the upper storeys, rising up through the centre of the building. The taking-in doors on each floor run on quadrant metal tracks let in to the wooden floors. The second floor is slightly less high than the lower floors, and its ceiling is the base of the massive water tank which forms the roof of the building. At the south west corner a section is bricked off to create a small office, which houses a brick chimney breast with a plain, segmental arched opening. A similar fireplace is situated in the opposite end of the building on the second floor. This floor houses a massive pipe which brought the water from the roof into the building, together with some ancillary piping. At the south east end of the second floor is a cast iron spiral staircase which rises up through the tank to the roof, terminating inside a metal turret with a conical roof.

HISTORY: The Swindon Railway Works were begun in 1841 as a repair depot for locomotives on the Great Western Railway. The site had been chosen as a convenient point on the London-Bristol line, as Swindon was the point at which the Cheltenham branch of the GWR joined the main line. The works rapidly expanded into a factory for the building of locomotives and wagons, and by 1851, was employing 2,000 men. In 1868, a further period of expansion began, as a new carriage works was constructed on the site. A vast new locomotive and tender building was constructed in 1873 to the west of the works, reaching to the eastern side of Rodbourne Road. It was agreed by the GWR directors on 22 July 1896 that a new pattern store would be built, at a cost of £4,000, as the old pattern stores were overflowing, and many patterns were being stored outdoors under sheeting. The new store was to be constructed by GWR workers using materials from its own stores, under the supervision of William Dean, Locomotive and Carriage Superintendent for the works, and the order was placed the following month. The pattern store was the first permanent building to be erected on the area of land to the west of Rodbourne Road; the site had been acquired by GWR in 1884, and had hitherto been used as a store for redundant broad-gauge locomotives. This area was heavily developed by the firm in the period to 1920, with massive workshops built to the west of the pattern store. The location of the store was convenient, as the foundry was situated just across Rodbourne Road, reached by a covered footbridge (now demolished), which allowed easy movement of patterns to and from the store. Patterns were made in 'H' shop, to the north of the foundry, keeping the related functions close to each other. The pattern store was later also used as a pattern makers' shop, and remained in use until the works closed in 1986. Following the nationalisation of the railways in 1948, the works became part of British Rail Engineering; after 1960, with the move to diesel, the works began to contract, moving almost entirely into the former locomotive works. By 1984, large parts of the site were becoming redundant, and it closed in 1986. Large elements of the works have been demolished, and those buildings retained have been converted to mixed office and retail use, with one former shop housing the Museum of the Great Western Railway. The pattern store is currently (2008) home to an Italian restaurant.

REASONS FOR DESIGNATION DECISION:
The Pattern Store is designated at Grade II, for the following principal reasons:
* A rare survival of a purpose-built pattern store, constructed by and for the Great Western Railway works in 1897
* Its massive cast iron water tank, which surmounts the entire area of the building, remains in situ
* The building has survived without later extension or major alterations, and retains its original layout and fireproof stairwell
* Group value with the adjacent Grade II listed engine turntable (qv), and the other listed buildings of the former GWR works to the east of Rodbourne Road