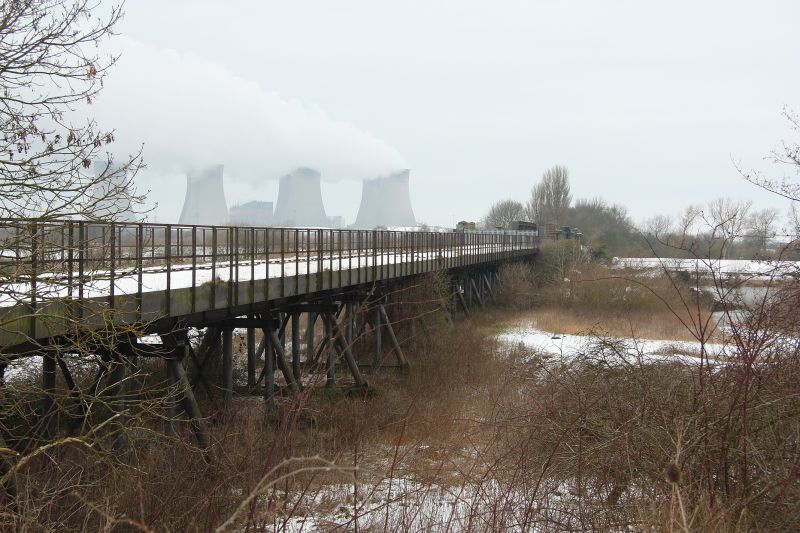 Torksey Viaduct is a railway viaduct completed in 1849 and designed to span the River Trent and its flood plain. Different engineering solutions were deployed to carry the line over the main river channel and the wider flood plain, including a very early use of box girder construction for the river channel section.

A railway viaduct built 1847-9 and designed by the engineer John Fowler to span the River Trent and its flood plain on the Lincolnshire-Nottinghamshire border near the village of Torksey in Lincolnshire.

MATERIALS
The viaduct is constructed of iron box girders and cast iron columns and beams, supported by ashlar and coursed masonry abutments and a central pier at its western end, and with an earth embankment terminating at a brick abutment with ashlar dressings at the eastern end.

PLAN
The viaduct is formed of three distinct sections, with two box girder spans over the river channel at its western end, twenty shorter spans carried on trestles over the subsidiary river channel and flood plain and an embanked section extending from the trestle section to the Gainsborough to Lincoln road at its eastern end.

EXTERIOR
The western end of the viaduct is formed of two, iron box girder spans, each circa 30 metres in length and supported at each end by masonry abutments in the form of semi-circular, moulded arches with brick linings, each arch with a keystone set below a moulded band course. The advanced flanking piers are formed of coursed masonry with rusticated quoins, each pier rising from a moulded and domed base and terminating at a moulded entablature, blocking course and a shallow pyramidal cap. The east end abutment rises from the river channel and its base forms cutwaters within the river. The single, central pier is similarly detailed, and forms the junction between the two box girder sections. The parapets to the box girder sections are formed from riveted iron plates. At the centre of both box girder sections is a steel lattice girder inserted in 1897 to strengthen the structure. The northern side of the box girder section of the viaduct has been repaired and fitted with timber boarding to facilitate pedestrian access across the viaduct, together with a security mesh secured to the north face of the lattice girders.

The deck of the eastern end of the viaduct is comprised of twenty spans carried on trestles formed from hollow, cast-iron columns and cast-iron beams. Each trestle is comprised of a cast-iron base beam which supports vertical columns at the centre of each trestle, and raking columns at each end. The central pair of vertical columns are linked by diagonal cross bracing. The columns support a tranverse head beam which carries longitudinal beams forming the viaduct deck. The beam junctions are carried on moulded cast-iron pads located above each column. The longitudinal beams carry cantilevered deck beams which extend outwards on each side beyond the line of the trestles to support what appear to be C20 post and rail parapets. The majority of the trestles are formed of a single tier of four vertical columns. The viaduct increases in width as the trestle section advances westwards towards the box girder section. A number of trestles incorporate a fifth vertical column and an asymmetrical head beam which extends further outwards on the south side to carry a fifth longitudinal beam. Trestles at the west end of this section of the viaduct which stand in the secondary river channel are formed of two tiers of columns, the lower tier with seven vertical columns, the upper tier with both vertical and raking columns. The trestle section of the viaduct terminates at a short section of embankment which extends eastwards as far as the west abutment of the railway bridge which formerly spanned the Gainsborough to Lincoln road to the north of Torksey village.

The Torksey Viaduct was built by the Manchester, Sheffield and Lincolnshire Railway Company, for the railway's Clarborough Junction-Sykes Junction branch line. It was constructed between 1847 and 1849 and opened to traffic in April 1850. The viaduct was designed by the engineer John Fowler to span the River Trent near Torksey, on the border between Lincolnshire and Nottinghamshire. Fowler used the then innovative box girder form of construction to span the river channel, with two box girder sections supported by a central masonry pier forming the western section of the viaduct. The longer eastern section was designed to span a subsidiary channel and the river's flood plain, and comprises twenty spans carried on trestles formed of hollow cast-iron columns. This extends eastwards to join an embankment which terminates at the western pier of the bridge which formerly carried the railway over the Gainsborough-Lincoln Road. The opening of the viaduct was delayed by a number of months by the refusal of the Board of Trade's inspector to sanction the use of the viaduct because of 'doubts as to the ultimate security' of the structure. The box girder spans were strengthened in 1877 to take account of increased traffic loadings, and again in 1897, when substantial steel lattice girders were inserted centrally into both spans. The viaduct remained in use until the closure of the line to passenger traffic in November 1959, but now carries pedestrian traffic, a footpath route across the north side of the viaduct having been formally opened in July 2016.

The Torksey Viaduct, built between 1847 and 1849 by the Manchester, Sheffield and Lincolnshire Railway Company to span the River Trent and its flood plain, is listed at Grade II* for the following principal reasons:

* Historic interest: as one of the earliest examples of box girder construction, designed by the notable C19 railway engineer John Fowler;

* Structural engineering interest: as a complex early railway structure, incorporating three different engineering solutions to the need to deal with a range of different ground and environmental conditions;

* Completeness: as a largely unaltered example of a complex mid-C19 railway viaduct which survives in much the same condition at the present time as when it was in use;

* Legibility: the need for a range of different engineering designs for different parts of the viaduct, and the details of those designs survive in clearly legible condition throughout the structure.