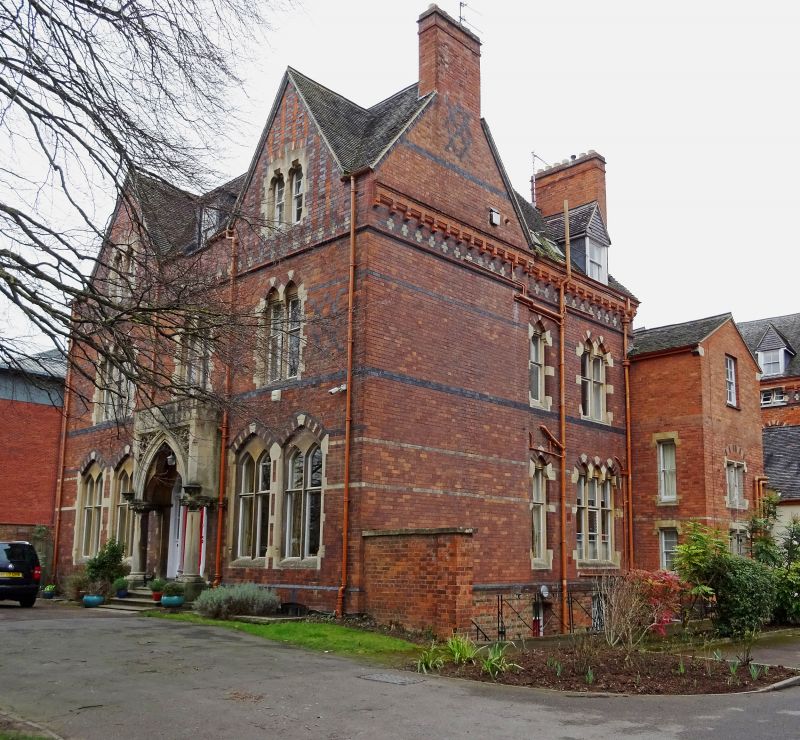 II
Boarding house. 1865-6,to the designs of William Hill Knight. English bond red brick with polychrome brick and ashlar detailing and dressings, including blue brick diaper work and strings; tile roofs with brick stacks, being multi-gabled with steeply-pitched blocks and tall stacks to the housemaster's house.

PLAN: Designed with housemaster's house to front (east-facing) block and dormitory block to rear. The former comprises a double-depth block with an axial hallway providing access to an axial passage that runs along the rear (south-facing) dormitory block which as a later extension to the west end and is returned at right angles to the north, the angle between the dormitory blocks and the rear of the housemasters' block being taken up by a common room, externally remodelled c1960.

EXTERIOR: Gothic Revival style. Two storeys with attics. Three-bay double-gabled east front to College Road. Panelled door with sidelights and overlight recessed within ashlar porch: this has a pointed moulded arch framing trefoil sprung from foliate capitals and with foliate carving in spandrels. Plate-glass sashes. The porch is flanked by two pairs of two-light transomed plate tracery windows,with ashlar keys to shallow-pointed polychrome heads; first floor has three similar two-light windows; gabled roof dormers. Left-hand return (south) gable has canted bay window with 1:2:1 fenestration, including carved floral motif to tympanum of central window, and string course with corner gargoyles to parapet; two-light shoulder-headed attic window. The central bay of the left-hand return is recessed, and is dominated by a tall two-light stair window with curvilinear tracery to its head, the left-hand bay having two-above three-light windows and a steep pyramidal roof with tall gabled dormers. Similar fenestration to right-hand (north) return, the rear of this having a steeply-pitched pyramidal roof to the service area and adjoining the externally remodelled common room.

Boarding house to rear has windows (mostly sashes) set under similar arched polychrome heads, of eight bays to left-hand (south) elevation (this having a doorway to its east end) and six to the east and west elevations of the block that extends to the west. Two-light casements below eaves, all lintels running into brick-modillioned cornice with band below (to sill height) of dark brick framing cross-shaped panels of yellow brick. Attached to rear left (south west) is a taller three-storey block with glazing-bar sash windows, including projecting first-floor bay window to prefects' room in left-hand return. The whole building is surrounded by a passageway, principally intended to provide light and air to the basement storey, the areas to the front of the ground-floor windows and the south elevation doorway being enclosed by finely-wrought iron railings, divided into panels which are curled to foliate ends.

INTERIOR: Housemaster's house has decorative plaster cornices, the drawing room to the south-east being particularly ornate, and fireplaces in Gothic Revival and classical style, that to the dining room being a particularly fine example of the former. Original joinery including panelled doors set in moulded architraves that have engaged shafting. Spacious stair hall has pointed arches spanning the load-bearing walls. Open well staircase with chamfered balusters set to closed string and with moulded swept handrail, the stout newel post with roll-moulded arrises being carved with floral motifs. Stained glass window with Renaissance portrait medallions depicting the four seasons and a circular flower motif. Open-well service stair to rear right, with pyramidal newels and stick balusters to closed string. Dormitory block: extensive basement (service) storey, its rooms having original doors and joinery including cupboards; eclectic classical fireplace in former butlers' pantry. Pointed arches to passages, these having doorways with overlights to the boys' rooms. The common room has arch-braced roof with shouldered posts from collar to truncated principal rafters at apex framing a quatrefoil formed of cast iron with foliate scrolls. Open-well cast-iron stair with stick balusters to south west junction of the dormitory blocks provides access to all floors .Long Dorm, intended for junior boys and located on the upper storey, retains the original boys' cabins, the partition walls having chamfered posts and rails; the arch-braced roof has laminated timber arches, additionally strengthened by wrought-iron tension bracing. Zoo dormitory is similar but smaller, lacking the original cabin partitions.

HISTORICAL NOTE: In summary,Hazelwell comprises a fine example of a Gothic Revival villa and an unusually complete example of a public school boarding house. This boarding house was built in 1865-6 to the designs of William Hill Knight. Knight was an architect who in his long career contributed to Cheltenham some of its most distinguished works of architecture, including the Synagogue of 1839 (listed grade II) the Cemetery Chapels of 1864 (one of the finest such groups in England and listed at grade II) and the Museum and Library of 1887 (grade II). He was a highly versatile architect, and when commissioned by the Reverend Samuel Green to design a boarding house for Cheltenham Boys College, for whom he was later to design their swimming baths (in College Baths Road, grade II), he chose the Gothic Revival style already chosen for the existing College buildings. In contrast to J. Wilson, the Bath architect who designed the first phase of the College in 1841 (listed grade II*), and who chose a Picturesque rendition of the Perpendicular style, Knight here worked in a typically High Victorian interpretation of Middle Pointed Gothic Revival. The red brick with polychromatic detailing combined with the use of plate tracery fenestration to provide a clear sense of stylistic continuity. The composition is exceptionally well-handled, exhibiting through its use of studied asymmetry and the integration of tall stacks into the massing of the front block, with its complex roof massing, and its juxtaposition with the rear wing some of the characteristics later seen in the Domestic Revival movement. The result is a composition of distinctive quality and character, there being a clear separation between the front housemaster's block and the rear dormitory wing, the former being more ornate and benefitting from fine polychromatic and carved stone detail, but the whole unified by a stylistic unity of approach and a skilful use of mass and compositional form. This use of High Victorian Gothic Revival reflects a clear understanding of the latest architectural trends, some of its leading Goths of the period being held in high regard by the Anglican establishment being also from the 1860s commissioned by Anglican public schools to design new school buildings and complexes in what was considered to be a 'muscular' Christian style. In this context, Hazelwell is highly unusual, for rather than forming an integral part of a collegiate composition or group (such as G E Street's Denstone College, Staffordshire,or William White's additions to Marlborough School, Wiltshire, all listed grade II) it was built as a private development by the first housemaster, Samuel Green, and formed part of an extensive development of boarding houses built for the expanding Cheltenham College, whose then principal, Dr Barry, intended to create a boarding house company.

Hazelwell is clearly the most architecturally distinguished of the group and, moreover,has retained its internal plan form and on the upper floor many of the partitions to the 'cabins' set under arched laminated timber ribs: these appear, on the basis of available evidence,to be unusually complete survivals relating to boarding school life in the nineteenth century (those at Downside Abbey, Somerset (listed grade II*) providing an additional example). Laminated timber was developed in the early nineteenth century, firstly in bridge design in Germany and then for the wide spans needed for indoor riding schools in France. In England they were pioneered by the Newcastle architect Benjamin Green who used the technique for railway bridges on the east coast line near Newcastle, and the new church built at Cambo (Northumberland) in the 1840s.