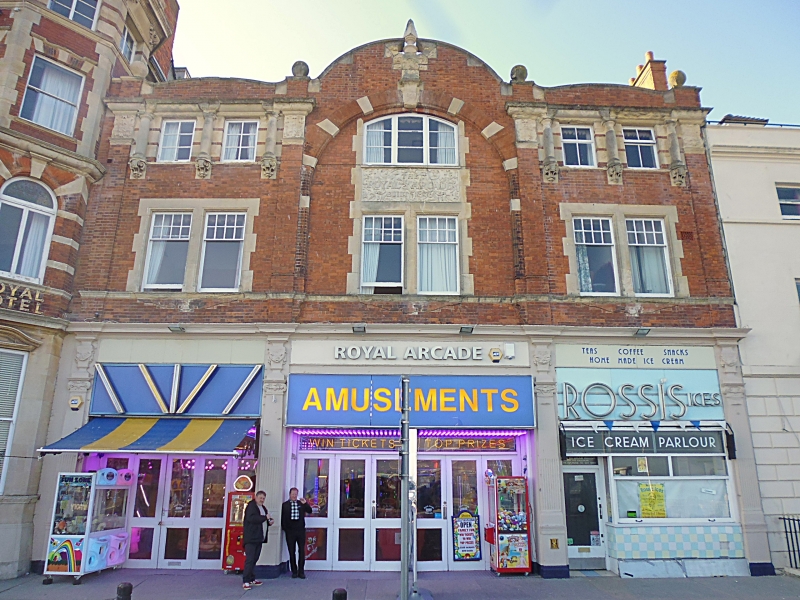 Arcade of shops, now amusement arcade. Dated 1896. Red brick
with Portland ashlar or painted dressings, lead and patent
glazing roofs.
STYLE: vigorous Art Nouveau but the ground-floor display
fronts to the Esplanade have been replaced.
PLAN: a long narrow building with central through arcade,
flanked by small separate rooms on an upper level; there are
shallow front and rear blocks with flat roofs and rich
frontages, with a raised central glazed roof with clerestory
ventilators; rear of building is in Gloucester Mews.
EXTERIOR: front is 3 storeys with 3 bays divided by brick
pilasters to deep stone entablature strips. At second floor
are paired 6-pane casements in striped brick and stone jambs,
with dividing pilasters having Byzantinesque capitals, to a
cornice, and on decorative corbels. The central lunette in 3
lights is continued through a stone apron to a pair of sashes
below, the upper sash only with glazing bars, and all
contained within a wide arch with alternating stone and brick
voussoirs. To each side at first floor is a similar pair of
sashes in flush stone surrounds.
3 late C20 shop fronts at ground floor are divided by 4
original Ionic pilasters with Jacobean entablature strips,
carrying a stone moulded cornice under a blocking course, and
surmounted by a plain sill band to the first floor. The
parapet has a high segmental centre with kneelers, and a
central feature carried through from the keystone of the main
arch; this is flanked by low undulating segmental parapets,
and each pilaster carries a stone ball finial. The central
stone apron bears a fine incised inscription: THE/ ROYAL
ARCADE/ BUILT 1896, and strapwork.
The elevation to Gloucester Mews is in 2 storeys, a simplified
version of the front treatment, in 3 bays with brick pilasters
at first floor, and 1:2:1-light original casements in banded
brick and stonework. The lofty ground floor has a wide pair of
central glazed doors with central slender cast-iron column
under a frieze with ROYAL ARCADE painted on. To either side
are plain ashlar panels under a deep frieze, and on stall
boards with paired sunk panels. Ground floor has 4 stone

pilasters on deep podia, and with Jacobean capitals and
entablature-strips, carrying a deep moulded stone cornice.
Above the first-floor cornice is a blocking course in
brickwork, with central undulating low segmental parapet
flanked by flat parapets, and with stone ball finials to the
pilasters.
The return wall to the right is in plain brickwork, and has a
series of casements at first-floor level. There are 5 brick
stacks at the eaves along both sides of the building, which
has flat roofing each side of the raised glazing.
INTERIOR: not inspected.
In matching style to the Royal Hotel (qv) and principally
included for the contribution which the facade makes to the
important group of listed buildings along the Esplanade.