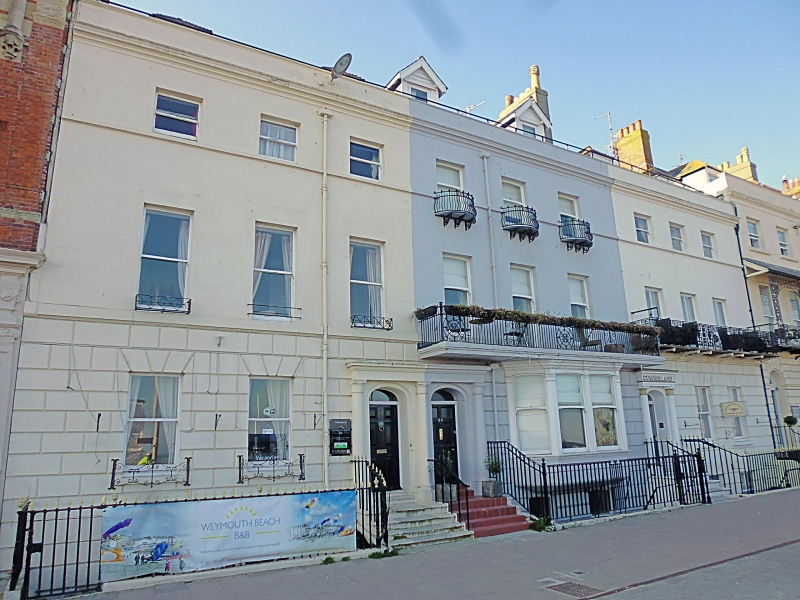 Formerly known as: Nos.7-13 ESPLANADE.
Terrace of 3 houses. c1790 (RCHME). Rendered, slate roofs.
EXTERIOR: 3 storeys, attic and basement, each 3 windows, all
plain sashes. Nos 93 & 95 have 2 hipped dormers, and No.94 has
Victorian gabled dormers. The square second-floor sashes have
been increased in size to No.94, cutting through the
continuous sill band, and this property also has a large
canted late Victorian sashed bay to the ground floor. Ground
floors are rusticated.
Nos 93 & 94 have 6-panel fielded doors under shallow
elliptical fanlights, paired, in half-columns to fluted
neckings and square capitals to a frieze and cornice; they are
on 6 steps with nosings (No.93) or tiles (No.94). No.95 has a
single door, to the left, the same, but with complete
entablature, and on steps with nosings.
The original balcony, on cast-iron brackets and with
decorative balustrade remains to No.95, but has been removed
from No.93. The middle property has a replacement balcony and
balustrade above the bay. Moulded cornice, blocking course and
parapet, deep brick stack to the right of No.94.
INTERIOR: not inspected.
SUBSIDIARY FEATURES: spearhead railings with standards and
returns to the doorway are retained to Nos 93 & 95, but have
been replaced with later work to No.94.
(RCHME: Dorset, South-East: London: 1970-: 355).