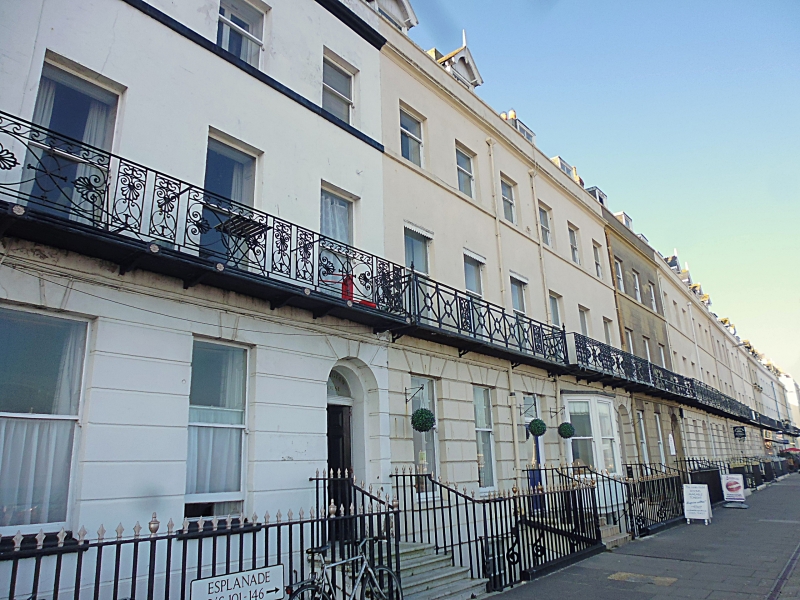 Terrace of 15 houses. c1792-1805 (RCHME). Rendered, slate
roofs. A straight terrace, with mansard roofs.
EXTERIOR: 3 storeys, attic, and basement, each 3 windows, all
plain sashes, those to the first floor brought down to floor
level, most with balconies. Each house has 2 dormers; these
are raking dormers to Nos 101, 103-105, 108, 110 & 113, the
remainder having Victorian gabled forms, with shaped
barge-boards and finials. In Nos 106 & 107 the parapet has
been cut down opposite the dormers.
Ground floor is rusticated, but channelled to No.101, and
there are decorative cast-iron balconies, replaced to No.101,
and removed from No.112; these are in 2 patterns, either with
anthemion, or a heavier infill. To the right of each property
is an arch and fanlight in a stepped reveal over a door,
panelled to Nos 101, 107 & 111-113; the fanlight to No.113 has
Y-tracery. A second-floor sill band, a moulded cornice,
blocking course and parapet, and 15 deep ridge stacks, many
with chimney pots. The doors are generally on 4 steps, with
nosings to Nos 104, 109 & 111-115, and spearhead railings with
standards, returns to the doorways, a gate and stone steps to
basement, to the left, except to Nos 110 & 112, which have
inserted shop fronts, and no basement areas.
The left return to King Street is plain, the right return has
3 windows and one small square light, plus a 2-storey wing
with slate mansard roof having 2 raking dormers above small
6-pane sashes, and a central basement light.
INTERIOR: not inspected.
Apart from the total loss of glazing bars from the sashes,
this terrace remains relatively unaltered, and is unusual in
having no inflections in height or in end bays, nor any bays
or oriels. The original intention had been for a large
crescent of 49 houses N of Gloucester Row, hence the
inappropriate name for this straight run of buildings.
(RCHME: Dorset, South-East: London: 1970-: 356).