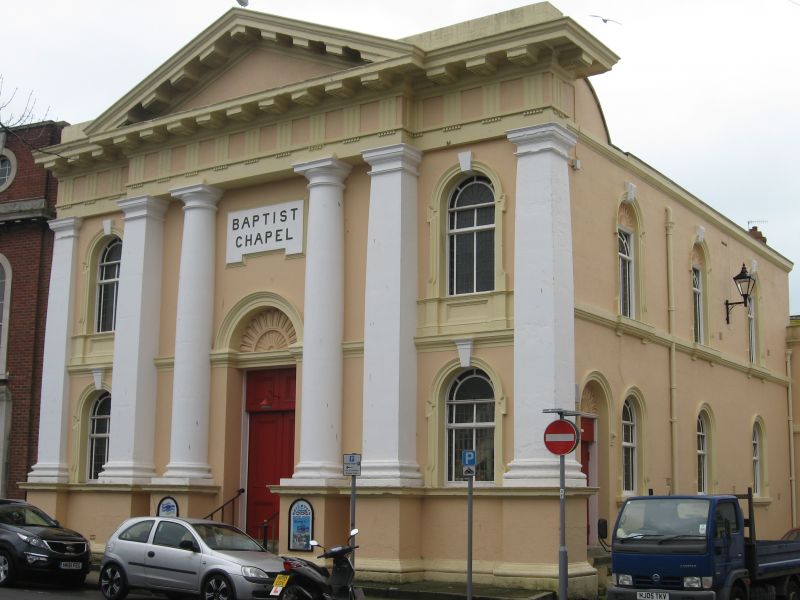 Baptist chapel and schoolroom. Built 1813-14 by George
Welsford, builder; enlarged, with galleries 1828, refronted
1859 and schoolroom added, re-pewed 1864 (Stell).
Rendered, slate roofs.
EXTERIOR: plain 2-storey block with grand main front to the N,
and with return to South Parade, where the schoolroom projects
forward, and at an angle. The front has a central pedimented
section with giant Doric half-columns in antis, flanked by
single outer bays with square Doric pilasters.
The central arched doorway with moulded architrave on imposts
over a pair of 2-panel doors with double radial fanlight, on 5
stone steps. To each side are arched casements at 2 levels in
moulded architraves with keystone, ears and flared feet.
The upper windows have aprons with a sunk panel between the
pilasters, and the ground-floor sills are formed by the
cornice mould of the pedestal storey, which returns for the
depth of the front wall only. The full Greek Doric
entablature, with blocking course, also returns at the ends.
Above the central door is a raised panel with 'BAPTIST CHAPEL'
inscribed.
The right flank has 3 arched windows at each level; at first
floor with moulded architraves, vermiculated keystone, ears
and flared feet on a continuous sill band, inflected to the
sills on 2 brackets; the heads are filled with plaster
fanlights. The ground-floor windows are similar, but without
keystone and sill band, and with glazed fanlights. The
casements have margin-panes, and leaded lights. To the left is
a small door, on stone steps, in a moulded architrave, and
with radial fanlight. The hipped roof is steeper than the
pediment slope. The front is linked to the side eaves by a
parapet quadrant. The schoolroom has a pair of panelled doors
facing N, an the return front is in 2 storeys with 3 windows,
all margin-pane sashes in 16-panes, to a sill band at first
floor. A moulded cornice and blocking course, returned at the
S end, which is in brickwork.