A Grade I Listed Building in Melcombe Regis, Dorset 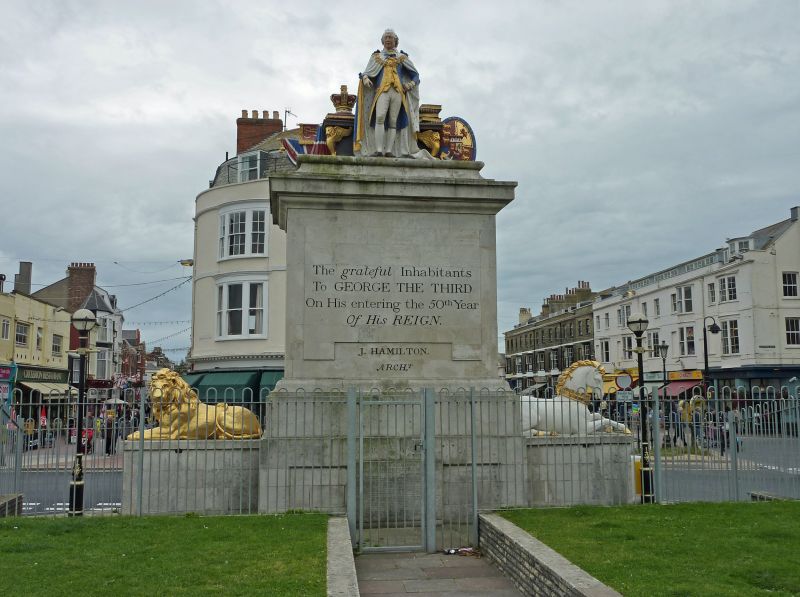 Freestanding monument to George III. Erected 1809/10, to
designs of James Hamilton, architect. The figures and detail
in Coade stone, said to be the work of Mr Sealy, of the firm
of Coade and Sealy, on a massive Portland stone pedestal.
The King, in Garter robes, holds the sceptre in his right
hand, and is backed by various insignia, including, to his
right, the crown on a cushion, Royal standard and Union flag;
to his left are a pile of books and a large oval shield of
arms. These items are all brightly coloured, and stand on a
cavetto base with roll-mould, on a lofty rectangular pedestal
with moulded capping and base, on a plinth in 2 high steps. To
each side is a further low pedestal, not coursed or bonded to
the main stonework, carrying fine gilded figures; to the
King's right a lion, and to his left a unicorn.
The front, which faces N along the length of the Esplanade,
has an inscription in large letters: 'The grateful
Inhabitants/ To GEORGE THE THIRD/ On his entering the 50th
Year/ Of His REIGN'; immediately below, in lettering almost as
bold is 'J.HAMILTON ARCHT'.
The back of the pedestal, in a corresponding location, bears a
long inscription, considerably worn, and legible only in part.
This inscription has been transcribed to a smaller Portland
stone tablet set at the base, at the front. Amongst other
information is the date (18 October 1809) of a general
meeting, with James Bower, Mayor, in the chair, at which
various resolutions were passed, including 'A congratulatory
address...' and 'That Public Dinners and general illuminations
are ill adapted to this occasion or the awful times in which
we live....' Instead, a public subscription would be raised,
partly '....to contribute to the comfort of our Poorer
Brethren .....and Prisoners of War....' half of the proceeds
to each of these worthy causes. In addition 'That (sundry
named persons) being possessed of a statue of our excellent
king... offered to present it..' A separate subscription would
be raised for this, and the committee given full powers to
find a site and erect it. The lettering is all splendidly set
out and incised, and, like the principal inscription, is
painted black.
This splendid memorial has a commanding location, but now
serves as part of a traffic island. The monument has not

always been appreciated: in a long report of January 1886 in
The Southern Times, reviewing the unveiling of the statue to
Sir Henry Edwardes (qv), further to the S on the Esplanade,
the journalist contrasted the new statue with '.... that
hideous monstrosity known as the King's Statue, about the
removal of which many schemes have been from time to time
suggested....'
(RCHME: Dorset, South-East: London: 1970-: 338; Buildings of
England: Newman J & Pevsner N: Dorset: London: 1972-: 453).