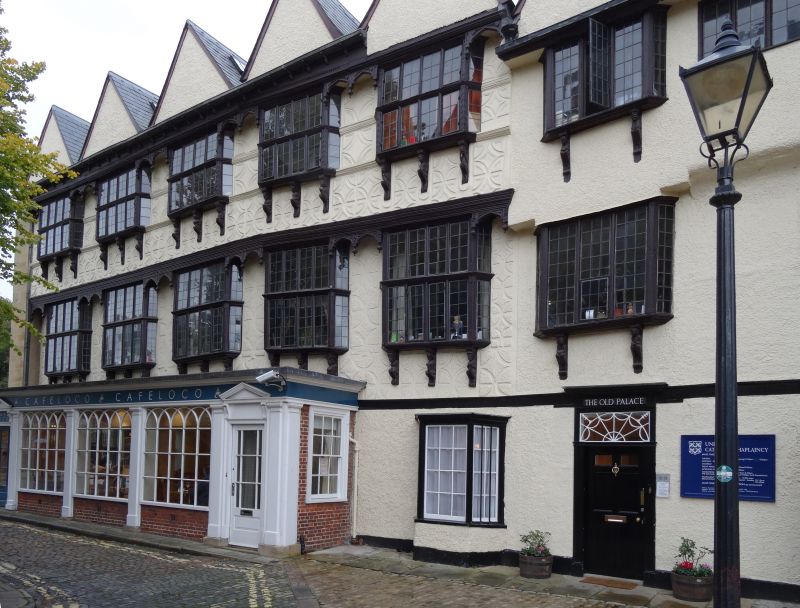 ST ALDATE'S STREET
1.
1485
(West Side)
Nos 86 & 87
(The Old Palace,
Bishop King's Palace)
(Formerly listed under
Rose Place)
SP 5105 NW 12/458 12.1.54.
I GV
2.
RCHM 154. Built in two sections:-
(1) the main range built Circa 1622-8 by Thomas Smith and probably incorporating
the core of an earlier structure and (2) the West range being an earlier
house of C16-C17. 3-storeyed timber-framed except for the East elevation
and the 2 lower storeys of the South wall, which are of stone. The roofs
are of Welsh slate. The long axis lies East and West at right angles to
the street with its North elevation facing on to Rose Place and the South
on to Clark's Row. The North elevation shews a main range of 5 gables and
to the West of these 2 smaller and lower gables of the C16-C17 building which
has an oversailing on the upper floors. On the ground floor is a modern
addition towards the East and to the West the 1622 timber-framed front has
a doorway with rectangular fanlight, a 3-light window and a side doorway.
In the 1st and 2nd floors are 5 bay windows but the 2 1st floor ones were
destroyed when the C19 addition was made towards the East. Each oriel window
has 4 front mullioned, transomed and moulded wood-framed lights and one on
each return; each is supported by 3 brackets carved with grotesques; the
centre window in the 1st floor has the date 1628 on a shield above the heads
of each of the 3 grotesques. The moulded fascias above the 1st floor windows
have carved arches rising from pendants between, and at each end of, each
oriel. The face of the 1st and 2nd storeys has a pargetted decoration.
The West (or C16-Cl7) range has an overhang at the 2nd floor and 2 gables;
in the 1st floor is a plainer 3-light oriel supported by 2 moulded brackets
and in the 2nd floor is a similar oriel with a plain 3-light casement window
in the West gable. The East elevation has an embattled parapet with a curved
gable in the centre. In the 2nd floor are 3 C17 single-light stone mullioned
windows. It is probable that this East wall is of a date earlier than the
1628 North front. The present projecting shop on the North East angle seems
(from early drawings) to have been here since 1837-9. The South elevation
has been somewhat altered and some of the windows have been converted to
sashes. The top storey of the East part has some modern additions; the centre
part has an attic storey added, while to the West the wing has a single gable.
Interior. RCHM p 175 b and Antiq Jnl 27 (1947) p 135. Includes contemporary
panelling, plaster ceilings and staircases, For plans, elevations and section
see Fig 10 p 134 of Antiq Jnl 27 (1947).