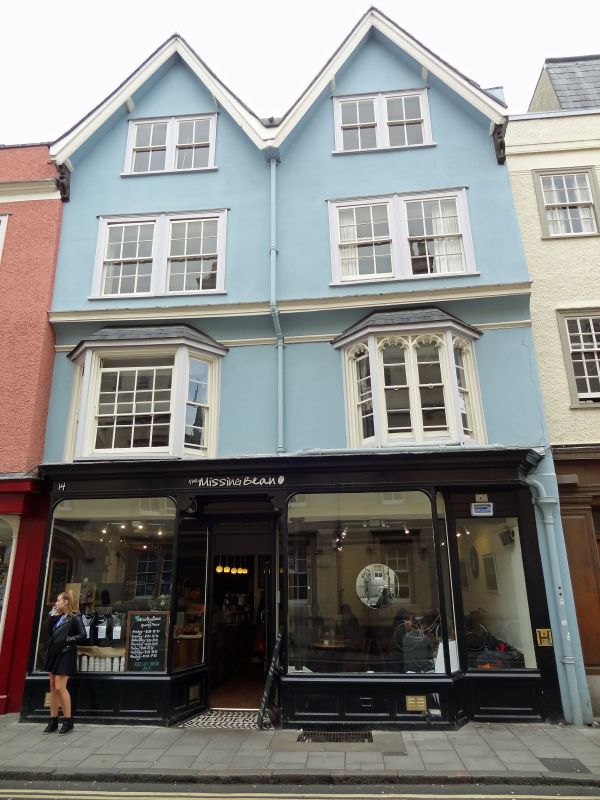 TURL STREET
1.
1485
(West Side)
No 14
SP 5106 SW 8/316A 12.1.54.
II GV
2.
House and shop. RCHM 101. Originally a C17 house, altered in C18 and restored
in C19. 3-storeyed stuccoed timber-framed with a coved overhang at the 2nd
floor with a moulded cornice above it, and 2 gables; the roof is of Welsh
slate. The ground floor has a modern shop front. In the 1st floor, on the
South, is a modern 3-sided bay with sashes; on the North is a modern 3-sided
bay with double sashes in the centre; these lights as well as those in the
returns, have gothic-traceried heads. The 2nd floor has 2 double sash windows
in moulded wood frames. The gables have what appear to be 2 original moulded
bargeboards and at each side is a carved grotesque bracket; in the gables
are double sash windows in moulded wood frames. Down the centre of the
front is a C18 lead rainwater pipe with a moulded head. The back is stuccoed.
C18 panelling and staircase. Exterior. Its state in 1824 (altered now chiefly
by insertion of shop front) is shown in a Buckler drawing. Rear reconstructed
1967-8.