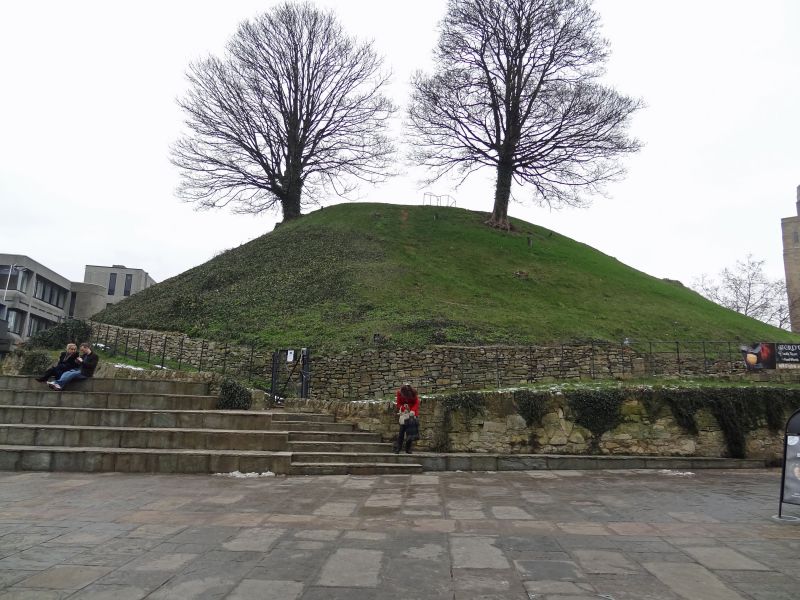 HM PRISON OXFORD NEW ROAD
SF 5006 SE
7/10014 Well House Oxford Castle
GV
I
Motte to former castle with Well Chamber. Mound, c1071 as the motte
of Oxford Castle built for Robert d'Oilly to provide a means for the
Normans to control the town and the Upper Thames Valley. Earth.
Circular plan. Approximately 80 feet high, base diameter about 250
feet, top diameter about 60 feet. Originally there would have been a
wooden keep. Constructed by forced Saxon labour. The Well Chamber.
Early C13. Rubble stone. Entrance with 3 stones bearing shield-of-
arms thought to be of Fox, Bishop of Winchester, the see of Durham and
Newcastle, Bishop of Exeter. A flight of steps leads down about 20
feet into a hexagonal plan chamber with stone vaulted roof supported
on chamfered ribs. Oxford Castle was slighted in 1652. In 1776 New
Road was built across the northern part of the Bailey and in 1785 the
County Justices acquired the site to build a new Oxford Prison which
incorporated the only other surviving elements of the castle viz. St.
George's Tower (qv), St. George's Chapel Crypt (qv) and the batter
from the Round Tower (qv). The castle saw little action apart from
during the Anarchy in 1142 when King Stephen besieged the Empress
Matilda and it was attacked in the Baron's War of 1215. There had
been prison buildings within the bailey since the C12.