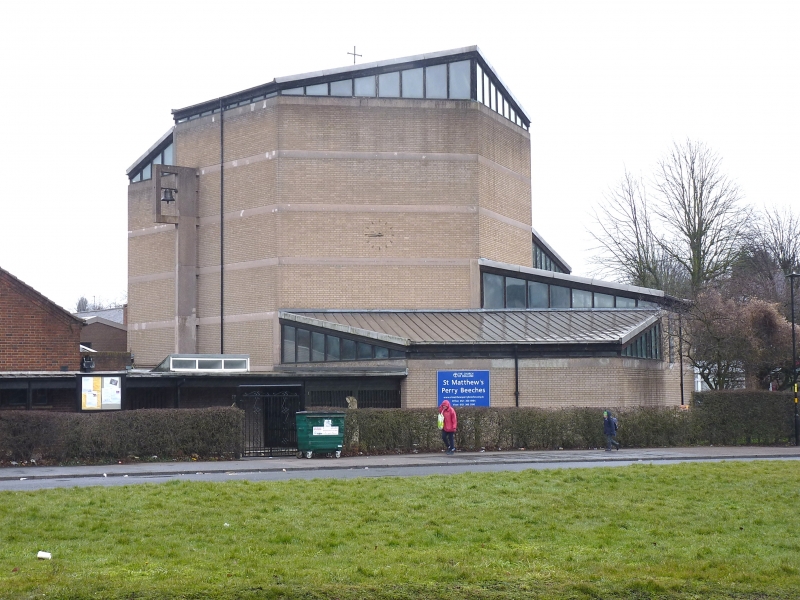 Church. 1962-64. Maguire and Murray. Buff brick; reinforced concrete; low pitched copper roof. Irregular hexagon in plan, with the altar set just off centre along one side. Sanctuary raised and altar itself raised by a further step. Font is located to the south of the altar. Tall church which rises up in a series of turned hexagons, narrowing towards the top, each layer with a low monopitched roof and sloping clerestory, and each layer defined by a horizontal concrete band. Glazing renewed, like-for-like, in timber frames, (now black stained). Concrete bell tower rises to west side. Clock inset on south side (not original but in keeping, the fingers being set directly on the brickwork). Covered way and glazed porch on south side and vestries to north.
Internally buff brick and concrete are again exposed and the rising hexagons supported and dramatised by huge beams which define the space at the different levels. Boarded roof with exposed timber beams. The original double cube altar has been replaced, but the original `de Stijl-like' pulpit, lectern, priest's chair and desk survive, the former two raised on a brick plinth; these are open, frame-like structures in light timber. The font is a large brick cylinder containing an industrial ceramic vat, with a polished brass lid. The handsome brown terracotta floor paviors (which cover the whole floor inside the church) form a circular pattern around it. The original light fittings by Murray survive; they comprise rows of delicate lights with arched reflectors, hung at low level and linked by fine metal rods; they are hung so as to emphasise the idea of overlapping hexagons which informs the whole design. Above the font is a cross shaped timber fixture with eight lights, also original. The light-coloured timber benches, of `chunky' design, are original.
Architecturally powerful in its design, this church is a fine example of the influence of the Liturgical Movement in this country.