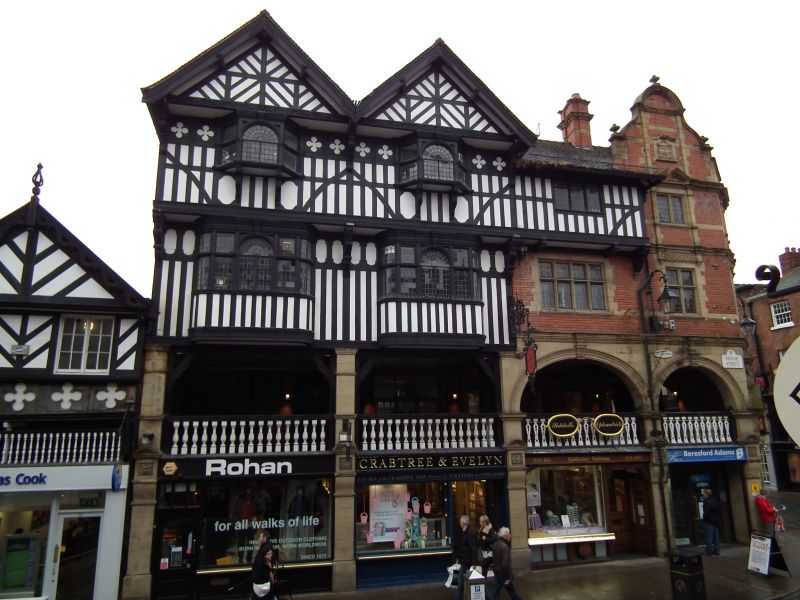 Includes: Nos.1 & 3 Street and Nos.1 & 3 Row WATERGATE STREET
AND ROW.
6 town houses with shops, now offices. 1892. By TM Lockwood.
For 1st Duke of Westminster. Yellow sandstone and red Ruabon
brick with blue diapering flanked by timber framing with
plaster panels; brown clay tile roofs.
EXTERIOR: 4 storeys including street level and Row; 4 bays to
Bridge Street, 3 to Watergate Street; canted corner to street
junction, with stone steps to Row. 2 bays to each street next
to corner are ashlar to lower 2 storeys and stone-dressed
brick above. Arcade to Row has one round and one elliptical
arch to Bridge Street and 2 elliptical arches to Watergate
Street; Renaissance architraves, moulded bands, pediments and
cartouches; one shaped gable to each street. Outer bay to
Watergate Street, top storey of third bay and upper 2 storeys
of fourth bay to Bridge Street have close studding of oak,
jetties to each storey and herringbone struts to gables;
richly carved frieze, console brackets and grotesque heads.
Oak-framed hip-roofed porch at Row level before No.3 Watergate
Street shelters S-shaped stair to street. Row to Nos 2 & 4
Bridge Street has splat balusters, all other bays have wooden
turned vase balusters, painted. Modern shopfronts to both
streets and to No.2 Row. 5 Row casements, partly leaded, and 4
part-glazed panelled doors in panelled cases. Upper-storey in
brick walls have moulded stone surrounds, mullions and
transoms; oriel windows on oak-framed walls, some with
round-arched middle lights; all windows leaded. Cast-iron
rainwater-heads, pipes and brackets. A wrought-iron sign
bracket to each street, that to Watergate Street having bronze

eagle's head. Rears not visible.
INTERIORS much altered. Open-well stair in No.6 Bridge Street;
some good fireplaces; 6-panel doors; cornices.
The most satisfying of TM Lockwood's many buildings in
Chester.