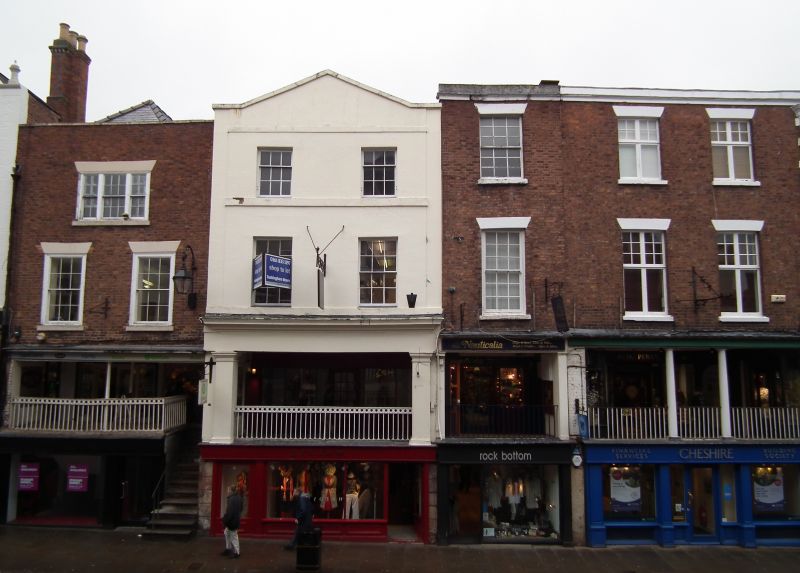 Formerly known as: No.19 BRIDGE STREET.
Undercroft and town house with later rear wing, possibly a
former separate dwelling; now an undercroft shop, 2 Row shops;
one shop and the third and fourth storeys vacant 1990-1991.
Early to mid C14, C18 and altered C20. Sandstone, brick; grey
slate roof at right angle to street, hipped to front.
EXTERIOR: 4 storeys including undercroft and Row; one bay
extended a little south between C14 and C18. A poor late C20
shopfront to the street; south pier and 11 steps to Row, of
sandstone; the north pier is covered; Cast-iron railing to Row
front and return to steps has circlets between paired upper
rail; a slender moulded central cast-iron column with a second
column behind; the stone south pier is rendered; the north
pier is brick; the stallboard 1.70m front to back was formerly
sloped and boarded, now level and tiled; flagged Row walk;
modern shopfronts; plastered ceiling; the boxed Row-front
bressumer has a modillion cornice. The upper storeys of
Flemish bond brown brick have flush sashes with painted stone
sills and wedge lintels, 2 of 12 panes to the third storey and
one, tripartite of 8;12;8 panes, to the fourth storey; parapet
with plain stone cap; a lateral chimney set back, north.
INTERIOR: the undercroft floor may have been lowered; the
walls are wholly lined. There are 2 early to mid C14
double-chamfered bluntly-pointed cross arches of sandstone
carrying probably medieval flat oak joists.
The front part of the Row storey is lined; the front part of
the third and fourth storeys could not be inspected, but some
mouldings are reported. The passage to the rear wing has a
stone and brick stair, north, to a small cellar barrel-vaulted
probably C18 in brick. The semi-elliptical oak stair to the
third storey has plinthed stick balusters and a swept rail; a
tripartite stair sash of 4;12;4 panes. The third storey has
softwood boarded floors, 2 panelled basket archways across the
passage, doors of 5 fielded panels, a classical fireplace,
probably of good quality but painted, with a cartouche and
swags on the mantel frieze in the room behind the stair; a
corner fireplace in the rear room.