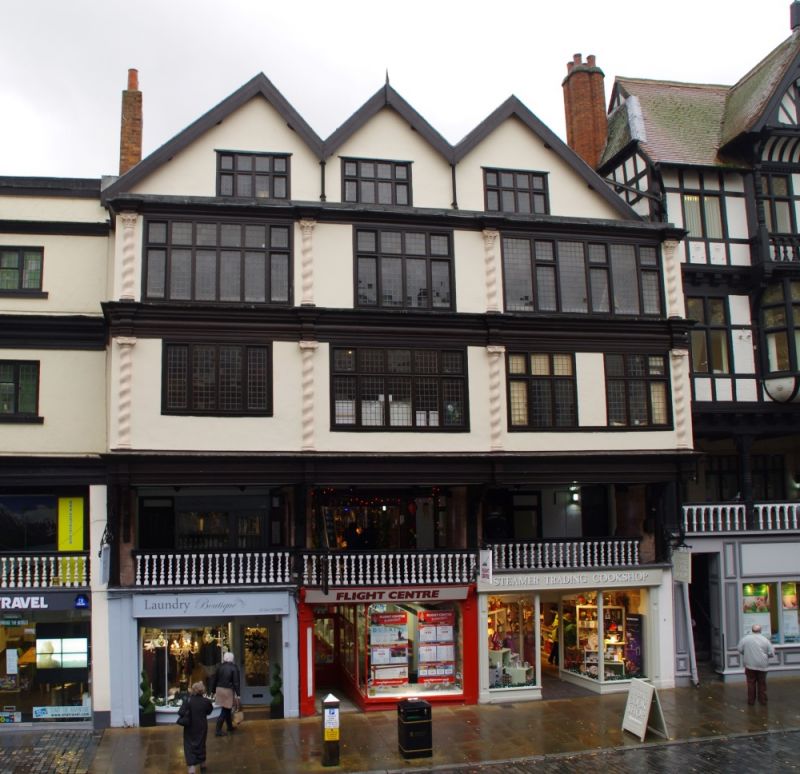 3 shops at street level, mutually overlapping at Row level and
above. 3 bays, probably formerly forming either a 3-bay
undercroft and town house or 2 or 3 undercroft-and-town-house
tenures. Sandstone piers probably of medieval origin; late C17
timber framing; late C17 or C18 brickwork; rendering; grey
slate roof; heavy restoration 1973-1975 destroyed elements of
the old building and inserted concrete and steel framing.
EXTERIOR: 4 storeys, including former undercroft and Row
levels, plus attic storey.
Nos 22 & 26 Street have modern shopfronts; No.24 has recessed
door with a large pane above a pair of panels; painted frame
of shopfront, probably cast-iron, has slim colonnettes with
foliar capitals, and mouldings in the quadrant upper corners
to panes. The Row front has substantial painted wood
barleysugar balusters and rails, those to No.20 inserted 1973
in place of C19 cast-iron railing; rectangular stop-chamfered
sandstone pier at each end and between Nos 20 & 22 and a
thinner octagonal pillar between Nos 22 & 24; sockets, now
filled, for a former rail at rear of the sloping stallboard;
the Row walk paving is covered; replaced beams and plaster
ceiling over stallboard and Row walk; modern shopfronts. The
frontage of the third, fourth and attic storeys is renewed,
with numerous alterations; renewed oak fascia above Row front,
on brackets; 4 painted wooden barleysugar pilasters with
quasi-Ionic capitals, renewed at least in part, to each of the
third and fourth storeys; all the windows are renewed,
incorrect in detail, replacing former sashes in Nos 20 & 22;
the third storey has 2 mullioned and transomed 3-light leaded
casements with top-hung top-lights to No.20, a similar 5-light
casement to No.22 and a 4-light casement to the front of
No.24, plus a transomed 1-light casement in the south return;
a replaced oak architrave, frieze and cornice at fourth storey
floor level; the fourth storey has a mullioned 6-light leaded
casement to No.20 with alternating top-hung top-lights, a
4-light mullioned and transomed leaded casement to No.22, one

of 6 lights to No.24 and a 1-light transomed casement in the
south return; a replaced oak cornice and lead apron roof in
front of the attic storey which has 3 mullioned and transomed
leaded casements with top-hung top-lights; plain bargeboards
to the 3 front gables.
The rear has 2 gables, to the north bay (No.20 Row) and to the
combined middle and south bays (Nos 22 & 24 Row). This
arrangement and the octagonal pillar near the front of the
junction line suggest that Nos 22 & 24 had been a single
tenement, possibly from the Middle Ages. What can be seen of
No.20 looks late C17, but rendered and with C19 window. Nos 22
& 24 are C18, in Flemish bond; projecting bands; 9-pane,
12-pane and 16-pane sashes.
INTERIOR: most features at street and Row levels are covered,
except some C17 ceiling joists visible in No.24 Street, a C19
stair and some C17 timbers in No.22 Row and C17 joists in
No.24 Row. Features in the upper storeys, disconnected, are
largely of individual interest. The third storey has a mid C17
fireplace in north wall of front parlour and a chamfered stone
pier in the north and south wall; some probably C18 or C19
brickwork; the parlour extending across the fronts of Nos 22 &
24 shows the south side of the south pier in No.20 and a
chamfered pier in the south wall of No.24; the column between
Nos 22 & 24, immediately above the similar column in the Row,
suggests that the chamber always encompassed 2 bays; the
ceiling above the bay of No.24 has a good 3-panel moulded
plaster ceiling, c1700, which was removed, restored and
re-installed in 1975; a late C17 fireplace in the south wall,
and in the south wall of the rear room of No.24, which also
has C17 oak beams. The fourth storey has sandstone piers and
octagonal column, as in the third storey; a C17 sandstone
fireplace in the south wall of No.24. An altered oak newel
stair with 2 barleysugar balusters per step rises from the
third storey to the attic. The attic storey, largely clad,
shows a late C17 roof truss at rear of front room of No.20 and
at rear of Nos 22 & 24; oak purlins.
The restoration of 1973-5 is of some interest as an example of
methods then used on a severely dilapidated building, in
marked contrast to the more conservative approach which would
now be adopted.
(Chester Rows Research Project: Harris R: Archive, Bridge
Street West: 1989-; Engravings of street frontages in Chester:
Batenham: Bridge Street West (part): 1816-).