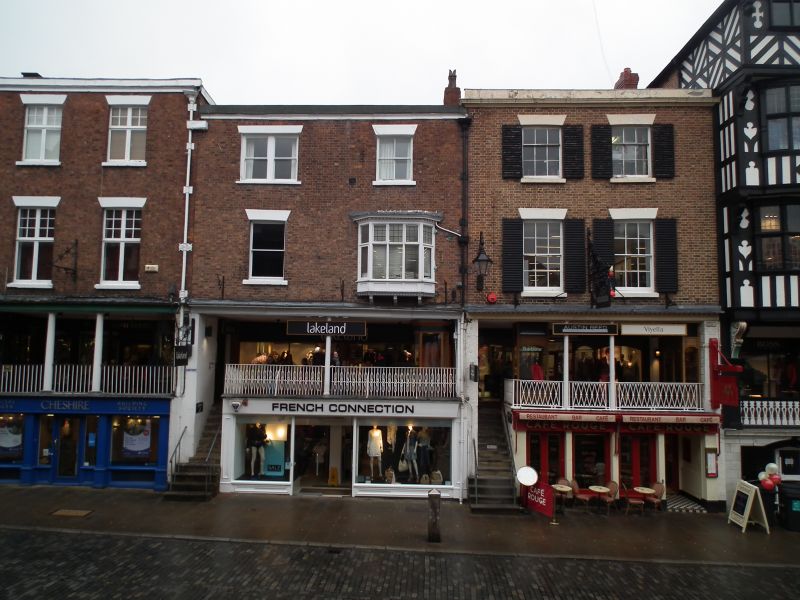 Undercroft and town house, now undercroft office, Row shop and
upper storeys partly in office use. Probably early-mid C14;
1804; altered C20. Flemish bond brown brick, grey slate roof
with ridge at right-angle to street, hipped to front.
EXTERIOR: 4 storeys, one bay. Modern office front to street;
brick north pier; brick pier probably of sandstone, rendered;
a fascia covers the bressumer. The cast-iron Row-front rail
has bottom rail, stick balusters and plain top-rail; brick
north pier, rendered south pier; 2 cast-iron Roman Doric
intermediate columns; slightly sloped boarded stallboard 1.68m
from front to back; modern tiled surface to Row walk; modern
shopfront; covered door to rear passage, south; plaster
ceiling; wood fascia hides Row-top bressumer. The brick upper
storeys have painted stone sills and wedge lintels; 2 cross
casements to the third storey have a large pane to each lower
light and 6 panes to each upper light; 2 similar but shorter
fourth storey cross-casements have 4 panes in each upper
light; painted cornice and low stone parapet.
INTERIOR: the undercroft 3 steps down from the street has a
cased beam under back of stallboard, then 4 cross-beams each
on end-posts and 2 inserted intermediate posts cased in wood.
Flat oak joists have chamfers with stops visible at rear ends;
one joist in the second bay has both ends stopped; 2 in the
third bay have both ends of chamfers more simply stopped; a
suspended ceiling covers the joists in the fourth bay. The
sidewalls now covered, are stated to be sandstone, probably
medieval. The Row shop has all surfaces covered. A Row door,
now covered, with substantial architrave in the rear passage
leads to the third and fourth storeys; as is common east of
Bridge Street; the upper storeys suggest either a former
courtyard house or a formerly separate rear dwelling. A late
C19 stair leads to the third storey, with a partly covered
sash with radial bars in the round arch at its head. A 6-panel
door leads to the front room, now partitioned, which has a
substantial skirting, a sub-panel to each window, a painted
C19 fireplace, north, and a plaster cornice; a lateral stair
behind the front room leading to the fourth storey has an open

string, simple shaped brackets, a slender turned newel,
covered treads, 2 stick balusters per step and a swept rail;
the next third storey room from the landing, through a basket
archway with pilasters, has a light-well above, and may have
been inserted; the third room has a concave corner chimney
breast, a cornice north and east and a ceiling rose; the
mildly Gothick fourth room has 2 sharply arched niches, a
broader 4-centred arched recess, a patterned cornice and a
recessed 12-pane sash.
The fourth storey front room has a blocked fireplace, north,
and a sub-panel to each window; the passage has a basket
archway with roll-moulded arrises to pilasters; the middle
room has a 6-panel door; the north back room has a blocked
corner fireplace and a sub-panel to the recessed 12-pane sash;
a 6-panel door to the south back room which has a simple
corner fireplace and a sub-panel to the recessed 12-pane sash.
The back passage and the rear, externally, have no visible
features of special interest.
The principle area of interest is the undercroft; it is
probable that there is more medieval structure than is now
visible.
(Chester Rows Research Project: Harris R: Archive, Bridge
Street East: 1989-).