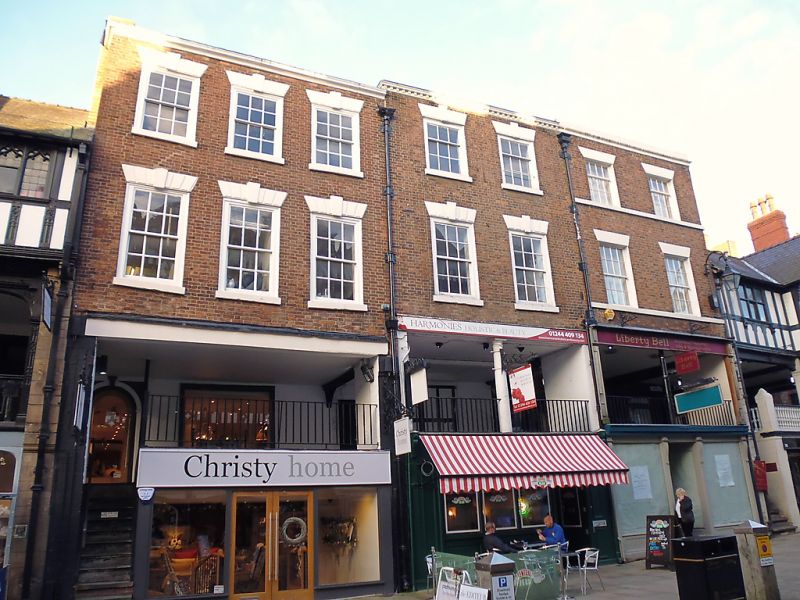 Undercroft and town house, now shop, storage and workshop.
C14, late C16 and c1760. Sandstone, timber framing, brown
brick in Flemish bond and grey slate roof at right angle to
street, hipped to front.
EXTERIOR: 4 storey including undercroft and Row levels.
Shopfront to street has no visible features of interest;
flight of 10 repaired steps to Row. End pier of brick to north
and painted stone to south; plain C20 mild steel balustrade;
stallboard 2.08m from front to back and Row walk have surfaces
covered; rendered rear wall to Row has probably C16 studded
5-board door on wrought-iron long hinges under C18 blocked
fanlight with architrave, cornice and key of timber;
architrave to replaced window; plastered ceiling to stallboard
and Row walk; plain bressumer. The third and fourth storeys
each have 3 flush 12-pane sashes with painted stone sills,
rusticated wedge lintels and keystones; coved cornice,
returned at south end; lead rainwater pipe and head, north;
chimney and part of south wall rebuilt in Ruabon brick.
The third storey to the rear has a flush 9-pane sash, the
fourth storey a casement of two 6-pane lights; flush verge to
gable.
INTERIOR: the undercroft is early to mid C14; the present
floor, 3 steps below pavement level, is inserted with the
lower part of the undercroft beneath; walls of squared
sandstone rubble with some C17 and C20 brickwork; from the
front there are 3 oak beams parallel with the street and 2
altered or renewed beams, then a double-chamfered full-width
2-centre sandstone arch, a beam of large scantling, a second
sandstone arch detailed as the first arch, a chamfered beam on
stone corbels, a small C18 brick barrel-vault and sandstone
rear walls. 2 bays of the ceiling have broad oak joists, the
other bays where visible largely narrower joists. Beyond the
rear arch the joists support visible rubble infill - cf No.12
Watergate Street (qv) and Nos 28-34 Watergate Street (Booth
Mansion) (qv); a rear doorway is now concealed by a safe; in
the cellar a beam is dated 1593, but was probably repositioned
there from an upper storey when the house was refronted C18.

The Row storey is stripped of fittings and partitions but
retains bay posts, cross-beams and north wall framing c1600;
some quarry-tiling is visible. The stair is altered but an
upper flight has an open string with brackets and 3
column-on-vase balusters per step. Much of the c1600 timber
frame is visible in the third storey. The fourth storey is
lined and partitioned but the form of the roof and the
position of partitions suggests that the timber framing may
largely be intact.
(Chester Rows Research Project: Harris R: Archive, Bridge
Street West: 1989-).