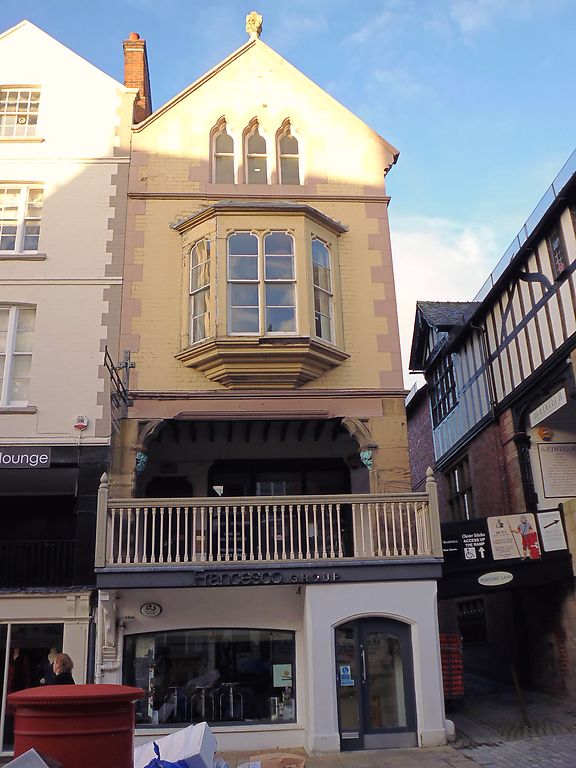 Vintner's shop and offices, now office unoccupied.
Substantially rebuilt 1858. By James Harrison for Welsby's.
Stone-dressed brick, painted, and brown brick with tiled roof
at right-angle to Bridge Street.
EXTERIOR: 4 storeys including undercroft and Row levels; loose
Gothic Revival. The office front to the street is rendered,
with door and window altered; a projecting porch, north, and a
shaped timber bracket, south, support a projecting balcony in
front of the Row walk; renewed wooden balusters and rail;
unpainted yellow sandstone end-piers with stopped ovolo
chamfers and cusped brackets on foliar corbels support a
bressumer with stopped reeded chamfer; altered steps and
concrete footbridge across Pierpoint Lane, 1970s; sandstone
riser and flag pavement to balcony; concreted Row walk;
painted stone rear wall has shopfront in a shoulder-arched
opening with, each shouldered, a central shortened mid C19
part-glazed 3-panel door with 1-pane overlight and a 1-pane
window of vertical proportion to each side; south of the
shopfront a shoulder-arched passage entry has a door with
central reed and 4 panels, the lower pair raised and the upper
pair with cusped heads beneath a plain overlight; archway over
north end of Row walk has moulded chamfers to stone lintel on
shaped brackets; narrow stop-chamfered joists to plastered
ceiling. The upper storeys of stone-dressed brick have flush
quoins; the third storey has a stone-corbelled 4-light canted
oriel with 4-pane sashes in shoulder-arched lights and a
hipped lead roof; the fourth storey has a moulded band beneath
the flush sill of a triple sash of 2; 2; 2 panes with arched
heads; the stone-dressed front gable has a shaped kneeler,
moulded coping and foliar-headed octagonal finial.
The north face to Pierpoint Lane, of brown brick in irregular
bond is evidently older than the Bridge Street front and
visible internal features; the third storey has 2 dual sashes
of 8; 8 panes with painted stone sills and cambered brick
heads.
The rear has a probably inserted full-width segmental brick
arch infilled C20 with weatherboarded face; evidence of a

2-storey gabled rear wing, now demolished; a dual sash and a
single sash, each small and of 2 panes, to the third storey
and a dual sash of 8; 8 panes to the fourth storey; the shaped
kneeler and coping to the rear gable were probably added 1858.
INTERIOR: the undercroft, 3 steps down, is covered in modern
linings. The Row storey has cornices, probably 1858; the third
and fourth storeys could not be inspected.
HISTORICAL NOTE: The Builder v.16 p.269, April 17 1858
reported on this site: "In excavating for new buildings
opposite the Feathers Inn, several bases of Roman character
have been discovered at a depth of 4 feet below the surface.
They are in their original positions, forming a colonnade,
placed four yards apart, resting on large blocks of stone 12
inches thick. The new building will be of brick, with white
stone dressings, in the medieval style of fourteenth century,
presenting a gable to the street, and having a projecting
bow-window to the room over the Row. A shop in Bridge Street
Row is also to have timber work characteristic of Chester in
the fourteenth century. Mr. Harrison is architect to both
buildings."
(Chester Rows Research Project: Harris R: Archive, Bridge
Street West: 1989-; The Buildings of England: Pevsner N and
Hubbard E: Cheshire: Harmondsworth: 1971-: 167; The Builder:
1858-: 269).