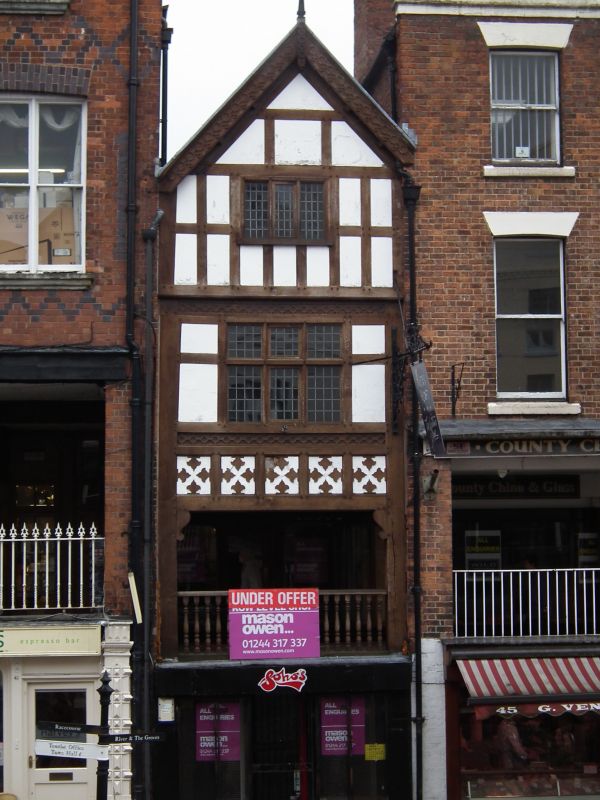 Undercroft and town house, then undercroft shop and parsonage,
now undercroft shop and Row shop. Rebuilt probably mid C17,
bequeathed 1659 by Lettice Whitley to St Michael's Parish,
altered early C18, sold 1907 to Crawford, antique dealer, and
altered internally by him; restored late C20. Timber frame
with plaster panels; grey slate roof, ridge at right-angle to
street.
EXTERIOR: 4 storeys including undercroft and Row; one narrow
bay. A modern shopfront to the street covers the undercroft
structure. Continuous oak corner-posts through Row and third
storeys; oak Row-front rail on turned balusters; level boarded
stallboard 2.02m from front to back; flagged Row walk; the
shopfront in early C20 manner has recessed central entrance
and windows with slender moulded sides and rounded top corners
with carved spandrels; consoles on corner-posts carry an ovolo
bressumer, with a parallel chamfered cross-beam behind;
exposed joists; an altered rear beam. The small-framed third
storey has a row of 5 ornamented panels, a rail with strapwork
pattern, a 3-light mullioned and transomed leaded casement
with 2 superimposed panels to each side and a patterned rail.
The mildly jettied fourth storey has a row of 6 small panels,
a small leaded 3-light casement with a pair of panels to each
side, a simple queen post gable, patterned bargeboards and a
sloped finial. A lateral chimney set back, south.
INTERIOR: the undercroft is lined; 5 roughly chamfered squared
beams towards the rear partly visible, C17 or earlier.
In the Row and upper storeys C17 features include the front
wall, the former rear wall now forming an internal cross-wall,
a fine but incomplete moulded plaster ceiling and the form of
the galleried hall open to the roof. The principal C18 feature
is the stair to the third storey which rises into the largely
C20 rear extension which probably replaces a Georgian wing.
Reordering of the interior, difficult to identify completely,
was undertaken by Crawford shortly after 1907.
The Row storey is largely lined, but has part of a C17 plaster
ceiling and the early C18 oak newel stair of one flight to the
third storey, with closed string, 2 barleysugar balusters per

step and heavy moulded rail. The former rear wall to the third
storey bridges the front of the stair-well. It has a 6-light
mullioned and transomed leaded casement, perhaps curtailed to
accommodate the doorway to the hall, south. Beneath the
casement three C19 carved panels in the manner of late Middle
Ages depict stations of the Cross, probably brought in and
inserted by Crawford shortly after 1907; they may be plaster
casts. The hall is open to the roof, and its lower part
probably elongated by the removal of a former chamber over the
Row; an altered early C18 oak newel stair with barleysugar
balusters leads to the north gallery; the balustrade of the
east cross-landing carries 3 further stations of the Cross
panels; the gallery leads to a small fourth storey front
chamber; a small early C20 east office has a leaded oriel. The
roof structure has 3 queen-post trusses, an inserted king-post
truss, east, and purlins; at fourth storey level the former
rear wall, still the rear at this level, has a large tie-beam
and a 3-light leaded casement with an inserted
horizontally-sliding central sash.