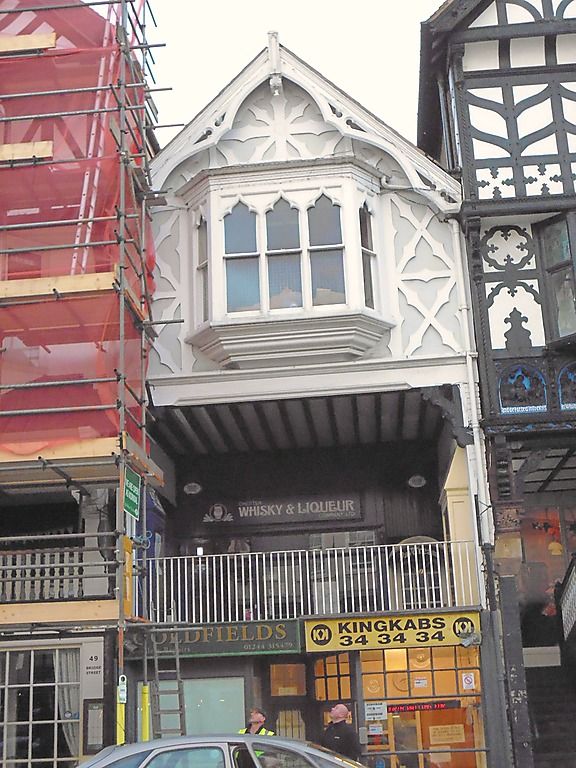 Undercroft and town house, now 2 small offices in undercroft
and a shop at Row level and above with a separate shop,
probably formerly a cottage, behind; on a medieval burgage
plot. The earliest visible features of the existing buildings
are C16 and C17, refaced to Bridge Street and partly rebuilt
1858 by James Harrison and altered C20. The mock timber
framing of the front is to Vernacular Revival as Gothick is to
Gothic Revival, the clearest instance of its kind in Chester.
Grey slate roof, gable to front.
EXTERIOR: the undercroft has a recessed central porch,
triangular in plan, with an angled door to each half-width
office; the north office has an end-pilaster and altered door,
probably 1858; the south office has a modern front. The Row
front has partly-rendered brick end-piers and simple
mild-steel stick balusters and rail; sloping boarded
stallboard 2.1m from front to back; flagged Row walk; C20 oak
and glass shopfront; south passage to rear has replaced
part-glazed door; cusped timber brackets on stone corbels
carry a Row-front bressumer with chamfer moulded and stopped
as on No.40 Row (qv).
The third storey has a central 5-light canted oriel on a
rendered corbel similarly detailed to that on No.40 Bridge
Street & Row (qv); the lights have 2-pane sashes with cusped
arches to heads; hipped oriel roof of slate. The timber
framing is planted, with the edges of every component cusped;
the centre rail to each side of the oriel has a saltire-braced
panel beneath and above; the gable above the oriel has framing
like an 8-spoked wheel with 2 mouchettes to each side; ornate
shaped bargeboards, each cusped and pierced with 2 pairs of
mouchettes; a damaged drop finial. External features of the
former rear cottage are not visible.
INTERIOR: the partial rebuilding in 1858 and C20 linings may
conceal structural elements of C17 or earlier. The short
undercroft, now divided into 2 offices, is wholly lined. At
Row level timber posts in each sidewall of the southern
passage, some in the north sidewall covered, show that, at

least since C17, the great hall had a side gallery; surfaces
at Row level within the shop are covered. At third storey
level the vertical surfaces and the balustrade of the south
gallery are probably 1858, with some alterations; the front
chamber above the Row has an antiquarian collection of oak
timbers, probably from elsewhere in the building, fixed as if
timber framing, on the south wall; the floor of the chamber
also forming the ceiling to the Row was probably raised in
1858; the truss above a plastered partition between chamber
and hall is largely covered; over the hall the first tie-beam,
now plastered, and the rear truss has an exposed cambered
tie-beam and principal rafters morticed for angle braces,
since removed, and a windbrace to the north purlin. Surfaces
of the former rear cottage are almost wholly covered, but some
visible beams and joists of oak suggest a pre-C18 origin.
HISTORICAL NOTE: this building tallies with the reference to
James Harrison's buildings in Bridge Street quoted from The
Builder v.16 p.269, April 17 1858 "A shop in Bridge Street Row
is also to have timber work characteristic of Chester in the
fourteenth century. Mr Harrison is architect of both
buildings." For the other building see No.40 Street and 40 Row
(qv).
(Chester Rows Research Project: Harrison R: Archive, Bridge
Street East: 1989-; The Builder: London: 1858-: 269).