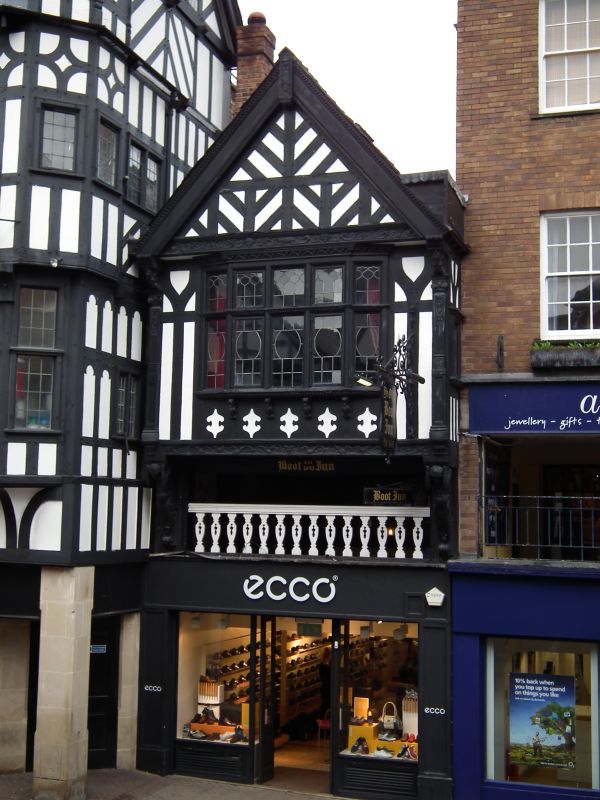 Undercroft and town house, now shop at undercroft level and
public house at Row level. Altered medieval undercroft, with
mid C17 upper storeys. Sandstone, timber frame with plaster
panels; grey slate roof.
EXTERIOR: 3 storeys of one bay including street and Row
levels. The timber frame of Row and third storeys is heavily
restored. The Row has heavy moulded rail on shaped splat
balusters, probably replaced late C19; sloped boarded
stallboard 2.55m from front to back; stone-paved Row walk;
heavily-repaired bressumer over Row front and beam between
stallboard and walk; repaired chamfered posts; repaired
chamfered joists; heavily restored front to Row of public
house. Wrought-iron inn-sign bracket. The bressumer front is
carved, supported on oak Atlantes probably renewed late C19.
The restored face to the third storey has a shallow canted
5-light mullioned and transomed oriel on 4 animal-shaped
brackets above 5 ornate panels; 2 close-studded panels to each
side have rail at transom level. V-braced above; a
reversed-taper pilaster at each corner carries the jettied
gable on figure brackets; the tie-beam face is carved;
panelled herringbone strutting; moulded bargeboards; truncated
drop-finial. The front 2 feet of the east side are exposed,
with a V-braced panel above a small leaded window; a
protrusion above eaves level. The lower part of the east party
wall of the rear yard is of medieval stonework.
INTERIOR: the cellar, wholly beneath street level, is cut into
the bedrock with brick upper parts to its walls; the floor of
stone flags is largely screeded; 2 oak cross-beams to a
largely renewed ceiling are visible. The street-level shop is
largely lined, but with medieval coursed sandstone visible
beneath the barrel-vault of the rear bay; the barrel-vault, of
generally C18 form, is partly of sandstone and could be
earlier. The partition between shop and stockroom is inserted;
the walls of the barrel-vaulted stockroom are medieval coursed
sandstone, with lined lavatories behind. The remainder of the

undercroft, now the beer cellars of The Boot Inn, has 2
parallel longitudinal barrel vaults with medieval sandstone
east, west and north walls and part of the dividing wall.
The Boot Inn at Row level has oak frame intact but restored,
of 6 bays of similar dimensions to the stallboard and Row walk
bays. The bay posts and beams are of large scantling, but some
have mortice-holes suggesting possible re-use. A
wattle-and-daub panel is displayed. Until 1988 there was an
east passageway, now thrown in with the bar, but no evidence
that it formed part of the C17 structure. The open-well stair,
at west side of the second bay is renewed, but probably in its
former position. The lobby to the rear bar is paved with flags
removed from the undercroft. The rear bar has a C19 range in
the open recess against west wall. Against the east wall an
alcove settle of oak, probably C18.
The third storey has a good parlour over the Row, with mid C17
oak panelling to the 3 internal walls, having 4 rows of
vertically-proportioned panels topped with one row of broad
panels; ceiling of 4 panels with Classically moulded cornices.
Parts of the timber framing, including a good trenched purlin
truss, are visible in the rear rooms.
(Chester Rows Research Project: Harris R: Eastgate Street
North: 1989-1990).