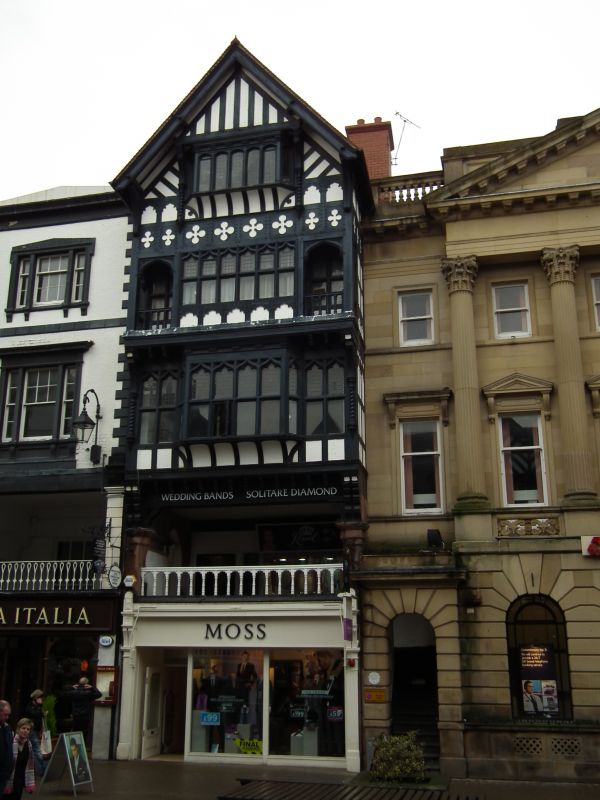 Undercroft and town house now street shop, Row shop and
offices. Rebuilt probably 1888, although Douglas had submitted
proposals in 1867, and G Williams in 1864. Sandstone, partly
now pebbledashed, and timber framing with plaster panels;
brown tile roof with ridge at right angle to street.
EXTERIOR: 4 storeys plus attics, including street and Row
levels, of one bay. Modern shopfront to street of no interest
in C19 frame with timber panelled pilasters and fascia. Timber
Row-front rail has cusped ogees between turned balusters to
heavy moulded rail; red sandstone end-piers through street and
Row storeys. sloping stallboard and the Row walk have surfaces
covered; brick, now pebbledashed, endwalls to stallboard and
moulded brick arches across Row-walk. The C19 shopfront has
door, west, and a 6-light mullioned and transomed window. The
end-piers have moulded sandstone capitals carrying paired
jetty-brackets and shaped brackets to the bressumer which
supports 14 smaller jetty-brackets. Moulded jetty-beam; 10
panels beneath a continuous 10-light mullioned and transomed
window of which the central 6 lights form a canted oriel; the
panes beneath the transom are replaced and those above, under
ogee heads, are leaded; carved frieze and moulded cornice over
the oriel. A barleysugar colonnette on each end-post carries a
shaped reeded bracket to support the fourth storey jetty-beam;
3 secondary jetty-brackets to each side of oriel. The fourth
storey has a central square mullioned-and-transomed bay
window, above 5 arched panels, of 6-lights to front with panes
beneath transom replaced and those above it, under ogee heads,
leaded; each side of the bay-window has a part-glazed door
with leaded overlight to a corner balcony with
spirally-moulded railings and Tudor arches with carved
spandrels to front and sides. The attic storey, boldly jettied
above the bay window, has 8 quatrefoil panels to the front and
one in each return. The gable has a mullioned 7-light leaded
oriel casement on a coved apron, with basket-arched heads to
lights, carved frieze and moulded cornice; 2 cusped ogee
panels to each side. Shaped reeded brackets support
boldly-projecting eaves; spirally-moulded colonnettes support

similar brackets to a further jetty above the oriel;
herringbone struts flank the oriel; close studding in gable
apex; moulded bargeboards.
INTERIORS: the surfaces in the shops are covered. Features
have been retained in the upper storeys, but lightweight
partitioning and linings conceal the effect.
(Improvement Committee Minutes: Chester City Council:
1/3/1864/ & 14/6/1867).