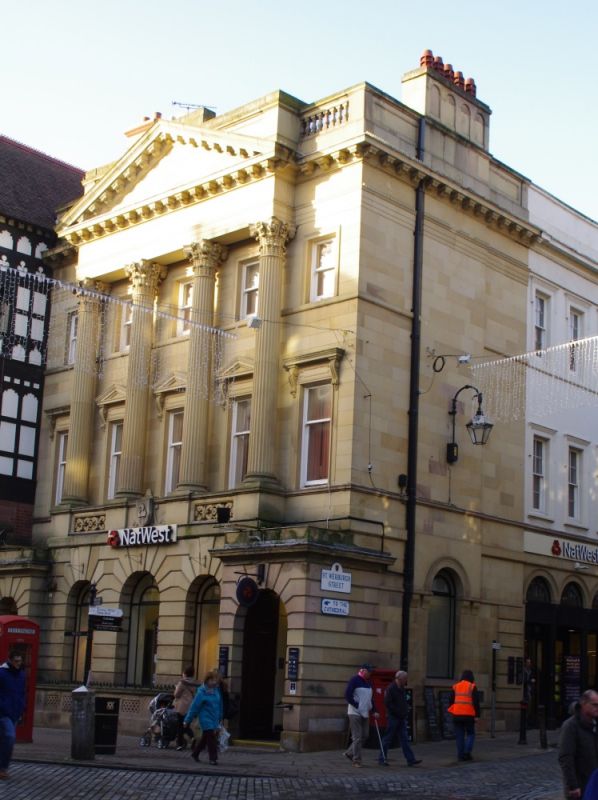 Includes: No.3 ST WERBURGH STREET.
Bank, Dixons or Parrs, now National Westminster. 1859-60. By
George Williams. Yellow sandstone; roof concealed.
EXTERIOR: a symmetrical facade of 3 storeys, correctly
composed and detailed. The rusticated first storey has a high
pierced plinth between 2 porches with round archways: that to
the east, the main entrance, has shaped double 3-panel doors;
that to the west, a little narrower, leads by 13 stone steps
to the east end of the Row. The upper storeys are set back
behind a 4 column Corinthian blank portico; containing 3 tall
2-pane unequal sashes with architraves and pediments on
consoles to the second storey, a third storey sillband and
three 2-pane sashes in architraves. One window-bay to each
side of the portico has similar sashes to each storey, under a
straight cornice on consoles to the second storey and with
architraves to the third storey. Modillion cornices to
pediment and eaves; panelled parapet with vase-balusters;
attic course above pediment.
The east side to St Werburgh Street is more simply expressed.
The first storey has the rusticated east side of the entrance
porch, a lateral chimney with a round arch on brackets above a
small-pane window at its base and 3 triplets of round-arched
small-pane windows with radial-bar fans to the banking hall.
The second storey has a floor-string and 8 unevenly-spaced
recessed sashes, 3 of 8 panes and 5 of 12 panes, in eared
architraves. The third storey has 3 recessed 8-pane sashes
and, in the lower northern portion, 5 shorter 9-pane sashes
above the 12-pane sashes of the second storey; cornice
returned from the Eastgate Street frontage.
The northernmost bay, formerly No.3 St Werburgh Street,
Westminster Chambers, is probably 1867-8 by John Douglas,

designed in conjunction with No.31 Eastgate Street and 25
Eastgate Street Row (qv) in Vernacular Revival style, of red
sandstone and timber frame with plaster panels with grey-green
slate roof, gable to street. The first storey of sandstone has
a 3-light mullioned and transomed leaded casement under a
label-mould and a 12-panel door with overlight in Tudor-arched
surround with carved spandrels and lable. Stone brackets to
timber-framed second storey with close studding and one rail
at transom-level of the 6-light mullioned and leaded casement;
a small leaded casement at each corner beneath the boldly
jettied third storey which has close studding with carved
braces and shaped panel-heads and two 3-light leaded
casements. The gable, like the third storey, is jettied on 2
shaped brackets; panelled herringbone strutting; moulded
bargeboards.
The attribution to John Douglas is tentative; he negotiated
with Chester City Council to set a building line back in St
Werburgh Street in exchange for permission to jetty the verge
at the same time that he submitted plans for rebuilding for
James Dickson of, probably, No.31 Eastgate Street/25 Row which
abutted the yard of No.3 St Werburgh Street.
INTERIOR: the banking hall has a richly panelled ceiling
supported by four Ionic Columns; the secondary entrance is
through No.3 St Werburgh Street; the upper storeys are stated
to be modernised internally.
(Improvement Committee Minutes: Chester City Council:
14/6/1867).