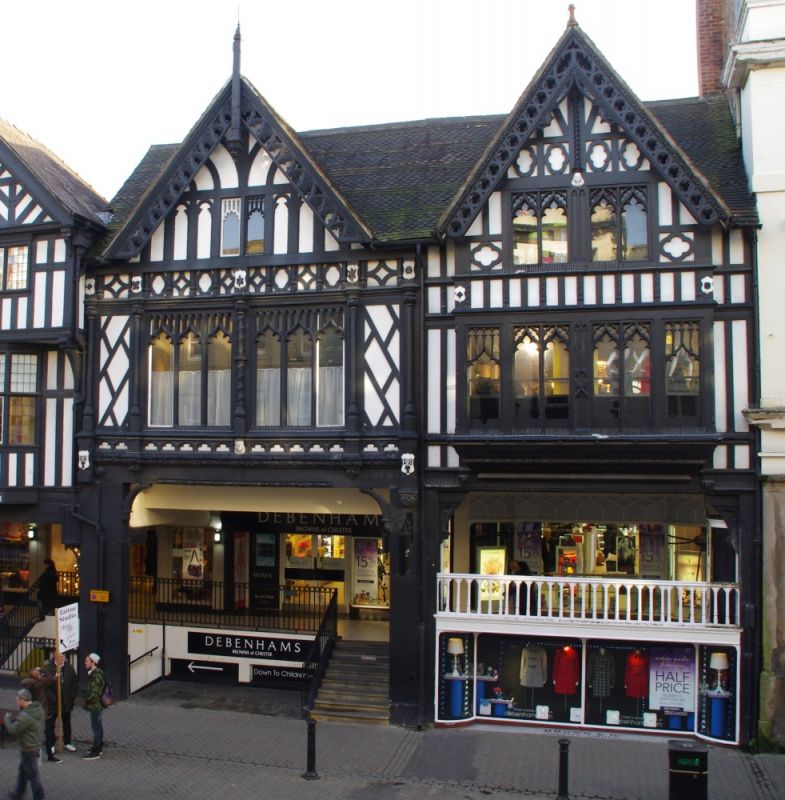 2 shops on site of undercrofts and town houses. 1857. By TM
Penson. For William and Charles Brown. The tenant of No.38
Eastgate Row was Bolland, wedding cake maker by appointment to
Queen Victoria. Timber-framed front with plaster panels;
banded brown tile roofs.
EXTERIOR: 3 storeys including undercrofts and Row, plus attics
in roof. Altered shopfronts to street, recessed with slender
colonnette mullions to No.36 and with 8 sandstone steps to Row
and 2 low modern windows to No.38. Rendered and painted
end-piers probably of stone. The Row storey has timber
Row-front rail on turned balusters to No.38 and modern steel
railing to No.40; boarded stallboard 2.03m from front to back
and terrazzo Row walk to No.38; recess in place of stallboard
and tiled Row walk to No.40; shopfront to No.38 has colonnette
mullions, that to No.40 is modern with no features of
interest; a symmetrical moulded pattern to the ceiling in
front of each shopfront and a bressumer with carved arrises,
on shaped brackets, to each Row-front. The third storey of
No.38 has a shallow square 6-light oriel, on carved and
moulded corbel, with tracery above cusped ogee lights; a close
studded panel to each side of the oriel, divided by a
cross-rail at sill level; No.40 has a foliar corbel on each
end-pier decorated with PB and a Cheshire sheaf, carrying a
colonnette before each corner post; a row of 14 small cusped
panels, a pair of 3-light windows with a colonnette to each
side and, spirally-moulded, at centre; cusped heads to lights,
with tracery above; the timber framing to each side of the
windows is idiosyncratic. The fourth storey of No.38 carries
the planes of the oriel up to the gable, with a row of

small-framed panels in pairs divided by colonnettes; floor and
sill strings; 2 mullioned 2-light windows with cusped-arch
heads and tracery above; small-framing to sides of and above
the windows has quatrefoil bracing; a shield on each
corner-post; a spirally-moulded colonnette on a carved-head
corbel on the centre-post on a carved-head corbel rises to the
gable apex; richly-carved pierced bargeboards; finial replaced
in terracotta. No.40 has moulded floor and sill beams, a row
of 10 ornate small panels with colonnettes and 5
quasi-armorial shields, a 2-light casement with tracery above
cusped arches, narrow panels to each side and curved braces in
the gable apex above, richly carved pierced bargeboards and
carved finial.
INTERIORS: the undercrofts, part of Nos 28 (qv) and 38 Street,
have all surfaces clad. No.38 Row, now part of Nos 34 & 40 Row
(qv), has some pilasters and cornices, an open-well stair with
painted rail on ornate cast-iron balustrade; the third storey
has a panelled barrel vault with leaded glazing in the upper,
skylight, panels; a glazed dome over the stair. No.40 Row has
a probably early C20 stair in a manner appropriate to an
elegant drapery store.
(Improvement Committee Minutes: Chester City Council:
13/3/1857; Chester Rows Research Project: Harris R: Eastgate
Street South).