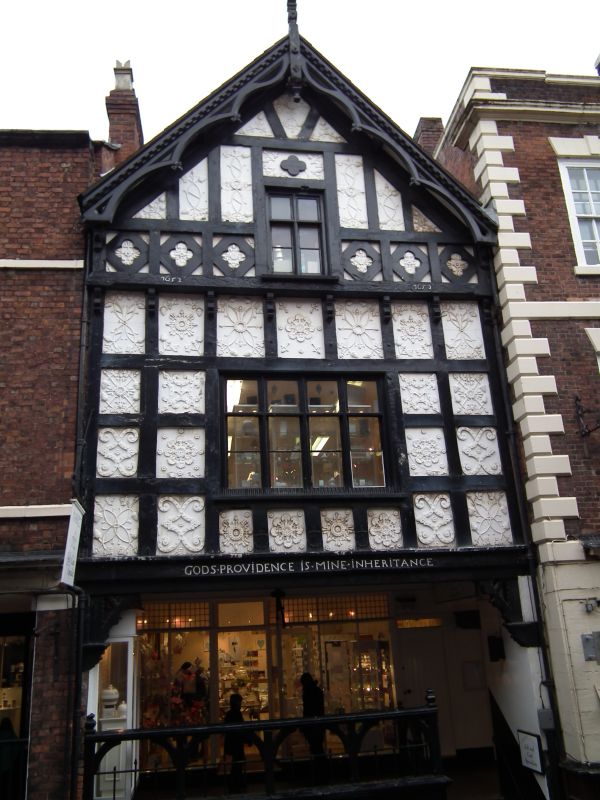 Undercroft and town house, now undercroft shop, Row shop
occupying 2 storeys and a vacant storey. Late C13 to 1652,
largely rebuilt 1862 by James Harrison as shops and town
house. Sandstone and timber frame with plaster panels; slate
roof with gable to street.
EXTERIOR: 4 storeys including street and Row levels; one bay.
Altered shopfront to street with concrete steps to Row, right;
shopfront of early C20 character to Row; rail to Row on
arch-braced posts in Jacobean style with iron dogbars. The Row
fascia is inscribed 'God's Providence is mine Inheritance',
said to be in thanks for deliverance from the plague of
1647-8. Small framing to upper 2 storeys with elaborately
moulded recessed plaster panels; a row of quatrefoil braces
across gable foot; ornate bargeboards and finial. Casement of
four 3-pane lights to third storey and cross-window to fourth
storey, both centrally placed. No visible chimney. The facade
is loosely based on that of 1652, but showier and probably
taller. Rear elevation not visible.
INTERIOR: late C13 west party wall to undercroft of sandstone,
later extended forward to street; rubble sandstone east wall
has 2 beam corbels; C17 beams. An extension to rear of brick
is probably C18 or C19; the ceiling structure is hidden. The
shop at Row level has a painted stop-chamfered beam and a
simple frieze with picture rail and cornice. The third storey,
now a single room, has console brackets at head of stair, a
cornice with fruit motifs, 2 plastered chamfered beams plus
one replaced in steel, and a wheel-shaped moulded plaster rose
decorated with flowers and fruit at the centre of each of 4
ceiling panels.
The attic storey has 3 plain collar trusses, ceiled above
collars.
(Chester Rows Research Project: Brown AN & Grenville JC &
Turner RC: Watergate Street: Chester: 1988-: 4,5,14 & 28;
Bartholomew City Guides: Harris B: Chester: Edinburgh: 1979-).