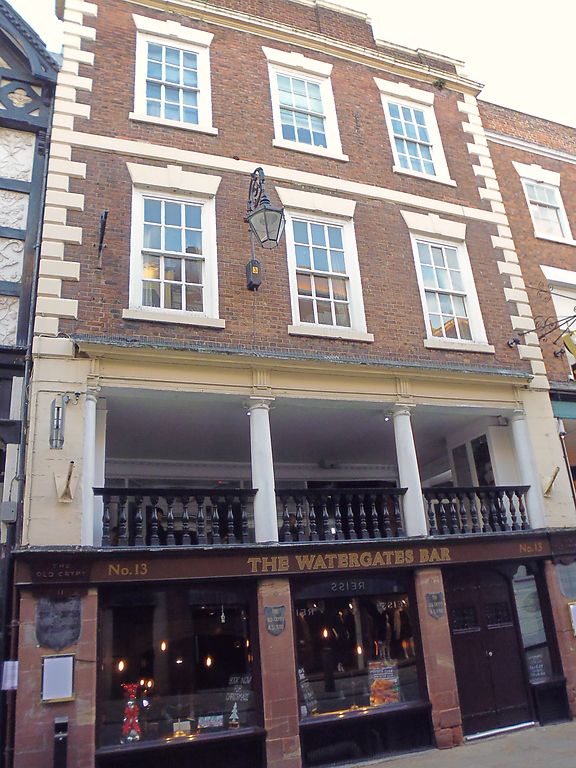 Undercroft and town house now undercroft restaurant, Row shop
and office above vacant. c1300 refronted and rebuilt from Row
level upward c1744. Sandstone and brick; grey slate roof.
EXTERIOR: 4 storeys including street and Row levels; 2
medieval structural bays. Later C19 shopfront to street has 2
intermediate chamfered piers of painted stone to street; 4
raised shields, those over end piers inscribed "Quellyn
Roberts & Co. Wine and Spirit Merchant" and the 2 between
inscribed "The Old Crypt 1180"; boarded double doors right
with wrought-iron grilles and strap hinges; shaped shop
windows. Front to Row has 2 Tuscan columns and timber rail on
vase balusters; end piers have antae; frieze and cornice with
a triglyph over each column and half triglyph over each anta.
C20 shopfront and late C20 entrance, right, to No.15A flanked
by reeded pilasters carrying frieze and modillion cornice,
early C19. Brown brick upper storeys in irregular Flemish bond
have rusticated quoins, band at 4th storey floor and moulded
cornice of painted stone; plain stone sills and rusticated
wedge lintels to 3 near-flush sashes in each storey, with
glazing bars; stone-coped parapet. 2-storey brick extension
with ridge parallel with street, C17 at its west end but
largely rebuilt and probably extended C19.
INTERIOR: the fine undercroft, c1300, has walls to sides, rear
and parts of front of coursed rubble sandstone with
colonnettes carrying the chamfered ribs of a 4-bay
quadripartite sandstone vault of 2 naves with 3 octagonal
columns; the colonnettes have roll-moulds on bell-shaped lower
mouldings; the columns have roll-moulds; a small rectangular
recess at shoulder height in the left wall of the second and
fourth bays; the right wall has an inserted pointed-arched
opening with continuous chamfer, leading to the undercroft of
No.13 (qv); the rear wall has a similar archway, probably
original, leading to the eastern of 2 stone-walled rear
chambers, each with a brick barrel vault, probably C18. The
main undercroft is 13.5 x 6.2 m with walls 1.2m thick; its
front wall is 2.4m behind later encroachment of the shopfront

onto the street.
No.15 Row occupies only the north-eastern quarter of the
Row-level storey, with modern internal cladding concealing
walls and ceiling; No.15A occupies the west and rear of the
property at Row level and the whole of the third and fourth
storeys, restored and converted for office use, with
rearrangement of some internal features, early 1980s. The
altered mid C18 open-well open-string stair to third storey
has 3 turned balusters of alternating form to each step,
carrying a swept handrail; the stairwell has a panelled dado,
and plaster panels above a stringcourse at upper level; a
plaster ceiling panel, partly boxed in. Principal doors have 6
fielded panels; the architraves where facing the stairwell are
shouldered. A Classical doorcase opposite the stairhead and
repositioned has pilasters with Ionic fluting, a fanlight
without glazing bars and a frieze with triglyphs. Front room
has dado rail with alternating broad and narrow tall panels
above, modillion cornice, repaired ceiling rose and brought-in
marble fireplace. West rear room in main building has stone
fire surround of early C18 character; there are cast-iron
fireplaces, most C19. Dogleg stair to fourth storey has turned
balusters; rear stair of stone from undercroft to Row level.
Inglenook with moulded oak bressumer against west gable of
rear wing at Row level, which suggests that the rear wing may
have been built as a separate dwelling in the C17; c.f. The
Lyon House, No.23 Row (qv).
(Chester Rows Research Project: Brown AN & Grenville JC &
Turner RC: Watergate Street: Chester: 1988-: 6,11,12,15,23,28;
Bartholomew City Guides: Harris B: Chester: Edinburgh: 1979-).