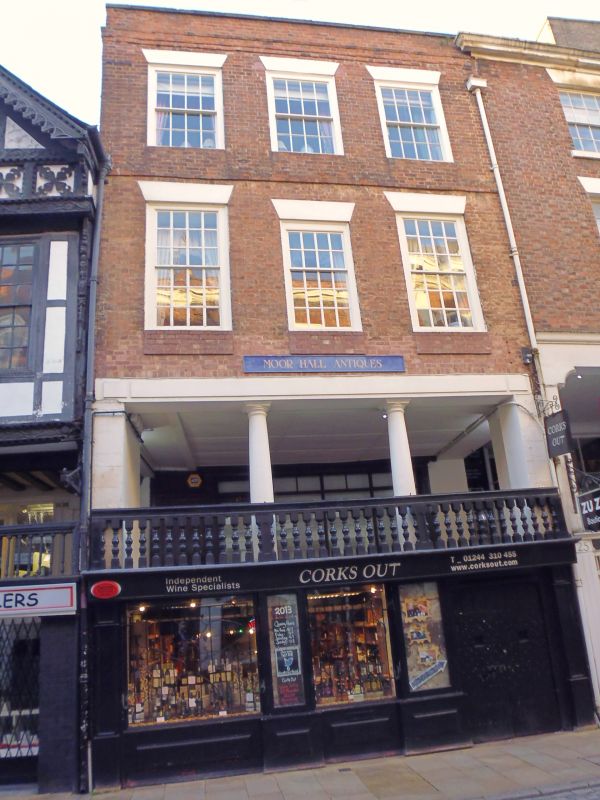 Undercroft and town house then shops; and in October 1991 a
small undercroft office, a Row shop and vacant upper storey.
C13, rebuilt from Row level upward mid C17 at rear and early
C18 at front as shops and town house with C20 internal
alterations. Sandstone undercrofts; brown brick upper storeys
with some timber framing at rear and inside; grey slate roof,
ridge at right-angle to front.
EXTERIOR: 4 storeys plus deep undercroft below street level;
roof attic. Central part-glazed door of 2 panels to street
with plain shop window to left and boarded double warehouse
doors to undercroft, right. 2 Tuscan columns to Row front,
with timber rail on panelled posts and heavy turned balusters;
altered Georgian shopfront to Row has boarded door, left.
Third and fourth storeys are of brown brick in irregular
Flemish bond with raised panels under windows, those on the
third storey replaced in simplified form; 3-course band at
fourth storey floor level. Nearly flush sashes; the third
storey has a central 12-pane sash with a taller 24-pane sash
to each side; a blocked opening at centre of the fourth storey
with a 16-pane sash to each side; plain wedge lintels of
painted stone; simple stone-coped brick parapet. The rear is
brown brick in irregular bond with minimal small-framing to
main gable.
INTERIOR: the late C13 undercroft has coursed sandstone rubble
walls and a quadripartite vault of 3 bays with chamfered ribs
on moulded corbels. Half of the front bay is cut away to
accommodate a deep stone-cut cellar and a self-contained shop.
The main undercroft chamber has a brick floor; a later rear
extension has walls of rougher sandstone rubble and a probably
C18 brick barrel-vault with a rear wall now lined with
breeze-blocks.
The shop at street level has no visible features of special
interest. The Row shop has surfaces covered and a fairly
modern repositioned stair to the third storey. The front
chamber of the third storey has early C18 panelling, alcove
cupboards and overmantel to the side walls; there is one row
of fielded panels beneath the dado rail and one above, with

cornice removed, front wall altered and rear partition
removed, leaving only the corner breast with fireplace of the
former inner room. 2 eared architraves to doorways, one
damaged. The former rear gable wall and the lower rear wing
have timber framing. An oak dogleg closed string stair to the
fourth storey has square newels including a through
winder-newel at the turn, 2 column-on-vase balusters per step
and straight rails. A similar stair from the fourth storey to
the loft. The fourth storey has doors of 2 and 4 fielded
panels, probably oak. The front chamber has panelled
embrasures with benches. The middle room has a corner
fireplace with damaged panelled overmantel. The attic has a
probably C18 purlin roof.
(Chester Rows Research Project: Brown AN & Grenville J &
Turner RC: Watergate Street South: 1987-).