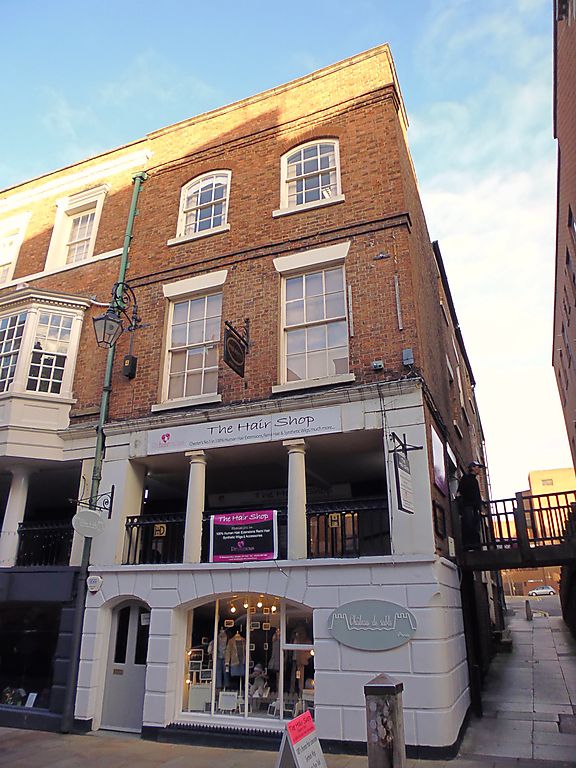 Undercroft and town house, now shops and offices. The
undercroft is probably C14, timber framing of the upper
structure C17 and brick facade and casing mid C19. Sandstone,
timber framing and Flemish bond brown brick; grey slate roof.
EXTERIOR: painted rusticated stone front below Row and to
corner with Goss Street has a segmental-arched doorway
containing a covered broad-board door, west, and a
camber-arched 4-pane central window. Rendered brick end-piers
to Row; 2 intermediate Tuscan pillars; cast-iron railings with
round-arched heads carry a double rail separated by roundels;
rendered bressumer with cornice moulding; rendered front to
Row shop has a half-glazed 4-panel door between panelled
pilasters at west and a small 3-light camber-arched shop
window at centre. 2 recessed 12-pane sashes to third storey
have painted stone sills and wedge lintels; brick
string-course, with one upper course oversailing 2 courses, at
second floor; 2 nearly-flush sashes to fourth storey have
painted stone sills and gauged brick arches; brick cornice
projects in three stages: 1 course; 2 courses; 1 course, below
a parapet of 11 courses with a moulded stone cap. The east
side to Goss Street has a recessed doorway in a shouldered
architrave approached by 6 repaired stone steps, with a door
of 6 fielded panels. There are 12-pane and 16-pane sashes and
a 16-pane stair window. The full-width gable to rear is
largely concealed by No.1 Goss Street (not included).
INTERIOR: the west wall of the undercroft contains a formerly
4-bay structure of Samson posts carrying a damaged bridging
joist of large scantling. The front post, partly cut away, has
a damaged jetty-bracket towards the Row. 2 Samson posts remain
further back, with a chamfered cross-beam on the bridging
joist opposite each carrying broad, heavy common joists. Brick
supports are inserted under the east ends of the cross-beams.
There is a barrel-vaulted rear extension of plastered brick,
probably C18, not of full width. The shop at Row level has a
timber post exposed in the west wall and a panelled window
embrasure. The structure of the third and fourth storeys are
concealed by modern surfaces; there is a simple panelled