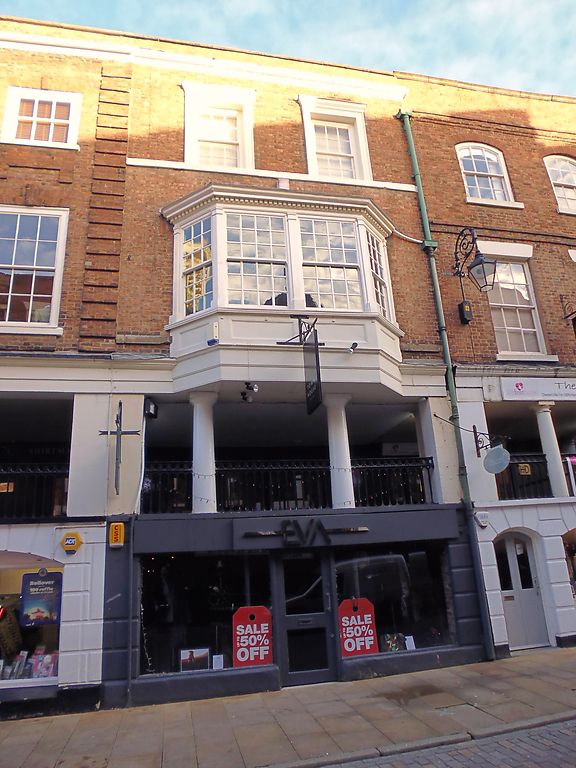 Undercroft and town house, now shop, restaurant and flat.
Undercroft probably C14, extended rearward C18, with the upper
structure possibly of contemporary origin but altered C17 and
refaced early C19. Stone, timber frame and Flemish bond brown
brick; grey slate roof.
EXTERIOR: 4 storeys including undercroft and Row levels.
Painted stone undercroft contains modern shopfront; painted
stone end-piers to Row with 2 intermediate columns of Tuscan
derivation; cast-iron railings with round-arched heads carry a
double rail separated by roundels; rendered front of No.24 to
Row has half-glazed door with 2 flush lower panels and arched
1-pane window. Brick third and fourth storeys; a large central
canted oriel to third storey has two 24-pane sashes to front
and an 18-pane sash to each side, with a recessed panel
beneath each sash and a dentilled cornice above; two 12-pane
recessed sashes in architraves with entablatures to fourth
storey; the cornice carries a later stone-capped parapet.
The rear gable is partly masked by later buildings on Goss
Street.
INTERIOR: the structure of the medieval undercroft is
concealed by removable lightweight cladding; there is a brick
barrel-vaulted rear extension, probably C18. At Row level
there is evidence of a late medieval hall behind a shop bay,
probably formerly with a passage, west. In the front portion,
posts of large scantling carry 2 chamfered beams with brackets
at west end; small panelling to west wall. A cross-beam has
been cut to allow conversion of a C17 dogleg stair from Row
level to third storey to an open-well stair; the altered
stairwell has close studding of poor scantling and shows that
the roof was raised in the C16 or C17 and C19. On the third
storey there are doors with 2 small central panels between a
large lower panel and upper panel, and 6-panel doors; the
front room is of Georgian character with a dentil cornice; the
rear room has fireplace with a plaster overmantel of 2
round-arched panels removed from No.22 Row (qv). An altered
newel stair of early C18 character leads to the fourth storey
where all structural features are concealed.