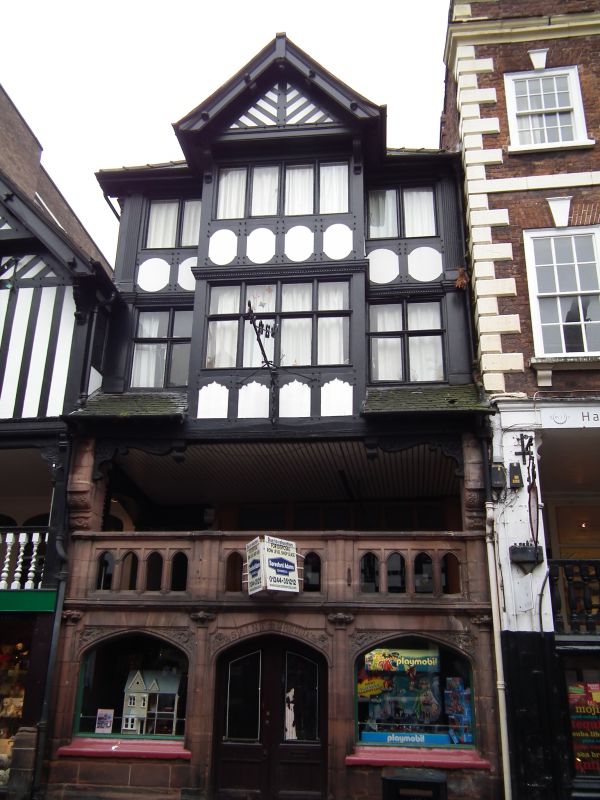 Undercroft and town house now undercroft shop with newspaper
printer at Row level and above. Probably c1180 to c1280; C16
or C17; largely rebuilt from Row level upward and refronted at
street level late C19; altered C20. Sandstone at street and
Row levels, timber frame with plaster panels above; slate
roof.
EXTERIOR: 4 storeys, one bay. Street level has half-glazed
shaped double doors with shaped window to each side, under 3
low arches separated by C13-style half columns. The Row front
has sandstone end piers, each with corbel to front and carved
bracket of long reach to inner side, ending in a pendant; the
sandstone balustrade has 3 panels, each with 4 arched
openings; modern shopfront. Each upper storey has a tripartite
window of 2;4;2 lights; the central portion projects to form a
2-storey square oriel carried on the Row bressumer, with small
pentice roof to each side; the third storey has a transom. The
ends of posts of the small framing are carved as Ionic
pilasters. The hipped roof has a gablet over the oriel, with
herringbone struts, plain bargeboards and a truncated
bargepost. A modern extension conceals the rear.
INTERIOR: the undercroft is of 5 and a half bays; the first
half bay is an encroachment on the street; the next 3 bays
have oak beams; the rear 2 bays have a quadripartite vault,
late C13 or possibly earlier, with chamfered ribs; the rear
doorway with a round, continuously chamfered arch suggests
that it and the undercroft walls are late C12, the earliest
features yet dated in the structure of Chester Row
undercrofts; the early masonry continues under the Row, but
not under the stallboard. A few panels of C16 or C17
small-framing are visible in the west wall at the stairwell to
the third storey; a king-post rooftruss over the fourth
storey, probably C19, contains some reused C17 timbers.
Included as Grade I in recognition of the special interest of
the undercroft.
(Chester Rows Research Project: Brown AN, Grenville JC &
Turner RC: Watergate Street: Chester: 1988-: 11-16, 23).