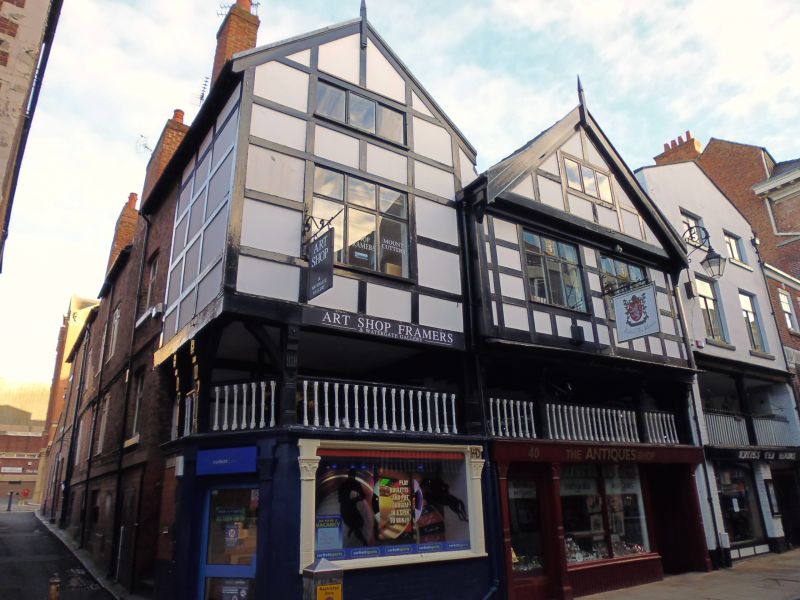 2 undercrofts with a town house 17.5 metres wide above, now 2
undercroft shops and bookmakers and 2 Row shops, one of 2
bays. Parts of the early-mid C14 structure survive at all
levels; from late C16 onward the storeys from Row level upward
have been modified, but they are the best example in Chester
of the rarer type of medieval town house which had hall and
buttery parallel with the street. The fronts were largely
rebuilt C19 and early C20. Sandstone, timber framing, brick;
grey slate roofs.
EXTERIOR: the building now has 4 storeys including
undercrofts, Row level and the third and attic storeys which
were inserted.
The front to the undercroft of No.38, rebuilt in brick, has no
elements of special note; the east party wall of medieval
coursed sandstone is visible. The Row front has end-piers
rebuilt in brick, a central Tuscan column, spiked cast-iron
railings and a bressumer with facia and cornice; the frontage
of the former house to the back of the Row walk is rendered,
with a tripartite sash of 8;16;8 panes west of centre and a
modern glazed door in a pilaster doorcase. The third and attic
storeys with gable to street are rendered, with 2 replaced
windows to each storey. Nos 40 & 42 have late C19 shopfronts
to the undercroft with moulded window frames and pilasters
which have bell-shaped capitals. The Row front, with 2 bays to
No.34 and one to No.36, has 4 shaped posts and a timber rail
on thin turned balusters; the posts at the corners of No.34
are set against medieval jowled oak posts morticed for a deep
guard-rail, now lost; there are 2 shaped posts to Crook
Street, c1900. The frontage of the former houses to the back
of the Row walk has a cross-boarded oak door of heavy oak
planks on long wrought-iron hinges in a moulded oak frame of
large scantling and an inserted 2-light window. The applied
timber-framed fronts to the third and attic storeys, each with

a gable to the street, are c1900 and of no interest. Behind
the Row walk the west side of No.42 Street and No.36 Row to
Crook Street is of C17 brick, repaired in parts C20, with a
brick band of 3 courses at third storey floor, a corner
chimney, a large lateral chimney and a smaller chimney further
back; replaced cross-windows have cambered brick heads. The
rear has a gable to No.32, a roof parallel with the rear to
No.34 and a long, gabled rear projection to No.36, altered
loading doors to the third storey, altered windows and a
chimney between Nos 32 & 34.
INTERIOR: the undercroft to No.38 Street has whitewashed
coursed rubble sandstone walls, a doorway with chamfered jambs
and a plain lintel on cusped corbels, a small recess at floor
level in the west wall, a broad 3-centred chamfered stone arch
carrying the front wall of the great hall above, with corbels
for floor joists projecting from its front and rear faces, a
corbel in the rear wall near the north-east corner; there is
an arch-braced chamfered cross-beam in front of the arch and
one behind it; the braces are on corbels shaped to their
profile, the beam ends on bridging joists carried on rounded
stone corbels. The front part of the undercroft to No.40
Street is concealed by removable cladding; the rear part
entered from No.42 Street shows coursed rubble sandstone
walls, the rear face of an arch similar to that in No.38
Street, carrying the front wall of the hall above, and an
arch-braced beam similar to the rear beam in No.38 Street.
At Row level No.32 stands above No.38 Street, No.34 stands
above No.40 and No.36 above No.42. Nos 32 & 34 Row contain the
former great hall and screens passage, with the chambers in
front of them; No.36 Row occupies the former buttery and front
chambers, and a later rear wing, now incorporating No.2 Crook
Street (not included) which has no visible internal features
of special interest. Interconnected, Nos 32 & 34 Row are
described together. Much of the walling of the hall is
concealed by later finishes in No.32, but is visible in all
storeys of No.34. The screens passage, shown as an access on
maps before 1875, is marked by the front and rear doorways of
No.34, an altered archway in the front wall of the hall and 3
chamfered pointed arches in the party wall with No.36, now
blocked; there is a rebated pointed archway formed of 2 stones
in the front wall of the hall east of the screens passage; the
corbels for the former chamber floor joists are visible.
Within the hall a large early C17 stack with back-to-back
inglenooks at Row level was inserted, with an intermediate
floor with crossed chamfered oak beams, a timber-framed
partition wall between Nos 32 & 34, fireplaces to the third
storey, that to No.34 having a plaster overmantel with round
panels between incorrect Ionic pilasters, and a ceiling with

moulded plastered beams. There is a stair in each property
thus formed, against the front wall of the former great hall.
There is some small panelling against the partition in No.32.
The altered stair in No.32 is in a close-studded well; the
stair with ornate balusters survives, damaged, between the
third and fourth storey in No.34 and a section of balustrade
is displayed. Part of the stone flag floor is visible at the
foot of the stair in No.32. There is damaged timber framing of
the partition between front rooms of Nos 32 & 34 and large
framing between Nos 34 & 36. There is a corner fireplace in
the front room of No.32.
The undercroft of No.42 Street is wholly covered in modern
lining, with no structural features visible. The rebated side
of the 3 buttery arches show in the party wall of No.36 Row
with No.34 Row and there are 3 beams to the Row storey
ceiling. The front room of the third storey is plastered
except for a glazed panel showing the large framing and wattle
of the party wall with No.34; the second room has a chamfered
beam from front to back and later joists; a chamfered beam
over the partition to the third room; a corner fireplace in
the third room. The attic storey has a 2-panel door to the
front room; the ridge-piece, rough purlins and 2 collars are
visible.
The form of the medieval house is comparable with Tackley's
Inn, Oxford.
No.38 Street and No.34 Row were listed on 10/01/72.
(Chester Rows Research Project: Brown AN & Grenville JC &
Turner RC: Watergate Street: Chester: 1988-).