A Grade I Listed Building in Guildford, Surrey 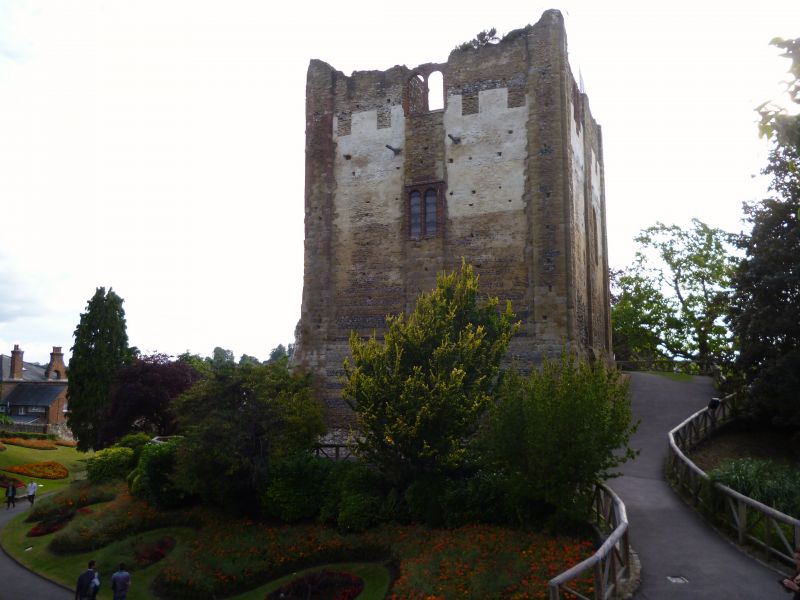 Remains of tower keep. Mid C12 (first mentioned in written record in 1173), partly
rebuilt after fire in C13 and converted to a house for Francis Carter in early C17;
further altered and restored in C19 and C20. Bargate rubblestone with some chalk
and flint, ashlar quoins to angles and on buttresses; some decorative bands of
stone laid in herringbone pattern. Square keep on earlier mound, probably on the
site of earlier wooden keep and shell keep. Internal floors and roof now gone. 14
metres square and 19 metres high, three storeys with battlemented parapets. Angle
pier buttresses and centre pier buttress on each side with plinths below battering
outwards. Original entrance at first floor level, ground floor used for storage
and illuminated by slit windows. South face: Brick-dressed, mullioned 3-light window
at first floor level, to left of centre buttress, with chamfered surround. Round-
arched opening above to right of buttress in deep surround; corbelled garde-robe,
inserted in early C17 above. Two-light, round-arched opening on upper floor on top
of central buttress. East face:- Two round-arched, two-light openings in central
buttress at first floor and upper levels, stone blocks below lower window forming
buttress. North face:- Irregular slit fenestration in lower stages, two-light
round-arched opening to upper stage, left of centre, and round-arched ashlar-
dressed opening to right of centre in middle stage. West face:- Entrance front of
keep with the central pier buttress now largely destroyed. Two-light round-arched
opening to upper stage, original first floor entrance, where a tall narrow passage
led to the hall, now blocked. New entrance on ground floor.
Interior:- Offsets in internal walls show where original floors were positioned.
First floor hall with fireplace on one wall and deep window embrasures; in the
western and southern walls small chambers have been constructed. Chamber in the
south west corner was probably a chapel and has barrel-vaulted roof and blind
arcading on one wall comprising attached pilaster piers under Norman leaf-carved
capitals. The chalk walls are covered with medieval graffitti. The Keep was in
use as a prison by the end of the C12 and the new apartments built to south west
became a popular residence for Royalty in the C13. Henry III turned Guildford
Castle into one of the most luxurious palaces in England and organized the
rebuilding following the fire. Originally the exterior was whitewashed and the
interiors were painted by William Florentyn who possibly also worked at St. Marys
Church in Quarry Street; the main hall was marbled and the ceiling green and gold.
The keep is part of a scheduled Ancient Monument, Surrey Monument No. I.