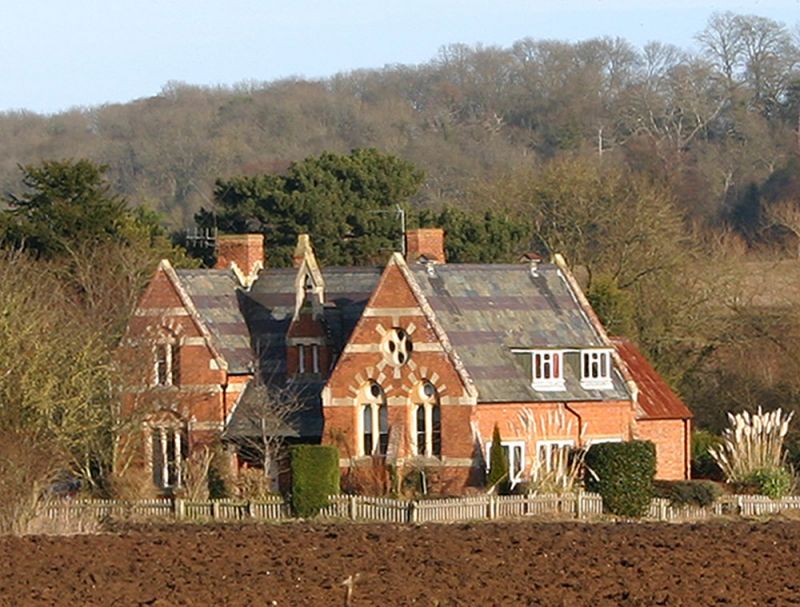 School, now house. c1860. By Sir George Gilbert Scott. For Sir
John Mordaunt. Brick with ashlar dressings; gabled slate roofs
with truncated brick cross-axial stacks.
PLAN: single storey with attic; 2-storey cross-wing to each
end.
EXTERIOR: flush bands of ashlar and brick and ashlar coped
gables; centre has roof carried down over verandah on posts
with cusped braces. 2 entrances under verandah have banded
segmental-pointed arches flanking 2 lights with ashlar
lintels. Wings have windows with stop-chamfered mullions and
banded voussoirs, most with leaded glazing; wing to left has
segmental-pointed head to 3-light window with banded tympanum;
first floor has similar 2-light window; wing to right has 2
pointed 2-light windows with roundels to tympanum; round
window above has plate tracery with 4 roundels. Central gabled
dormer has 2 lights under lintel band and gabled bellcote;
stack to right and to left wing.
Rear has similar details: windows to centre with mullions and
banded voussoirs; and one to wing to right over lean-to
outshut; wing to left has straight-headed mullioned window to
lower gabled wing; central flat-roofed 2-light dormer probably
later. Small later gabled addition to right end.
INTERIOR: not inspected.
Part of a group of estate cottages and other buildings.
(Hamilton, E: The Old House at Walton: Salisbury: 1988-: 232).