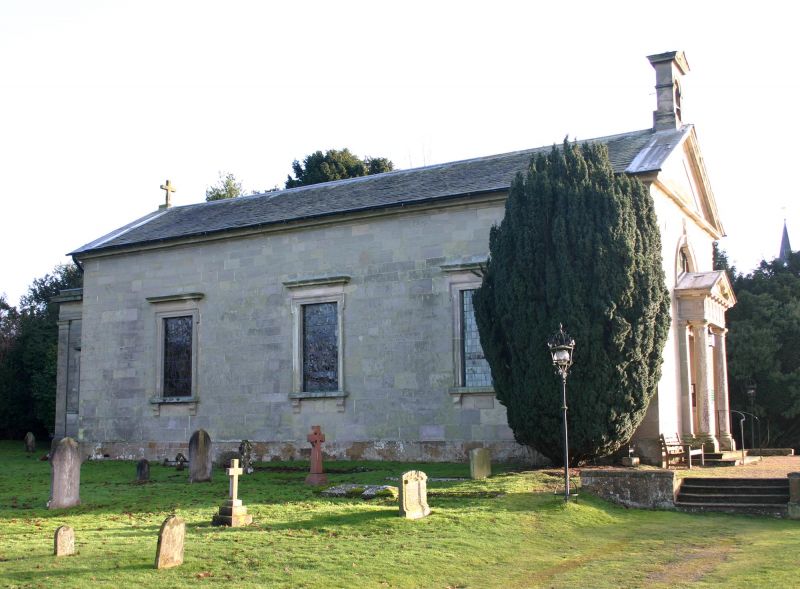 Church. Rebuilt 1750 for Sir Charles Mordaunt; enlarged 1842
for Sir John Mordaunt. Limestone ashlar on dressed stone
plinth; slate roof.
PLAN: 3-bay nave and straight-ended chancel projection.
EXTERIOR: 1842 chancel has angle pilasters and top
entablature; Venetian east window and tall return windows with
eared architraves, friezes and cornices. Nave has top cornice;
windows to north and south have eared architraves, friezes and
cornices, and a similar small vestry window to west end of
north side. West end has pediment with 1842 bellcote in form
of triumphal arch with pediment; c1900 Diocletian window above
entrance which has Doric porch with triglyph frieze and
guttae, and paired 3-fielded-panel doors with similar panels
above.
INTERIOR: dates from mostly 1842 extensions: flagged floor.
Chancel has coffered barrel vault and rich mouldings to east
window including band of scrolly foliage round arch. Nave
walls have sill course with imbricated moulding to windows
with eared architraves, friezes and cornices; rich frieze and
cornice with paired acanthus modillions; coved and coffered
ceiling has 3 large wheel motifs; west gallery, extended
forward c1900, on timber antae with Greek Revival capitals;
panelling to vestry in north-west angle incorporates 1842
stained-glass roundel from east window.
FITTINGS: pudding-basin font of uncertain date, with C19 base;
most furniture dates from alterations of c1900, including
benches, reading desks and pulpit with guilloche mouldings and
some marquetry.
STAINED GLASS: 1897 east window by Clayton and Bell, similar
adjacent windows dated 1905 and 1907; nave north windows dated
1902 and 1933, the latter by Maile and Son of London; south
windows have 1900 decorative stained glass of roundels with
undulating border.
HISTORY: the original church served the lost medieval village
of Walton d'Eivile, which stood to the south of Walton Hall,
and which disappeared in the C16.
(The Buildings of England: Pevsner, N & Wedgwood, A:
Warwickshire: Harmondsworth: 1966-: 441; Hamilton, E: A
History of St James's Church, Walton d'Eivile: Walton: 1988-).