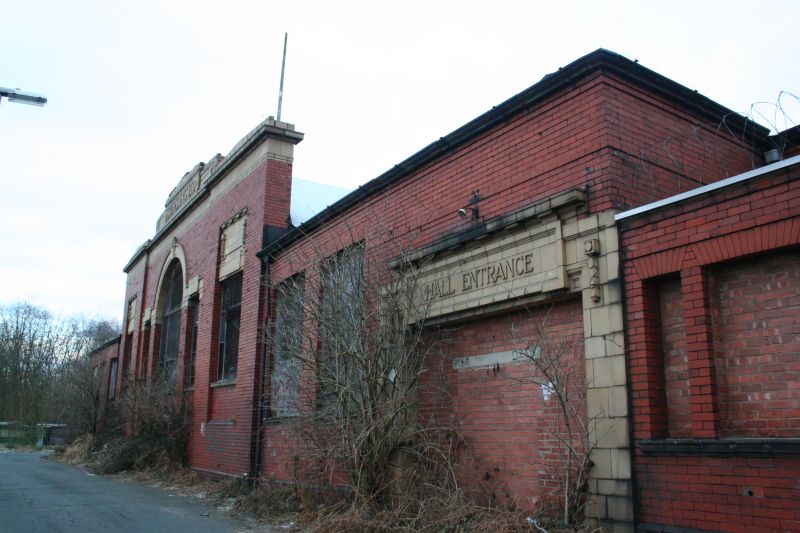 Canteen and club to cotton mills; now games hall. Probably
c1920, for Farington Eckersley & Co. Ltd; altered. Glazed red
brick with buff terracotta dressings, slate roofs on various
levels. Comprises various elements within an overall
rectangular plan, with a main hall set laterally towards the
west end and canteens east of that. Edwardian Baroque style.
Single storey, to varied levels.
EXTERIOR: south facade, main hall has large Venetian window in
centre, tall square-headed windows in flanking bays with
enriched terracotta panelling in the heads, a terracotta
frieze and cornice, and a high parapet with central terracotta
upstand containing a panel lettered "ECKERSLEYS". Left and
right are lower wings, that to the left having 3 square-headed
windows with flat-arched brick heads (all now boarded), that
to the left 2 similar windows (likewise boarded) and a very
wide rectangular doorway (now bricked up) with enriched
terracotta surround including a panelled lintel lettered "HALL
ENTRANCE". A lower range continued to the right of this
(apparently forming a narthex to taller rooms behind) has 5
tripartite windows (all now bricked up) and between the 4th
and 5th of these a doorway with enriched terracotta surround
including a panelled lintel lettered "GOODS"; and rising above
to the rear of this wall are 2 taller elements with large
semicircular terracotta arches (now bricked in) framed by
pilasters, and small side wings.
Forms part of important group of cotton mills and ancillary
structures on this site, collectively a very striking feature
close to Wigan Pier.