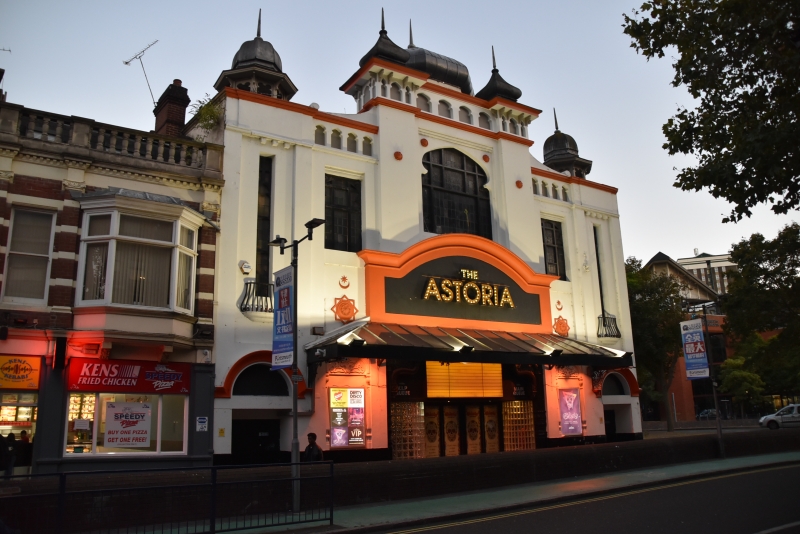 Nightclub, built as a cinema in 1920-1 for Portsmouth Cinemas Ltd, to the designs of A E Cogswell. Builder: Frank Privett. Brick with render, and elaborate roof of onion domes. Small double-height auditorium with balcony, entered through foyer, now adapted as night club.

EXTERIOR: Elaborate symmetrical street facade in Indian Moghul style, culminating in an exotic roofline. A bulbous central `onion' dome, flanked by smaller flattened domes, surmounts the stepped-up portion of the facade, which rises above lower wings. This middle section has a large window with a stylised Islamic arched top and set within a shallow squared niche. The lower wings have vertical sections which break forward at the ends of the facade and are embellished with pilasters. These lower wings have vertical rectangular windows in recessed areas and tall narrow slit windows in the end sections between the pilasters. There is a cornice frieze along the entire facade, the middle portion of which is decorated with niches. Surmounting the vertical sections at the ends of the facade are octagonal colonnaded and domed pavilions. All the domes are topped by pinnacles. Below the vertical rectangular windows is plaster decoration in the form of half-moons and star motifs with rosettes in the centres. Leaded glazing to the three central windows.

The lower portion of the facade has a more Western character: the slit windows at the sides have decorative balconies with iron balustrades of baroque form and there is a segmental pediment over a lead canopy. The tympanum inside the pediment originally carried the name of the cinema. The main entrance is located beneath the lead canopy and has Islamic decoration in the corners of its arch. Flanking this are shallow niches with half-pilasters and quasi-Islamic decoration in the tops. There are Arts and Crafts style hood mouldings over the emergency exit doors at the extremities of the facade.

INTERIOR: Interior. The auditorium is unusual in that the screen was originally behind the entrance, and has not been changed round, as was commonly done. It is entered via a narrow foyer. The interior has been altered for use as a nightclub, although the shape of the ceiling survives and the raking underside of the balcony can still be seen. The stairs to the balcony on the left of the auditorium, perhaps designed for the orchestra, also survive together with a relieving arch on the half landing.

Analysis
This is one of the most outstanding buildings by the significant local architect A E Cogswell. Cogswell served in the First World War in India, so that the Moghul style adopted here was based on sources seen at first hand. Opening the cinema on 21 February 1921 the Mayor, Councillor John Timpson, described it as 'one of the most opulent of local picture palaces'. Although unusual in its motifs, the arrangement of the facade with its strong central feature is typical of Cogswell's work. This is a fine cinema facade of the early 1920s, expressive of the purpose of the building, to amuse, and it stands within an established tradition of the use of exotic styles for entertainment buildings, c.f. the mid- nineteenth-century Alhambra Theatre in Leicester Square, demolished in 1936. While not unique, this treatment is unusual and few examples of the type have survived. The cinema forms a strong entertainment group with the grade II* listed Theatre Royal opposite.