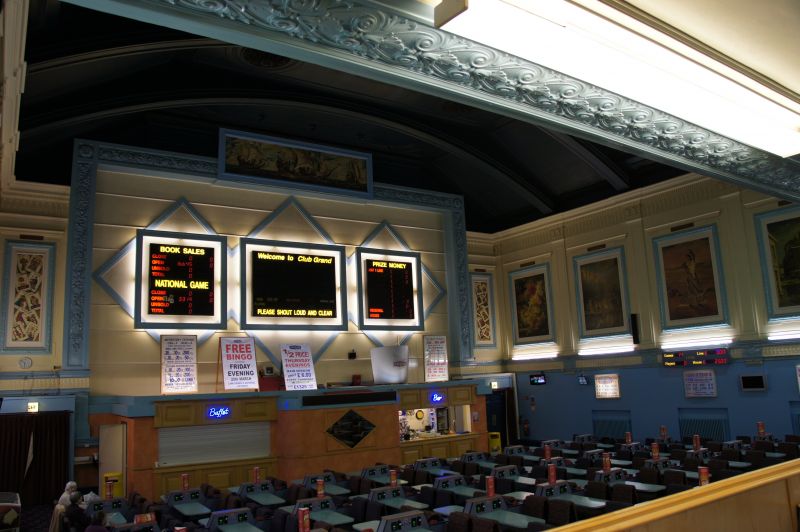 EXTERIOR: Neo-classical two-storey five-bay rendered principal facade, rising to a third storey over the centre bay. The entrance is in the centre bay, the others being filled by shop units. A canopy runs the length of the facade, the central section rising in segmental form. In the four outer bays of the first floor there are triple-light windows with plate-glass sashes. The central bay breaks forward and has three sets of smaller paired windows, again with sashes containing plate-glass. The entire first floor has channelled rustication. Full entablature with panels of cruciform ornament in the parapet. The attic storey has three sets of similarly glazed paired windows and is surmounted by a broken pediment flanked by funerary urns with, at the summit, a plinth supporting a figurative sculpture in female form. There is original lettering in the pediment: THE GRAND CINEMA; further old lettering below the attic windows: GRAND. Three steps up to entrance.

INTERIOR: A foyer leads to a rectangular double-height auditorium in which the sides, over a dado, are divided into bays by pilasters. In each bay there is a panel containing late twentieth-century paintings of mountain scenes, a view of Rome, a copy of `Boulter's Lock on the River Thames' etc. Embellished frieze, above which is a complex cornice. Barrel ceiling divided by curving members into sections in which are roundels. Wide and elaborately ornamented proscenium, over which is an entablature and tablet, the latter obscured by a late twentieth-century panel representing galleons at sea. Stage blocked off for bingo use. Straight-fronted balcony but with opulent decoration in the form of medallions and scrolls.

ANALYSIS: An early `super cinema' from the 1920s, having an unspoilt facade, unaltered plan and much surviving internal decoration. It has been a bingo club since c.1977.