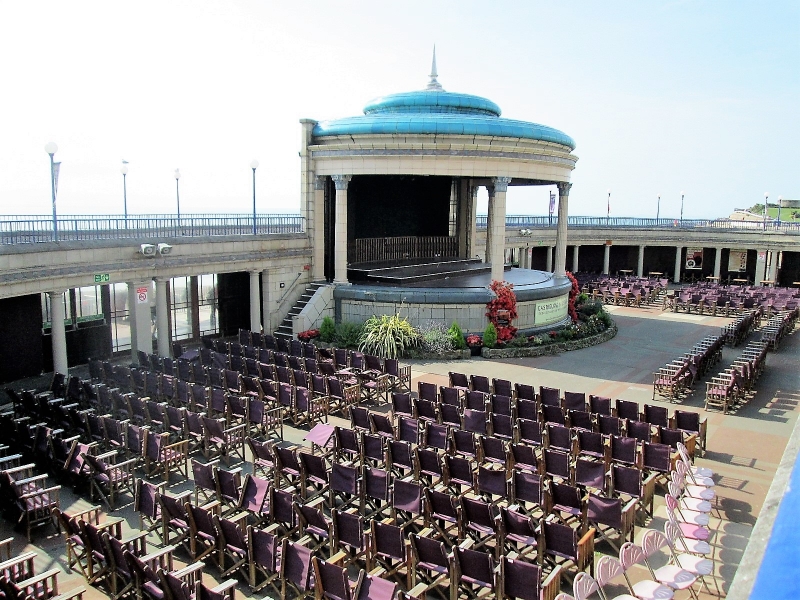 II
Bandstand with attached colonnade and viewing decks. Built in 1935 to the designs of the Borough Council Engineer, Leslie Rosevere. Neo-Grec style, constructed of cream faience with some decorative blue, green and black faience.
PLAN: It is of a symmetrical design with the bandstand set in a sweeping open arcade facing two covered viewing decks topped with an open viewing area, all to take advantage of the change in level from the promenade to the seafront. The bandstand is of circular plan form which is truncated on the seaward side.

EXTERIOR: The bandstand has a deep blue shallow saucer roof in two steps surmounted by a conical finial (now replaced in glass reinforced plastic). The moulded cornice incorporates a strip of opaque brown and yellow glass providing integral lighting. The roof is supported by four giant fluted composite columns set on a raised fluted podium with a flight of steps at each side. It has a set of sliding hardwood doors set in a channel to run behind the columns. The ceiling supports a contemporary square clock. There is a date tablet to the southern elevation.

The open colonnade and two covered viewing areas are constructed with Tuscan columns supporting raised walkways protected by railings replaced in the later C20 and there is a band of mosaic work, also late C20. The colonnade and lower viewing areas have an identical strip of opaque glass providing illumination. The columns to the colonnade on the sea elevation have largely been replaced in fibreglass and the original water drainage, which originally ran through the columns, altered to bring it down externally. During concerts the lower level viewing area is protected by sliding doors set inside the curved colonnade and these are neatly stored in adjacent ancillary buildings when not in use.

The upper viewing platform is built of brick with a flat roof and is open fronted on the seaward side supported on seventeen faience columns and two end piers. The interior has four wide steps for the accommodation of deckchairs and the rear wall is hung with green faience tiles with a reeded top band in cream and black and a dark blue band near the base and black plinth. The roof railings were replaced in the late C20 not to their original design and the triple globular lights on columns are also replacements.
The lower viewing area is of identical size with an open colonnade at the front and similar multi-coloured faience tiling but there are no steps. The central courtyard, lower viewing area and colonnade are paved with granolithic paving with geometrical designed slab in red, green and yellow with some cement repairs.
The lower colonnade contains a bronze and granite memorial to a local orchestral musician who died on the Titanic in 1912.
HISTORY: This structure replaced a Victorian bandstand shown in an 1899 Frith photograph. The complex was built in 1935 to the designs of the Borough Council Engineer, Leslie Rosevere as part of a seafront improvement scheme.