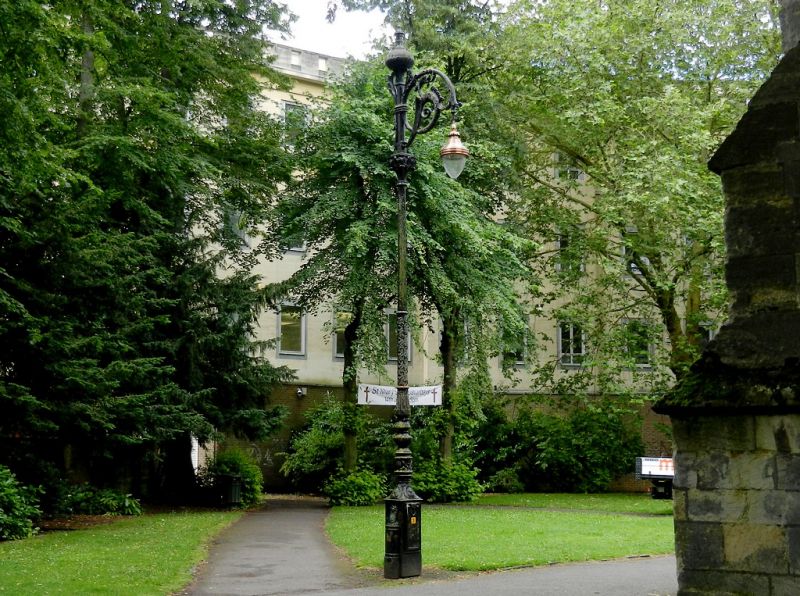 2 lamp posts. First lit 6th February 1897. Probably designed
by the Borough Engineer, Joseph Hall and cast by Messrs
McDowall, Stevens and Company Ltd, London and Glasgow.
Cast-iron. Bollard with half-bollards with shield and the
town's motto 'Salubritas and Eruditio'. Arched lamp-holder and
dragon infill with crowning onion finial. Intended for
electricity, and thus an early and remarkably elaborate
example of its type.
HISTORICAL NOTE: Cost »9.15s.0d. The motif is taken from the
coat of arms of the borough, granted to the town 11 years
after its incorporation in 1876. Moved to present position,
probably from the High Street.
Forms a group with 3 'Dragon and Onion' lamp-posts to south of
Church of St Mary. There are other examples in Cambray Place
(qv) and Trafalgar Street (qv).
(Sampson A and Blake S: A Cheltenham Companion: Cheltenham:
1993-: 7; Chatwin A: Cheltenham's Ornamental Ironwork:
Cheltenham: 1975-1984: 67).