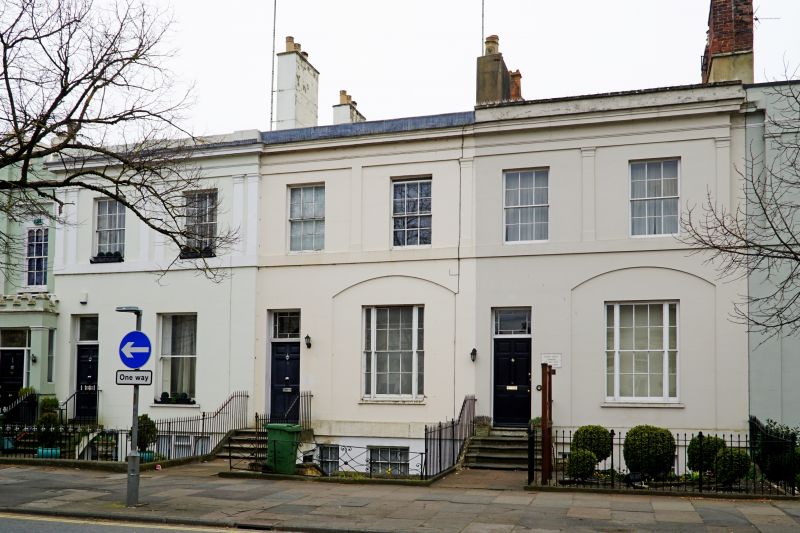 Entry Name: Numbers 2 to 7 and Attached Railings to Numbers 3, 4 and 7

Terrace of 6 houses, No.6 now an office, and attached
forecourt railings to Nos 3, 4 and 7. c1831-2, probably by
either John Forbes or WA Watson, architects. Stucco over brick
with slate roof, stucco party-wall stacks and iron railings.
EXTERIOR: 2 storeys with basement, 12 first-floor windows (2
per house). No.2 breaks forwards. Stucco detailing includes:
ground floor, wide segmentally-arched shallow recess except to
No.2 and horizontal rustication to No.7 drawn into voussoirs
over recess; first floor: continuous sill band (interrupted to
No.5) surmounted by Tuscan pilasters between windows, paired
pilasters to Nos 2 and 7; crowning frieze and cornice with
blocking course. First floor has mainly 6/6 sashes (where
original), ground floor has tripartite sashes to recesses:
mainly 6/6 between 2/2 (some 1/1 between 1/1); No.2 has 1/1
sash. Basements have 4/8, 6/6 and 8/8 sashes where original.
All windows in plain reveals, those to ground floor with
sills. Entrances: flights of steps to 5- and 6-panel doors
(where original with upper raised-and-fielded panels, lower
flush panels) with overlights, some retain decorative glazing,
doors to Nos 2, 3 and 4 at left, otherwise at right.
INTERIOR: retain original joinery and plasterwork; No.4 is
intact with dogleg staircase with stick balusters and wreathed
handrail.
SUBSIDIARY FEATURES: arrowhead railings with anthemions to
stanchions, to sides of steps throughout and lancet and
spearhead railings across fronts to Nos 4 and 7. No.3 has
scrolled lozenge balustrade to front.
HISTORICAL NOTE: built as part of the development of this area
undertaken for Joseph Pitt in 1825-42, the general layout
being designed by architect John Forbes. In 1874 Gustave Holst
was born at No.4, now the Holst birthplace Museum.
Forms a group with Bilbrook House, Winchcombe Street and No.1
Clarence Road (qv) and No.59 Portland Street (qv) which
complete the terrace.