Numbers 20 to 30 and Attached Railings 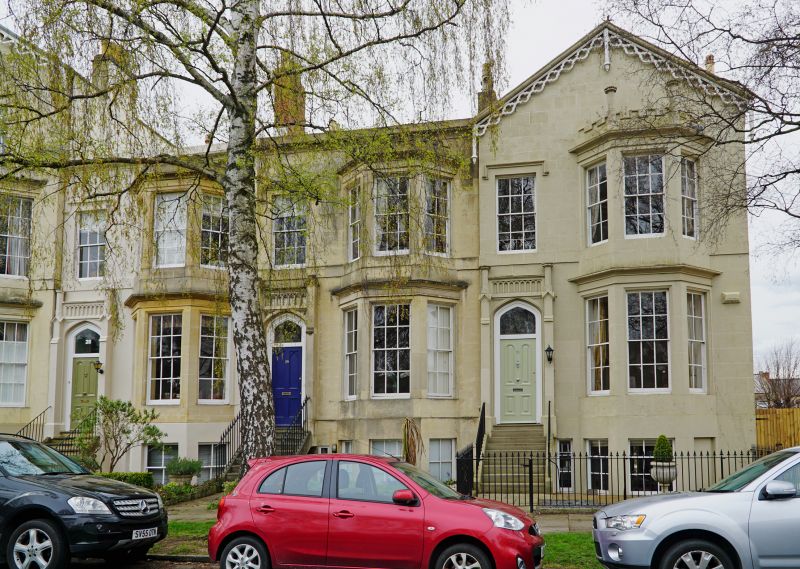 Terrace of 10 houses, now houses and flats, and attached
railings. Designed c1835-6, built 1840-44. Architect: HS
Merrett. Nos 20, 21 and 22 rebuilt to upper stages c1980-90.
Stucco over brick with slate roofs; tall brick and stucco
party-wall stacks with cornices; iron railings.
PLAN/EXTERIOR: symmetrical composition with Tudor-Gothic
elements, the central 5 houses have 3 storeys of which the
outer 2 are gabled, then two 2-storey houses and one 2-storey
with attic to gable house to ends; all on basements, 19
first-floor windows (No.20 has 1, otherwise 2 per house) of
which there are alternate 2-storey-on-basement canted bays.
Gothic detailing includes: battlements to bays; hoodmoulds;
4-centre-arched doorways in engaged porches with 'gabled
off-set buttresses', surmounted by slender octagonal turrets
with blind arcade between. Off-centre left entrances (except
to No.20 in left return), flights of mainly roll-edged steps
to mainly 4-panelled doors (some have lancet panels) with
overlights with glazing bars (those to Nos 22 and 26 have
Gothic glazing bars); to left return are off-set 'pilasters'
with cornice and C20 door within. Mainly 6/6 sashes
throughout, those to Nos 21 and 23 have blind boxes; some 8/8
sashes to basements. Decorative barge-boards to gables, except
to No.23. First-floor cornices to canted bays, first- and
second-floor plat bands, cornice and blocking course.
Decorative barge-boards to No.27. Rear: many 6/6 sashes
remain.
INTERIOR: some original joinery remains including shutters to
some windows, otherwise not inspected.
SUBSIDIARY FEATURES: mainly lancet and stick railings to sides
of steps. Forecourt balustrade to No.27 has Carron Company
double-heart-and-anthemion motif; lancet railings to No.30.
HISTORICAL NOTE: built as part of the development of this area
undertaken for Joseph Pitt in 1825-42 (the Pittville Estate),
the general layout being designed by the architect John
Forbes. Merrett drew up designs for houses on the west side of
Clarence Square on succeeding Stokes as Pitt's architect and
surveyor in 1835. The Square was laid out in the late 1820s,
building began in 1832; it was named after the Duke of
Clarence, who became William IV in 1830.