A Grade I Listed Building in Southsea, City of Portsmouth 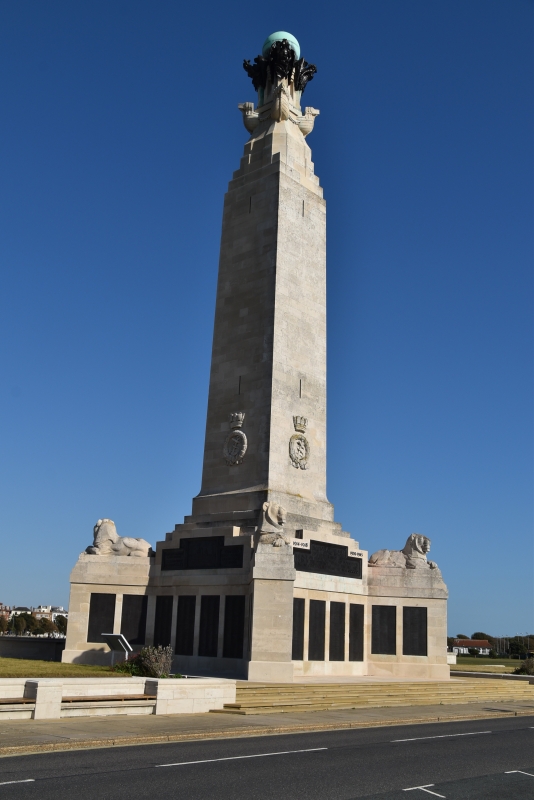 The Naval Memorial at Portsmouth, standing on Southsea Common, overlooking the promenade, and the sea beyond. Unveiled in 1924, the First World War memorial was designed by Sir Robert Lorimer with sculpture by Henry Poole. The Second World War extension, unveiled in 1953, was designed by Sir Edward Maufe, with sculpture by Charles Wheeler, William McMillan, and Esmond Burton. One of three naval memorials erected by the Imperial (now Commonwealth) War Graves Commission.

War memorial, standing on Southsea Common, overlooking the promenade, and the sea beyond. Unveiled in 1924, the First World War memorial was designed by Sir Robert Lorimer with sculpture by Henry Poole. The Second World War extension, unveiled in 1953, was designed by Sir Edward Maufe, with sculpture by Charles Wheeler, William McMillan, and Esmond Burton.

DESCRIPTION: the memorial takes the form of a massive stone obelisk, with four ships’ prows projecting from the apex, inspired by the rostral columns erected to celebrate Roman naval victories. The obelisk rises from a stepped square base with corner projections, each projection supporting a lion couchant. Low down on each side of the obelisk is the naval badge of an anchor within a laurel wreath, surmounted by a naval crown. The apex of the obelisk is stepped inwards; above the branching ships’ prows, are bronze figures representing the four winds, who bear a large copper sphere representing the earth. Between the lions are bronze plaques: that to the south bears the inscription, ‘IN HONOUR OF THE NAVY / AND TO THE ABIDING MEMORY / OF THESE RANKS AND / RATINGS OF THIS PORT WHO LAID DOWN THEIR / LIVES IN THE DEFENCE OF THE EMPIRE AND / HAVE NO OTHER GRAVE THAN THE SEA / AND THEIR COMRADES OF AUSTRALIA / SOUTH AFRICA NEWFOUNDLAND INDIA PAKISTAN / CEYLON FIJI GOLD COAST HONG KONG KENYA / MALAYA NIGERIA SIERRA LEONE AND BURMA / WHOSE NAMES ARE HERE RECORDED’. The plaques to the other faces commemorate actions with enemy land forces, single ship actions, and general actions at sea (including Jutland); the plaques contain images of naval action in low relief. Around the base are plaques carrying the names of the dead; the names are arranged by the year of death, and within each year, by rank and role.

The Second World War extension takes the form of a sunken garden area enclosed by quadrant walls, to the landward (northern) side of the obelisk; a low wall to the north closes the space, with a wide opening. The inner faces of the walls are lined with bronze plaques bearing the names of those lost during the Second World War. Standing against the walls at the centre, beneath the obelisk, are sculptural figures depicting two sailors on watch: a Royal Marine and a member of the maritime regiment of the Royal Artillery, both wearing duffel coats and holding binoculars; these are replacements of 2002, the original figures having become overly weathered. Between the figures is a stone plaque with a naval crown and the inscription, ‘1914-1918 1939-1945 / ALL THESE WERE HONOURED IN THEIR GENERATIONS / AND WERE THE GLORY OF THEIR TIMES’. A short balustrade section creates a view to the promenade to east and west. At the end of each wall is a shelter, set parallel to the promenade, reached from the obelisk area by steps following the curve of the walls; each shelter has an Ionic columned opening to the south. The shelters have copper barrel-vaulted roofs, and each has an entrance to the enclosure, with carving to the segmental tympanum above; Pegasus is carved in the outward-facing tympana; to the inward-facing tympana is a badge with two dolphins clasped to an anchor by a naval crown. There are three windows to the north sides of the shelters, and a single window to the ends. Inside, over the doors, are boys with dolphins, possibly Palaemon, protector of sailors and fishermen. To the south of each shelter, standing within the enclosure at the end of the curved walls, is another sailor. At the centre of the enclosure is a flower bed. Facing north are two pairs of tall piers, each pair surmounted by a lion and a unicorn. Low walls curve from the outer ends of the shelters, marking the edges of steps leading upwards to the obelisk; the walls turn to enclose the obelisk area. Stone paving surrounds the obelisk, and forms paths within the garden enclosure.

This List entry has been amended to add the source for War Memorials Online. This source was not used in the compilation of this List entry but is added here as a guide for further reading, 13 March 2017.

British naval personnel played an active and vital role in the Allied war effort and suffered significant casualties across the globe. In the first weeks of the conflict, the British Grand Fleet established a blockade in the North Sea that severely restricted the movements of the German Navy and merchant shipping. The blockading of German shipping lanes ensured that there would be relatively few encounters between British and German battleships during the war, but major naval actions did take place off the coast of Chile and at the Falkland Islands in 1914, and in the North Sea in 1915 and 1916. The Royal Navy also provided the army with crucial support during the Dardanelles Campaign in 1915 and protected Allied merchant shipping by escorting trans-Atlantic convoys throughout the war.

The most significant naval confrontation of the war, the Battle of Jutland, saw the British Grand Fleet under Admiral Jellicoe and the German High Seas Fleet under Vice-Admiral Scheer clash off the coast of Denmark on 31 May and 1 June 1916. The battle, which did not result in a decisive victory for either side, raged over 72 hours, engaging over 100,000 British and German naval personnel in 250 ships; over 6,000 British men were killed, and over 2,500 Germans. Over half of all British personnel lost at Jutland – some 3,400 men – are commemorated on the Portsmouth Naval Memorial. This includes most of the crews of the battlecruisers HMS Queen Mary and HMS Invincible, and the armoured cruiser HMS Black Prince.

Submarine warfare was also responsible for many deaths, whilst large numbers of warships and naval auxiliary vessels were lost to German mines. Accidents, too, had their cost: amongst those victims of accidents commemorated on the Portsmouth memorial are most of the crew of HMS Bulwark, which exploded while anchored near Sheerness in November 1914, and 127 men killed by the explosion of the mine layer HMS Princess Irene, also near Sheerness, in May 1915.

The Scottish architect, Sir Robert Lorimer (1864-1929) was principally a domestic architect, working on restorations of historic houses and castles, and creating new work in Scots Baronial and Gothic Revival styles. Lorimer was employed by the War Graves Commission, being responsible for Italy and Greece, and in 1919 also received the commission for the Scottish National War Memorial at Edinburgh Castle, which opened in 1927. The architectural sculptor Henry Poole (1873-1928) was Master of the Royal Academy’s Sculpture School from 1894 to 1928. Poole worked for many years in association with the architectural partnership Lanchester and Rickards on public buildings and monuments, including Westminster Central Hall and Cardiff City Hall. During the First World War he worked at the School of Camouflage established in Hyde Park by Solomon Joseph Solomon.

The Portsmouth Naval Memorial was unveiled by the Duke of York (the future George VI) on 15 October 1924. The memorial commemorates over 9,600 sailors lost in the First World War.

Following the Second World War, it was decided that the three naval war memorials should be extended to commemorate those killed in that conflict, with different treatments for each site. The architectural designs were by Sir Edward Maufe, from 1943 principal architect for the UK to the Imperial War Graves Commission, and designer of the Air Forces memorial at Runnymeade, with sculpture by Charles Wheeler, William McMillan, and Esmond Burton. Plaques were added with the names of 14,900 sailors lost in the Second World War. The extension was unveiled in 1953 by Queen Elizabeth, the Queen Mother.

The Naval Memorial at Portsmouth, unveiled in 1924, designed by Sir Robert Lorimer with sculpture by Henry Poole, together with the Second World War extension, unveiled in 1953, designed by Sir Edward Maufe, with sculpture by Charles Wheeler, William McMillan and Esmond Burton is listed at Grade I for the following principal reasons:
* Historic interest: as an eloquent tribute to those who served with the Royal Navy, and the sacrifices they made in both the First and Second World Wars, commemorating those who have no grave but the sea;
* Architectural interest: the First World War memorial, taking the form of a rostral obelisk intended as a mark for shipping, is a powerful naval symbol, whilst the Second World War extension makes an architectural contribution to the dignity and contemplative quality of the memorial as a whole;
* Sculptural interest: both parts of the memorial are enhanced by distinguished sculpture on naval themes, both emblematic and contemporary;
* Group value: the memorial stands on the Clarence Esplanade, within the registered Southsea Common. On the Esplanade are listed monuments commemorating men killed by yellow fever whilst aboard ship in the late C19: immediately opposite the naval memorial is one for the men of HMS Aboukir, and to the east is one for the men of HMS Trident; the Esplanade contains a number of other listed military and naval memorials. To the east is the scheduled Southsea Castle.