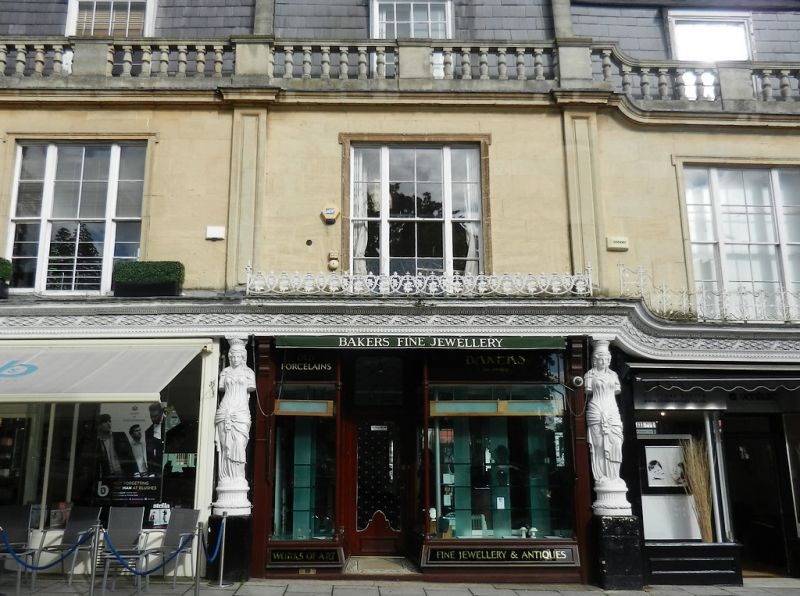 Entry Name: Numbers 1 to 23 and Hanover House (Premises of the National Westminster Bank)

Terrace of shops with flats over, now mainly storage.
c1836-45, with caryatids of 1840. Designed by WH Knight; at
least 3 caryatids are by Rossi of London, serving as models
for others by WG Brown of Tivoli Street, Cheltenham; National
Westminster Bank converted by Eric Cole c1970. Ashlar over
brick with mansard slate roof and terracotta caryatids.
PLAN: L-shaped with opening to lower, shorter part.
EXTERIOR: 2 storeys with attics, mostly 1 window each (Nos
19-23 have 2 windows. Ashlar detailing includes pilasters with
sunk panel to most party walls; tooled, eared architraves to
first floor 2-window ranges; cornice sweeps up; balustraded
parapet. First floor has 6/6 and tripartite 6/6 between 2/2
sashes where original. 8/8 and 6/6 sashes to mansard, further
attic dormers with casements. Mainly 6/6 sashes, those to bow
are curved on section; also to roof dormers. Rear: elevations
to Montpellier Street are good 3-storey, ashlar, first-floor
windows have pediments.
INTERIOR: noted as retaining some original plasterwork and
joinery.
HISTORICAL NOTE: although dated 1836 to the south end, Blake
points out that no other evidence suggests such an early date,
it is not shown on Griffith's 1838 Map and the earliest
reference occurs in 1841 to "2 additional shops". By 1841 the
north end of the Walk, opposite Montpellier Arcade (qv) had
been built, forming a covered entrance to the tree-lined walk,
leading from the Old Well and Imperial Spa to Montpellier (on
which the shops were to be built). Rowe illustrates the north
end of the Walk with bow and indicates that the shops along
this side were occupied by Mr Merrett, Cook and Confectioner;
Mrs Hacker's Magasin of Modes; and Mr Draper, Tailor; Rowe
does not indicate any other shops had been completed in this
development. Rowe describes, 'the bow front on the left of the
entrance .. occupied by two handsome shops, the windows of
which are separated by Caryatids - elegant Grecian figures,
representing Athenian virgins, dressed in their Panathenaic
costume'. Montpellier Walk was originally known as the Grand
Promenade.
This unique row of shops was described by Verey as, 'A

charming example of intimate Classical architecture' and is an
outstanding example of its type, both for its significance as
commercial architecture of the period and the C19 terracotta
revival.
The rear elevations of Nos 1-23 form a group with Regency
House and Nos 2-8 Montpellier Street (qv).
(The Buildings of England: Verey D: Gloucestershire: The Vale
and The Forest of Dean: London: 1970-: 140; Sampson A and
Blake S: A Cheltenham Companion: Cheltenham: 1993-: 18;
Country Life 16.1.1926; Rowe G: Illustrated Cheltenham Guide
1850: Cheltenham: 1845-1969: 26; Blake S: 'The Building of the
Montpellier Shops': Cheltenham Local History Society Journal:
1984-).