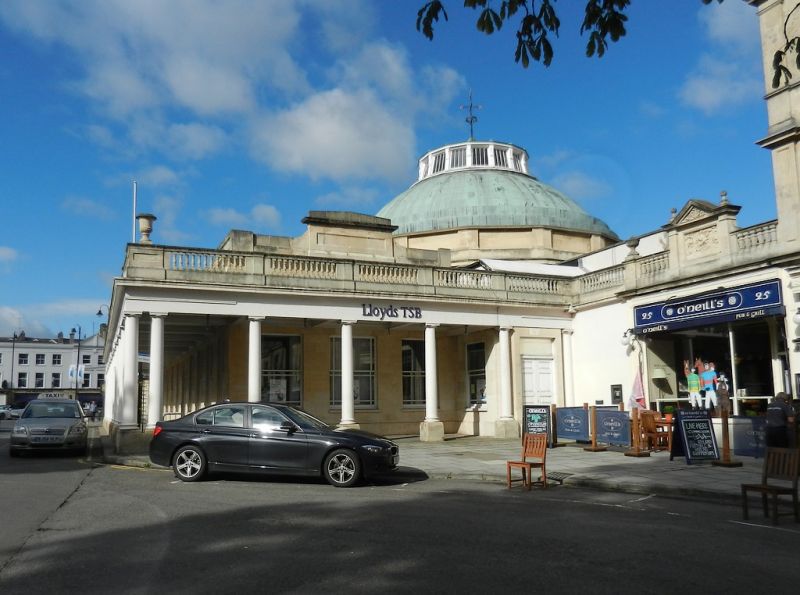 Includes: Montpellier Rotunda and Pump Room MONTPELLIER
STREET.
Pump room with reading room and billiard room, now banking
hall. In 1817 the long room and colonnade on south-east were
built, architect probably Underwood. Rotunda added 1825-6,
architect JB Papworth. Limestone ashlar walls, with copper
roof
EXTERIOR: colonnade is Doric with slender shafts on raised
plinths with attic bases and caps with echinus profiles.
Parapet with lion couchant. Circular room roofed with wooden
dome coffered internally. Externally covered with copper
following hemispherical shape of interior. Proportions similar
to Pantheon, and all light entering through lantern. Rear
facade has 4+3 windows, 1/1 sashes, off-centre entrance,
panelled double doors with sidelights in pilastered surround.
INTERIOR: the principal feature is the central
single-tall-storey, circular, domed assembly room. Around the
lower stage are pairs of Doric pilasters to recesses with
frieze of alternate square and oblong panels and entablature,
between taller pairs of Corinthian pilasters with panels
between each pilaster surmounted by continuous dentil
entablature with egg-and-dart moulding. Coffered dome and
central circular skylight with central rose and ornate frieze.
3 entrances, part-glazed doors with margin-lights and
sidelights with overlights, all curved on section; also 2
further inserted C20 openings.
HISTORICAL NOTE: the earliest building at Montpellier was the
Pump Room, opened as a wooden structure in 1809 (opened by
Henry Thomson) and rebuilt 1817. Papworth's Rotunda was
modelled on the Pantheon (Rome) and its proportions are almost
the same (56 feet high, 54 feet across). Furnishings were all
by Papworth but now unfortunately lost, as are the murals of
hunting and country scenes along the corridors. Waters were
pumped from 80 surrounding wells from 6am. Papworth came to
Cheltenham c1824 and designed a house for Dr Schoolbred; he
was retained by Henry Thomson and later his son Pearson
Thomson, providing designs for Pearson Thompson's home, Regent

House, Montpellier Drive (qv) and for the Lansdown Estate
(later taken over by the Jearrads). Underwood was the
architect of the Masonic Hall, 2 Portland Street (qv). Banking
on the premises probably dates to 1882 when the Worcester City
and County Bank had an agency in one corner of the building.
This was taken over by the Capital and Counties Bank, which in
turn merged with Lloyds in the early C20. In 1848 Jenny Lind
sang here and in 1891 the first performances of Gustav Holst's
Scherzo and his Intermezzo were given here.
(The Buildings of England: Verey D: Gloucestershire: The Vale
and The Forest of Dean: London: 1970-: 140-1; Sampson A and
Blake S: A Cheltenham Companion: Cheltenham: 1993-: 83; Blake
S: 'The Building of the Montpellier Shops': Cheltenham Local
History Society Journal: 1984-).