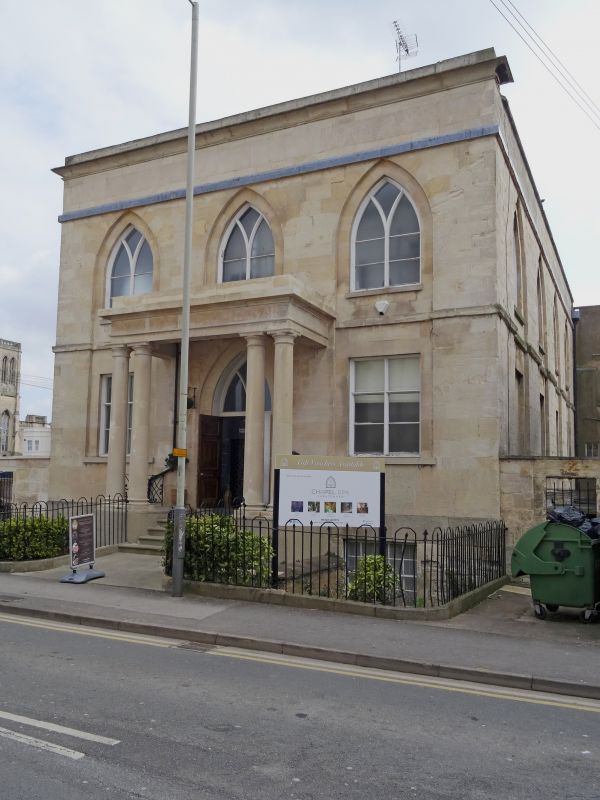 Chapel, now gym with attached arches, wall and railings. 1816
at the expense of Robert Capper, for the Countess of
Huntingdon's Connection; with portico added 1865. Cost
»5-6,000. Ashlar over brick with hipped slate roof. Plain
rectangular box with sill band, first-floor band and parapet,
(latter inscribed Countess of Huntingdon's Connection). Gothic
Revival style.
EXTERIOR: 2 storeys on basement, 3 first-floor windows. 2
tiers of windows, the lower tier have wooden mullion and
transom windows with fixed lights, the upper in pointed-arched
recesses with Y-tracery. Entrance: steps to central
pointed-arched doorway within portico with paired Roman Doric
columns. Crowning frieze, cornice and low parapet. Similar
4-window returns have similar fenestration. Basement has 10/10
sashes.
INTERIOR: retains galleries on iron column clusters , 2
staircases with stick balusters and wreathed handrails.
reputed to retain king post roof.
SUBSIDIARY FEATURES: pedestrian arches to right and left,
attached wall at left approx 1.5m high which extends for
approx 14m. Railings to sides of porch have scrolled lozenge
motif. Area railings are alternately arched sticks and
trefoil-headed.
HISTORICAL NOTE: Formerly known as Portland Chapel, this was
the first nonconformist Gothic Revival building erected in
Cheltenham; the portico may have come from another chapel. In
1819 it was gifted to the Countess of Huntingdon's Connection.
Rowe noted in his Cheltenham Guide, written in 1845 but
published in 1850 that the interior had `spacious galleries'.
Formerly had a iron chancel screen and font cover produced by
William Letheran's Vulcan Iron Works.
Little describes this as a `charming .. facade that happily
blends churchwarden Gothic windows with porch columns in Roman
Doric'.
Abuts to rear No.32 Portland Street (qv), probably built as